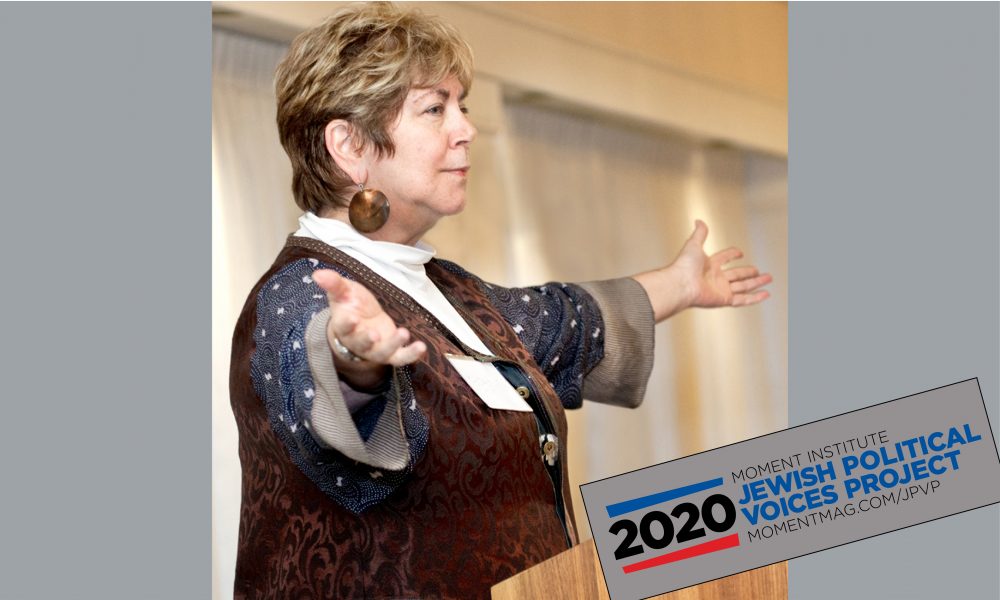 Hannah Rosenthal (68), a Democrat from Madison, WI, originally thought she would follow her father, a 16th-generation rabbi, into the family business. Instead, she became a “professional Jew” and a “professional feminist.” Rosenthal has held a range of political and government roles, including Midwest regional director at the Department of Health and Human Services (Clinton administration) and the U.S. State Department’s Special Envoy to Monitor and Combat anti-Semitism (Obama administration).

Trump turned out to be even worse than expected. His racism is far more obvious than I thought it would be. He said he would pack the courts, and he has. However, even that has been worse than I expected—as he nominates, and the Senate lap-dogs approve, judges that could not be confirmed in the past, judges that the ABA deems not fit for the bench, etc. in the name of law and order, he has actually sent federal law enforcement to fight peaceful protesters. He admires authoritarians and is showing how much he wants to emulate them. I think Trump is frightening.

He ran on fear and hatred and has delivered to a substantial degree. The wall has not been built, but he has put migrant children in cages. He promised to “lock her up,” but pardons the felons in his campaign. He promised to make international organizations pay more so they wouldn’t be “taking advantage of the U.S.,” but foreign countries now know they cannot count on us as allies. And international organizations have been weakened, as we depend on them to not only watch our backs but to fight our wars and share intelligence to protect us and the world

Has Joe Biden turned out to be the type of candidate you expected?

Biden has been very much as I thought he would be. He has the empathy and know-how to heed scientific information and recommendations.

Because of the pandemic, campaigning is totally new and restricted. Because I believe Trump will do ANYthing to win, he will promote many lies, conspiracies and fears. He will tell the American people that the election is rigged, as he did last time. He may start a war, anything to help him win. And he will continue to urge foreign governments to help his election. So he definitely has a chance to win.

Do you think Joe Biden has a chance at winning the election?

Yes, he has a good chance of winning. He must have a national Get Out the Vote strategy and he must emphasize his experience and empathy that understands the feelings of the voters. If mistakes occur, he must immediately take responsibility and fix it. He has to continue to show the importance of the election and of voting.

Joe Biden is exactly the right person at this time when the need to bring the country together is so paramount. Trump thrives on division. Trump does not understand what leadership is. He does not know how to broaden his support. He is left with his ever-narrowing base. I do think the Lincoln Project (Republicans supporting Biden) will continue to have a profound effect. Since Trump does not have an answer to “are you better off today than four years ago?” all he is left with is to delegitimize the election.

Biden’s 100 days agenda must be to get a national strategy for [dealing with] COVID-19 and other possible pandemics; have a diverse cabinet to show leadership, and understanding the racial and other challenges that plague us and are needed to unite the country.

I have huge concerns about the general election. Trump is trying to delegitimize it, we won’t know the winner for a week or two (mail-in voting) and he will try to do as much damage as he can. He has already threatened lawsuits that will take months, even years, to resolve. Trump’s administration has been called the most corrupt ever in our country by many many historians and politicians. It knows no end. And there will be foreign players and that too is a major concern. Putin needs Trump to win, he still has things he wants Trump to do for him…Trump has called for a postponement of the election. He wants to cut funding to the post office, which not only is the major form of communication for so many American people and businesses, but it is also the institution needed for mail-in voting. I think Trump has shown his disdain for honesty, for oversight, for rule of law, for the media that dares to do their job, for democrats, for minority racial and religious cultures, for women, for democracy, for the constitution, and the list goes on. My biggest concern is that we as a country cannot survive another four years of him and his enablers.

In-person voting must be there for people who want to vote on November 3rd. But amid this pandemic and god knows what else will be happening in a couple of months, there must also be early voting and mail-in options for all Americans.

COVID and BLM have affected the country in many extremely powerful ways.  The death of the beloved John Lewis has contributed to the changes. Trump’s racism has galvanized voters. The once red-leaning suburbs are finding him unacceptable. Watching the murder of George Floyd hit everyone personally, morally. The tragedy and incompetence of Trump’s response, or non-response to the COVID pandemic have awakened in people that Trump is dangerous and narcissistically all about him, and not them. It has changed life in our country in almost every way, and the loss of life in the hundreds of thousands of our friends, relatives, neighbors, teachers, healthcare professionals and others lay at Trump’s feet. So, I think both BLM and the pandemic has shown how weak and over his head intellectually Trump is, and has had a huge effect on voters.

I do think COVID will affect the turnout—which is why mail-in voting is so important. And which is why Trump is so against it. The more people vote, the more the reality of support for the winner will be. And as Trump himself said, mail-in voting will be the end of republicans winning elections.

The closing of voting locations will of course hurt turn-out. In Wisconsin, this occurred in the spring elections. In Milwaukee, which usually has over 120 voting locations, there were 8! When the democrats saw this was happening, especially in minority neighborhoods, the push for mail-in voting was accelerated. The strategy of fewer locations is an attempt to restrict who and how many vote. One of many voter suppression efforts.

At this point, what is your preferred method of voting in November?

I have already voted by mail, and have requested an absentee ballot for November.

The handling of the virus in Wisconsin has been totally political.  Before Governor Evers was sworn in, the legislature reduced his power. When, as governor, he called for extended restrictions, the Republican legislature went to the State and U.S. Supreme Courts to stop it – which they dutifully did. Hence, our rate of infection has gone up. It really is remarkable how politicized this public health crisis has become. It is the only strategy that the president seems to think is leadership. It is not leadership. It is a shanda.

All of us want kids to be back at school safely. We want the teachers and staff to be safe. We are not there yet. My daughters are not sending their children, my grandchildren, back to school and won’t until it is safe to do so.

In answering your questions all these months, who knew there would be a pandemic that would change everything about the campaign—the issues surrounding COVID-19, the economic collapse, not to mention Black Lives Matter.