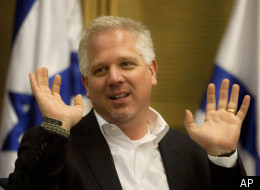 Glenn Beck is making quite a splash in the Jewish state this summer. This August, Beck will host “Restoring Courage,” a three-part event that Beck’s website describes as “an opportunity to demonstrate to the world that Israel does not stand alone.” The first event will be for American Christians “to get the Christian community in America to wake up and start standing up [for Israel].” The second will be more explicitly political in nature, purportedly including Senator Joe Lieberman, GOP presidential candidates Rick Santorum and Herman Cain, and two other presidential candidates yet to be revealed. The final August 24 event that, according to the Jerusalem Post, “would be attended by more than 30 American national political figures, 70 international politicians and citizen delegations from 100 countries around the world, including Bahrain” will be held at the Southern Wall excavation site in Jerusalem’s Old City.

Beck pledges to make this event bipartisan, not a rally against President Obama and his administration. For Beck, “If it’s just an event, we failed…It’s a launch of a movement of decent, like-minded, freedom-loving peaceful people who know the answer won’t come from Washington or Copenhagen. It’s not going to come from our political leaders, but from the people. It’s a freedom movement.”

However, not everyone is quite as enthusiastic. On the American home front, Beck has received criticism, especially from left-leaning press and groups. In response to a question about Glenn Beck’s participation in a summit in Israel, Jeremy Ben-Ami, president of J Street, replied that association with Glenn Beck is “not in the interest of the American Jewish community.  Alluding to a “proven track record of anti-Semitism,” Ben-Ami concluded that “this kind of friend Israel doesn’t need.”  In a recent Huffington Post piece titled, “Glenn Beck Defiles the Holy Land,” commentator MJ Rosenberg further draws out this accusation of anti-Semitism, describing Beck as treyf who is using Israel “as a disinfectant to cleanse him of the stink of anti-Semitism, racism, and proto-fascism. Without Israel, Beck is just another right-wing bigot and crackpot. But with it, he becomes almost legitimate and so does the dangerous and ugly portrayal of Jews that has become his trademark.”

Some Israelis are not impressed with Beck’s message either, but some for unexpected reasons. An an interview with Channel 10 news last week, during the second of his three solidarity trips to Israel (the first was on Israeli Independence Day), drew criticism that Beck may not be conservative enough.  Although he told a Knesset committee that the Israeli Palestinian conflict “is about the destruction of Israel and the end of the Western way of life,” his comments to Channel 10 news that “I’m not against a Palestinian state. I’m not here for a political solution,” elicited a sharp response from nationalist parliamentarians. National Union MK Arye Eldad told Beck “I believe in a two-state solution, because I remember that there is already a Palestinian state in Jordan…Israel belongs to the Jews. We need to end the occupation—the Muslim occupation of Israel that began 1,300 years ago.” MK Ayoub Kara (Likud) added “There were never Palestinians in this area.” In addition, Beck has never advocated freeing Jonathan Pollard from prison, a cause which MK Tzipi Hotovely (Likud) and MK Marina Solodkin (Kadima) mentioned to Beck at the meeting.

Despite the flack Beck is receiving on all sides of the Israeli aisle, whether you like his politics or not, his heart seems to be in the right place. In a video on his website, Beck describes in detail the brutal murders of the Fogel family last March, and cites that most Americans had no idea of the atrocities as a platform for the importance of his initiative to stand with Israel. When asked about a segment on his former Fox News show dedicated to the heinous acts, Beck replied, “You have a horror show that Hollywood spends months dreaming up. You have villains like I’ve never seen before,” lauding Israelis’ courage and hope despite such suffering such tragedy. Beck also has plans to visit Tamar Fogel, daughter and sister of the victims, as part of this summer’s upcoming trip to Israel. Glenn Beck’s message is clear: “Israelis may like to hear and see that you’re not alone…There are millions of people [who support Israel] that you don’t see, because the media doesn’t want to tell their story, either.”

Love him or hate him, as MK Danny Danon (Likud) quipped, “If we didn’t have someone like Glenn Beck we would have had to invent someone like him.”