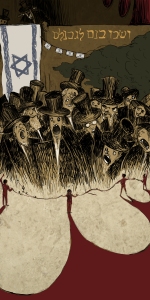 Unlike most students who come from abroad to study in Jerusalem, Emily Henochowicz was initially unconcerned with politics and religion.  She arrived this winter at the Bezalel Academy of Art and Design as a student of animation. Her religion and Israeli-born father were peripheral factors in her decision to spend a semester studying in the City of Gold.

Henochowicz’s regional interests expanded during her semester abroad, as she became a passionate activist against Israeli policies in the West Bank.  A little over two weeks ago, she was brutally injured by Israeli policemen while protesting at the Qalandiya checkpoint, just north of Jerusalem.

Recuperating back in the States, I had the opportunity to chat with Henochowicz about her artwork, activism and role as an Internet hero for those opposing Israeli policies toward the Palestinians.

This Passover, Henochowicz first became involved after witnessing a demonstration in Sheikh Jarrah, the East Jerusalem neighborhood in the midst of an ongoing legal dispute over competing Israeli and Palestinian property rights. The neighborhood is the site of regular protests in solidarity with the Palestinians facing eviction by Israeli Supreme Court decisions, favoring Jews holding Ottoman-era land deeds.

Henochowicz’s initial visit to Sheikh Jarrah was solely as an observer.   She recalled a group of Ultra-Orthodox boys chanting prayers, taunting a Palestinian family who stood in the street in front of the house they’d lost.

“They’re using prayers that I’ve heard before, that I know.  And I just thought, ‘They’re not real Jews!’”

That day, Henochowicz met a volunteer from the International Solidarity Movement, a Palestinian-led organization advocating nonviolent protests towards the Israeli military presence in the West Bank.

The ISM volunteer engaged Henochowicz in a discussion about whether one should act upon things he or she believes are wrong.  Henochowicz realized she’d never been the person who acted upon her beliefs.  She decided to lose the debate, and asked some introspective questions.

Over the next two months, Henochowicz became a frequent ISM activist, protesting Israeli settlement building and military actions around the West Bank.  Following protests, she’d illustrate reflections of the scenes she had observed.

Henochowicz saw many protesters writing reports or posting photographs after participating in demonstrations.  These accounts, she explained, are pieces of data, realistically representing the events of a protest.  Unlike other activists, Henochowicz considered communicating the events she saw as a separate process.

She inserted her emotions and opinions into her cartoon-like animations, published on her blog Thirsty Pixels.  In her reflection on her first visit to Sheikh Jarrah, Henochowicz illustrated praying black hat Ultra-Orthodox men rising high above small Palestinian children, who joined their hands by holding tree branches in the street.  Above the men’s hats are the Hebrew words “thy sons shall return to their borders,” a biblical phrase posted by the Israelis representing their claims to the neighborhood.

Before coming to Jerusalem, Henochowicz’s says her art had never pushed a political agenda per se.   However, she says she’s fascinated with the human form, probably because of the hyperconscious attention to body image growing up female in the United States today.

“I like the idea of using illustration to engage people in some of the issues. What I’m giving you is an opinion; it’s through my eyes. It also gives you the emotional impact of what I’m seeing.  Seeing a cartoon character is different than seeing a person because it’s an interpretation.”

On May 31, the day that the Israeli Navy intercepted the Gaza bound “Freedom Flotilla” Henochowicz participated in a counter-protest in between Jerusalem and Ramallah, the seat of the Palestinian Authority.

Standing on the Ramallah side of the Qalandiya checkpoint, Henochowicz waved a Turkish flag in solidarity with the activists killed and injured aboard the Mavi Marmara.

Avi Issacharoff of Israeli daily Ha’aretz described witnessing the protest in boredom, as “yet another meaningless confrontation between Palestinians and police.”

“Meaningless” turned critical when a canister of tear gas shot by Israeli police forces from a relatively short distance hit Henochowicz’s face. She lost her left eye and fractured her jaw and cheekbone.

After being shot, Henochowicz recalls “a wonderful Palestinian woman” running to catch her before she fell to the ground.  She remembers her initial reaction was of relief.

“You get shot and you think your brain will be fine. I’m alive and my brain’s okay.”

Henochowicz was taken to Palestinian Ramallah Hospital for an x-ray before being transferred to Hadassah Hospital in Jerusalem.  While at Hadassah, representatives from the American Embassy stopped by to check on her progress.  Henochowicz, also an Israeli citizen, says she would really like an apology from the Israeli government, although she doubts one will come.  Her family is currently filing a criminal case against the Israeli government.

Henochowicz believes the situation of the Palestinians in the West Bank is an American issue, because of the United States’ deep connection to the conflict.

“As Americans, we support the weapons that shot me.  For what I know, [the canister that] hit me was made in New Jersey.”

Henochowicz plans to get a prosthetic eye implant although she has reservations about its artificial nature.  She joked that she really likes little kids and would hate for “them to feel freaked out” when they saw her missing eye.

Although Henochowicz admits to feeling a little bit uneven after losing her eye, she doubts her injury will influence the way she draws.  What has changed most is the scope of her audience.  Following her injury, she received dozens of recuperation wishes on her blog and Facebook fan pages appeared on the internet, proclaiming her a hero and martyr for the Palestinian cause.

“It’s strange to think that something so random and horrible should end up being good in my life. I don’t know how positive and how negative it is.”

In the fall, she will return to Cooper Union School of Art in New York to complete her degree.  Henochowicz hopes to continue to visually communicate on behalf of the Palestinians, although she doubts she’ll be observing much from New York.

One thought on “Following Her Vision”