Entire books have been written on Potter philosophy and Torah wisdom (see Moment’s interview with Dov Krulwich), and some commentators have posited that its magicians—chosen people  misunderstood by others—are essentially Jewish.  Yet, others also a postulate a rather unfortunate perspective that J.K. Rowling and her Harry Potter series are guilty of perpetuating an antisemitic slur: underhandedly equating the book’s loathsome goblins with Jews.

The goblin-as-Jew allegation deserves assessment, partly because antisemitism is so serious, but also because if the complaint is true, millions of Jews, including yours truly, could not continue to happily reread and rewatch one of the greatest stories ever told.

The theory—as put forth by one its leading proponents Matt Zeitlin—is pretty simple:

As further evidence, Zeitlin offers a side-by-side comparison of an antisemitic cartoon with the Warner Brothers’ rendition of a Rowling’s goblin:

Once the goblin-Jew connection is made, it’s easy to prove a dislike for Jews.  After all, Rowling’s distaste for goblins is quite evident.  Rubeus Hagrid – a character inclined to see the good in all people and creatures – warns Harry about goblins in the first 100 pages of the seven book series: “They’re goblins Harry. Clever as they come, goblins, but not the most friendly of beasts.” Deathly Hallows portrays goblins as impassionate neutrals in a fundamentally moral war who ironically play something of a Switzerland banking for the Nazis (Gringotts goblins).  In Goblet of Fire, goblins are more concerned with their money than the terrorization of innocents (World Cup Dark Mark raid).  And, as judged by the only goblin we really get to know in detail – Griphook – goblins are untrustworthy.

This line of reasoning seems compelling, but to foist it on Rowling and the Potter series seems unjust.  For one, Rowling does a great deal of borrowing in her stories.  She followed established conventions, endowing her dragons with fiery breath and wings, giving her trolls dim wit and powerful clubs, and her goblins with short stature, hooked noses, and greedy manipulation—archetypes that existed well before Rowling ever put pen to paper.  Perhaps Rowling drew her goblin based on the goblins in the Nineteenth Century poem “Goblin Market,” in which goblins lure and trick with “evil gifts.”  Or consider JRR Tolkein’s goblin—“A foul creature…slightly smaller, sometimes hunched over or appearing to walk and run with limps.”  Or just look up goblin in the dictionary and you find a definition that largely resembles Rowling’s creatures.  Perhaps the goblin character has its origins in anti-Semitism, but Rowling can hardly be convicted of unjust commentary for using a now-familiar Western literary character.

Additionally, the debate over whether the goblin character has its roots in antisemitism is wholly unaligned with Rowling’s professed views on Jews. In 2004, Rowling visited a Holocaust Museum and compared the hated “mudblood” and “half-blood” terms used in Harry Potter with the antisemitic propaganda of the Nazis: “If you think this is far-fetched, look at some of the real charts the Nazis used to show what constituted Aryan or Jewish blood.”  Rowling has also gone on record saying that her evil character—Lord Voldemort—is modeled in part off of Hitler.  Both comments won her comments of praise from Jewish organizations.

Then there are the movies—in which Rowling played an active oversight roll.  The actor that plays Harry Potter, Daniel Radcliffe has a Jewish mother, and the film company that produces the movies, Warner Brothers, owes its start to Hirsz, Abraham, Szmul, and Itzhak Wonskolaser (later changed to Warner).

In the eyes of this aspiring Gryffindor, we Jews can enjoy—without misgiving—the latest, and final, Harry Potter movie.

Interested in the affect of antisemitism in Hollywood? Read about the The Epic Battle In Hollywood Over The Holy Land. 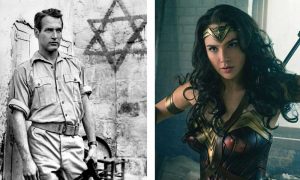