Home / Politics / Debate | Should There Be Medicare for All? 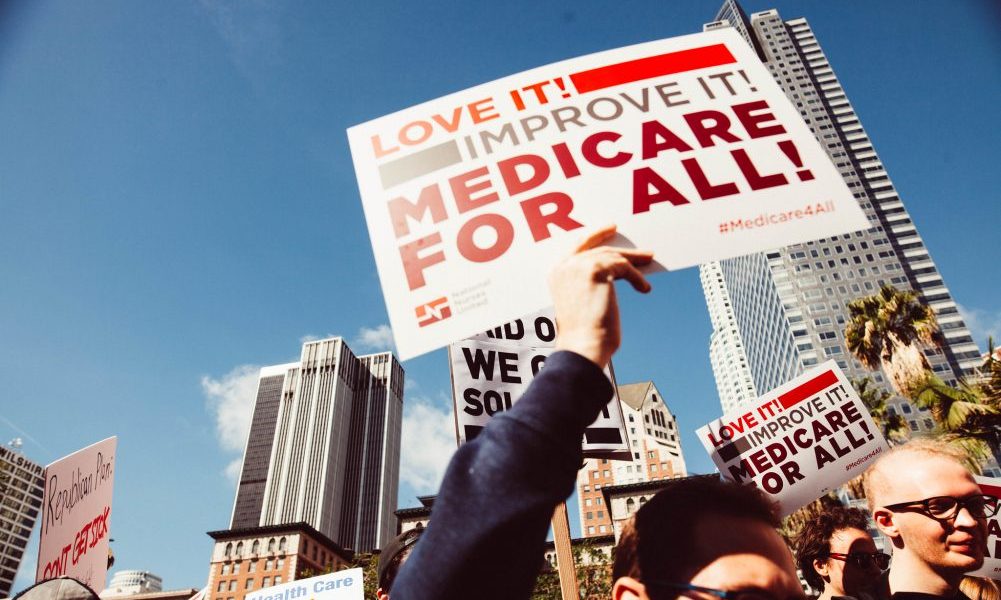 David Dayen, executive editor of The American Prospect, is an award-winning author who writes frequently about Medicare for All for numerous publications.

Stuart M. Butler, a senior fellow at the Brookings Institution, directed the Center for Policy Innovation at the Heritage Foundation until 2014.

Yes: It’s the Most Affordable, Moral and Effective System

Should there be Medicare for All?

Yes. I believe the most affordable, most moral and most effective system of providing health care as a human right to all citizens of this country would be to move to a single-payer-style system. Countries across the world accomplish this in different ways. I believe the most efficient is the Canadian one, with a Medicare-type setup—a government-run single insurance plan that everyone is subject to, funded by progressive taxation.

What’s worth saving in the health care system we have? What are the gaps?

At the very top, if you can afford it, American health care is quite good. But not everyone can afford it. Medicare has very low administrative costs and pretty high satisfaction ratings. Extending that to the whole population seems like a natural step. Senator Bernie Sanders’s plan seeks to do that, at least in broad terms. One difference is that in other countries you’d see small copayments, not necessarily just for dental and vision coverage, but for all services. Sanders proposes eliminating all such fees. The question is whether that will create a utilization issue: If it’s free, if millions of people can see a doctor without any restrictions, you’d expect to see more use of the coverage. The problem with that isn’t that people would somehow use “too much” health care. The problem is limitations on the supply side—the lack of available doctors. One thing that will be a challenge if we ever move to this system is making sure we have enough medical professionals. There’s a sort of academic medicine cartel that keeps down the number of doctors, so they can command higher salaries. There’s accreditation, and there are also laws in many states that prohibit nurse practitioners from seeing patients even if they are fully accredited to do so.

Why is health care so expensive? Can government help?

Our health care system today is increasingly concentrated into large corporate interests that have a major profit incentive to increase the cost of health care. We have networks of hospitals, outpatient facilities, prescription drug companies and so on down the line, from supported buying programs that increase the cost of medical supplies, to pharmaceutical middlemen that increase the cost of drugs. That corporatization of health care is why our system costs twice as much as any other in the world while delivering less or the same. Medicare for All says the key is having a government entity dictating those prices. But we’ll have to break up the concentration of health care companies first, before we get into a negotiation process, because otherwise the health industry can buy the political system, as it has until now. That happens even with a public option. Washington State created a public option last year, but by the time the health care lobby got done with it, it cost so much that it wasn’t an affordable choice for families.

The insurance and the drug companies are seen as the popular impediments to reform. But the reality is quite different. The hospital networks and doctor groups are the main funders of attacks on health care reform and have been for a long time. They’re not talked about, and for good reason—your doctor heals you, and the insurance company bills you, so it’s natural for politicians to blame the insurers for preventing reform. But if cost is the main issue, you have to look at these hospital groups. This has not been a focus of the single payer movement, and it should be.

The government absolutely has a role to play if you believe health care is a right, not a privilege. It should promote the general welfare, to use the Constitution’s phrase. People say we should rely on the free market, but health care is a different kind of market—you don’t break your leg and then shop around for the best price to have your leg fixed. Those prices aren’t transparent, and you don’t pay them. You’re not even in on the transaction. So trying to treat health care in a laissez-faire way where the government gets out of the way of the market just does not work. I think both parties understand that. You’ve seen the Trump administration talk about lowering the price of prescription drugs. Even if the Affordable Care Act is repealed, they know government has to play a role in making sure that people can get quality and affordable health care. Emergency rooms are open to all comers because of a law Ronald Reagan signed. There is broad consensus that government has to do something, just differing views on what. My view is that we should take our cue from the rest of the world and do what works in so many other countries—adopt a single payer system.

Is health care a moral right?

It’s a moral and ethical right. If you tell people in other countries that your health status in America is dependent on the amount of money you have in your wallet, they’re horrified. The difference in life expectancy along socioeconomic lines has gotten wider in recent years—the poor don’t live as long as the rich, and that’s a moral failure on our part.

Do Jewish ethics say anything about access to health care?

No: Expanding a Program We Can’t Pay for Is a Mistake

Should there be Medicare for All?

No. There should be a program that provides affordable, adequate access to health care for everyone, but I don’t think Medicare for All is the right way to achieve that objective. First, Medicare itself is out of balance financially, and expanding a program that we can’t pay for by adding more people is not good for the nation. Second, there’s a lot of magical thinking about Medicare for All—as if it gives inexpensive or even free care and somehow you can also make the numbers work for taxpayers. That’s really not the case. And third, most working Americans have health care through work or through the Obamacare exchanges, and politically it will be very difficult to scrap what they are used to. A more effective approach would build on what we have and allow continuous experimentation through waivers for states. We’re doing that already with the exchanges and with Medicaid. I opposed Obamacare as it was going through, but not because I was against the basic approach, which was not that different from the approach of many Republicans. Obamacare made significant improvements and filled in a lot of gaps, and that’s how Americans like things done. They don’t like radical change.

If the U.S. health care system were a separate economy, it would be the fifth largest in the world, bigger than Britain’s. So to say we’re going to change that with a Medicare for All bill in Congress, enacted the way things are done in Congress nowadays—I mean, what could possibly go wrong?

What’s worth saving in the health care system we have? What are the gaps?

A lot of conservatives had argued for a loose marketplace of subsidized health plans in each region. That’s what the exchange system does. I would like to see that expanding over time and the employer-based system shrinking. I think Medicare is a crown jewel—especially Medicare Advantage, where you pick a private plan, and it has to provide the equivalent of Medicare benefits.The plan managers get a fixed amount per enrollee and can redesign or restructure the services. A third of retirees and almost half of new enrollees are in such plans. If Senator Bernie Sanders were talking about Medicare Advantage for All, then I think we could have a conversation. But he isn’t.

On coverage, we’ve lost some ground. When Obamacare was put in place, states were required to cover all lower-income adults by expanding Medicaid. The Supreme Court overturned that, so now it’s optional for states. A lot of people now fall through the gaps—they don’t qualify for subsidies or Medicaid, but they can’t afford the exchanges. Obamacare also included a commission to get Medicare back on track financially. That’s been repealed, so we don’t have good ways to tamp down its costs. Sanders doesn’t emphasize cost control. People on the left have opposed every serious step to control Medicare costs, but now they say, “Give us Medicare for All and we’ll get the costs under control later.”

Why is health care so expensive? Can government help?

A lot of the high charges mean literally nothing. As a health economist, I’m amazed at them. The real question is, what is Medicare going to pay? If you look at your benefit statements, Medicare pays just a fraction. Government can help rein in costs by setting a real budget in the programs it administers. It flinches from it, for instance in Medicare, but it could. Government can also alter the tax subsidies to make them more efficient.

Is health care a moral right?

I use the term “community right,” which means that as a society evolves, people collectively begin to feel certain things are a right of membership. We say we have a right to a K-12 education, but you can go to other parts of the world where it’s clearly not a community right. Today we see affordable access to basic health services as a community right of that kind.

Do Jewish ethics say anything about access to health care?

Absolutely. The notion that we treat the stranger the same as ourselves is really important.  There’s a very strong Jewish impulse to deal with these gaps. I know a lot of people on the progressive side who are Jewish, and we have a slightly different conversation together about health care than we would with others, starting from Jewish premises of what the goal should be and what is just, even if we disagree intensely on how to get there. Health care is a moral issue, an economic issue and a technical issue, and you have to get each one right. I don’t know of any Jews who don’t think everyone should be covered to an adequate level. But we disagree on how. For instance, on covering high-risk populations who run up high costs: The Obama administration said those people can’t be charged more for insurance. The problem is that if you’re an insurer, you don’t want them. People on the right might say, let’s set up a different program for high-cost people and subsidize it directly, and don’t raise other people’s premiums. This administration thinks that’s a much better way. That’s a very appropriate, vigorous and sometimes acrimonious debate, and there are Jewish friends of mine on both sides, but we all want to get these people covered, and that’s the agreed moral bottom line.

I have to say that many on the right who raise appropriate technical challenges about ways of covering people are then accused of not wanting to have them covered. I’ve faced that accusation often, and I resent it. I don’t like people who don’t know me reading things into my policy positions.