Debate | Should Jews Still Be Democrats? 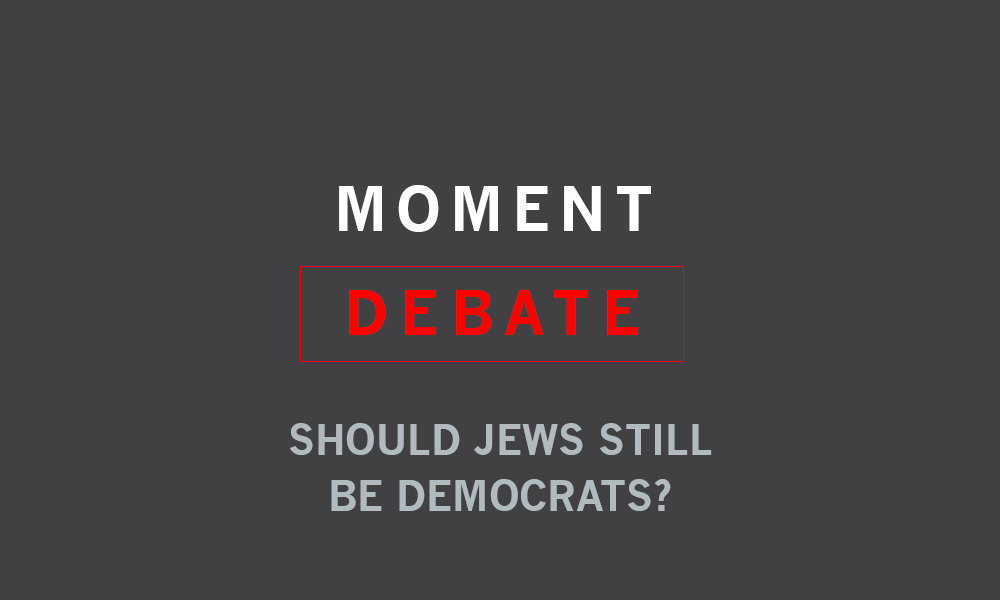 Debate | Should Jews Still Be Democrats?

Steven Israel served as a U.S. Representative from New York from 2001 to 2017. He is director of the Institute of Politics and Global Affairs at Cornell University.

Norman Coleman served as a U.S. Senator for Minnesota from 2003 to 2009. From 1994 to 2002 he was mayor of Saint Paul, Minnesota. He is currently national chairman of the Republican Jewish Coalition.

Should Jews Still Be Democrats? | Yes

Jews have traditionally voted disproportionately for Democrats, even when they were expected to do otherwise. Has anything changed this time?

Yes—even more Jews will vote for Democrats in 2020. Even putting aside every other motivation, they were persuaded to support Democrats when Donald Trump said that there were fine people marching on both sides of a neo-Nazi protest. The presidency is at the top of the ticket, and that informs, defines the environment for everybody else on the ballot. For American Jewish voters, this is the most urgent election in our history when it comes to our place in America. All the issues that impact American Jewish life, from supporting Israel to supporting the norms of democracy to supporting health care and the environment, are embedded in the decision to vote Democratic. The bottom line is tikkun olam: Do you want to repair the world or do you want a world that is regressing?

What are Jews looking for, fundamentally, in a president? In a government?

The bottom line is tikkun olam: Do you want to repair the world or do you want a world that is regressing?

Are there things Jews should fear in a government, or strive to avoid?

The American Jewish community should have very deep concerns about a government that abuses its power, that uses its tools to vilify and oppress people. As Jews, we have unique experience with governments that have treated us as enemies of the state. We ought to stand up to even the slightest steps by a government in that direction—steps like trying to suppress the vote or impede the right of people to mail in their ballots, or constantly tolerating anti-Semitism. When President Trump vilifies any minority group, he is giving license to bigots to come after the Jewish community. He vilifies anybody who disagrees with him, he vilifies judges whose opinions he disagrees with, he vilifies the Muslim community. He himself has engaged in distinctly anti-Semitic tropes. Put it all together and you have an administration that sanctions and licenses bigotry to an extent never before seen in this country. And if we don’t stop it, it’s just a matter of time before it reaches us.

What’s the most important recent change for Jews in the American political landscape?

Anti-Semitism was always present in American politics and government, but it was basically hidden. Most people were embarrassed to express it. Now they proudly display swastikas in their marches. Now you have QAnon, which propagates anti-Semitic tropes and gets publicly praised by President Trump, and anti-Semites who believe it’s okay to be anti-Semitic because the president looks the other way. And finally, now you have reported incidents of anti-Semitic crimes, violence and harassment skyrocketing as never before.

Is support for Israel the most important factor for Jews to consider in voting?

The polls tell us that while most American Jews deeply support and value Israel, it rarely lands in the top three motives influencing their vote. Bipartisan U.S. support for Israel is an imperative, and it should be one of the priorities that voters have when they make their judgments. I was very proud to be a Democrat in Congress when a Democratic president, Barack Obama, rushed Iron Dome missiles to Israel after Hamas attacked. Within hours of those attacks, the U.S. ambassador to Israel, Dan Shapiro, notified the White House of an urgent request from Israel to fund the replenishment of those missiles. The president said, “Get it done.” There’s a narrative pushed by Republicans that Democrats don’t stand by Israel, but there are a heck of a lot of Iron Dome missiles that very impactfully say that is wrong.

Look, I was in the Democratic leadership and opposed the Iran deal, and I had a 25-minute conversation with President Obama about it. I respect judgments for and against it. But if you’re voting in this election based on that one issue and ignoring the rise of anti-Semitism, the assault on health care and the attack on our environment, I realize I’m not going to persuade you. It would be inconsistent of me not to praise President Trump for good things that happened on his watch, things I supported when I was in Congress. He deserves praise for the United Arab Emirates peace deal, though it was discussed and negotiated over the span of the Bush and Obama administrations. He deserves credit for that. But I strongly criticize him for his failures toward the Jewish community.

Should Jews Still Be Democrats? | No

Jews have traditionally voted disproportionately for Democrats, even when they were expected to do otherwise. Has anything changed this time?

A lot has changed. I grew up in Brooklyn, in a Jewish household, in a Jewish neighborhood. I never met a Republican until I went to college. But the world has changed, and the Democratic Party isn’t the party of my grandfather, or even of my father. It’s moved far to the left. Its leading voices are the voices of Bernie Sanders and Alexandria Ocasio-Cortez, who are decidedly anti-Israel. Many of those voices support BDS, which is anti-Semitic and opposed to the existence of the Jewish state. So the party of JFK is not the party of today. We don’t have to be genetically Democrats anymore; we can vote differently from our grandparents.

What are Jews looking for, fundamentally, in a president? In a government?

Jews are Americans, and I would hope that when they sit at the breakfast table the most important thing on their minds is whether they have a job. Putting aside personality problems, this president has brought about an economy with the lowest rates of unemployment for Black and Hispanic workers, after inheriting the slowest post-WWII recovery from the Obama/Biden administration.

We don’t have to be genetically Democrats anymore; we can vote differently from our grandparents

Public safety is critical to us not just as Jews but as Americans. The Democrats at their convention couldn’t even bring themselves to mention the violent protests in the streets. I’m a great believer in social justice, but it depends on social order. We need public safety so we can feel free to express the things we believe.
The safety and security of the Jewish state are, I hope, close to the hearts of most Jews—more than for Americans in general, though today if you survey the Christian community, many are strongly supportive of the Jewish state.

Are there things Jews should fear in a government, or strive to avoid?

We’re an entrepreneurial group, by and large, because we’ve had to be for our own survival. So governments that suppress the entrepreneurial spirit through regulation, that seek to suppress free enterprise and the ability to be creative and innovative, are something we should worry about.

What’s the most important recent change for Jews in the American political landscape?

The biggest change for Jews is the rise of the so-called progressive left in the Democratic Party. If you go to a Republican Party gathering and say, “I stand with Israel,” that’s an applause line. That’s not a line you can give at a Democratic Party rally. Not to say there aren’t Democrats who support Israel—there are. But at a rally of the faithful, of the base, it’s not an applause line anymore. Support for Israel used to be bipartisan, and I pray it will be again in the future, but for now, there’s been a power shift.

The Democratic Party supported the Iran deal that posed an existential threat to Israel. On college campuses, the left is the bastion of anti-Semitism, of BDS, of Israel-as-apartheid-state mutterings that simply aren’t true. So you have a party yielding to far-left voices that are in opposition to the safety and security of the Jewish state.

Is support for Israel the single most important factor for Jews to consider in voting?

I can’t say it’s the most important thing. As Americans, your job, your health care, your safety, your kids’ education are critical. But support for Israel should be among those things that are important to you. For many Jews today, that’s not the case. That’s unfortunate, because Israel’s existence is still precarious, and anti-Semitism is a global issue today. The last time I was in Tel Aviv, I walked by a hotel pool and everyone was speaking French, and when I asked why, I was told, “It’s hard to be a Jew in France today.”

I give this president great credit on the United Arab Emirates peace deal—it reflects a lot of work behind the scenes. It’s also a reflection on the Obama administration that slammed the door on Israel on the way out. Among Israelis, not just Americans, Donald Trump has been the best friend Israel has ever had in the White House, and we’ve had some very good friends, Democratic and Republican, going back to Harry Truman.

Too many Jews today think the only issues are social issues. I think it was Norman Podhoretz who said that for a lot of Jews, when Moses came down with the tablets, one said abortion and one said gay rights. But when I was a mayor and senator, I didn’t spend a lot of time on social issues. The central issues should be economic security, personal security, health, education and support for the Jewish state, and on those issues, the Republican Party stands up well.