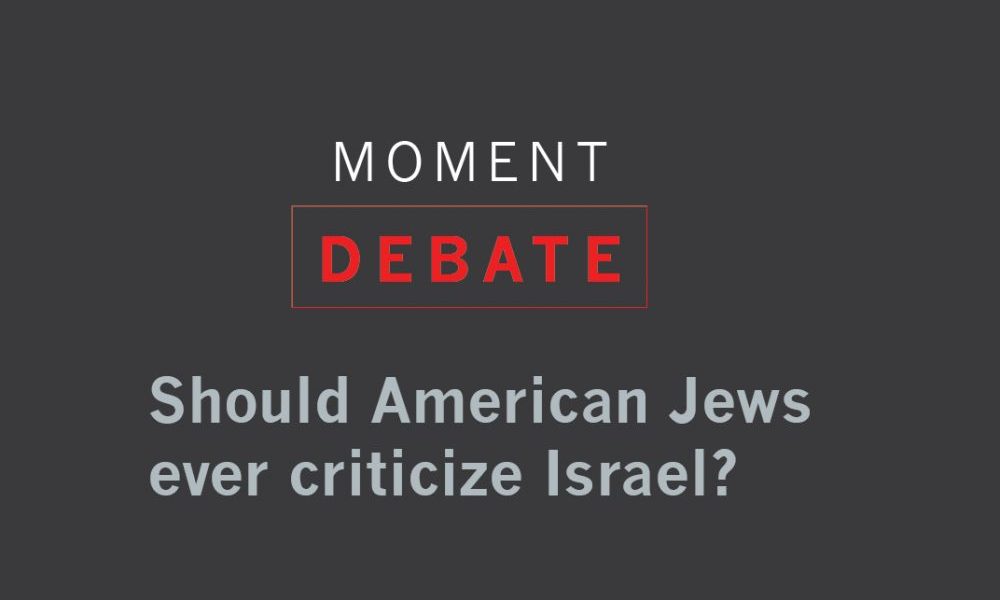 Absolutely. Not only do American Jews have the right to critique the policies of Israel’s government, they have a responsibility to do so, precisely to demonstrate that Israel is not perfect and should be treated like any other country in the world. That in itself goes a long way toward debunking the idea that Israel should be held to a different standard, an idea you find not only on the right but also on the left.

The three-D test—does the criticism demonize Israel, delegitimize it or apply a double standard?—is a good framework for determining whether someone is criticizing what Israel does, which is totally acceptable, or criticizing Israel as an entity. If someone thinks that Israel itself is fundamentally illegitimate, so everything it does is illegitimate, that’s a problem.

Some members of the Trump administration, special representative for negotiations Jason Greenblatt most recently, have taken the view that there’s absolutely nothing the Israeli government does or has done that is worthy of any criticism at all, and I find that a baffling position. It makes for odd optics, particularly if your actual day job is to bring about mediation between Israel and Palestine. I don’t know of any theory of mediation that says you’ll get to agreement by continually bashing one side and saying there is not one single solitary thing to criticize, even mildly, on the other.

Are there times or circumstances where criticism is off-limits?

It’s not so much time as proportionality. For instance, when Israel comes under rocket fire from Gaza and responds with its own fire, then civilian casualties in Gaza, while terrible and to be avoided, should not be critiqued as if Israel were just bombarding Gaza. I don’t accept the idea that critiquing Israeli actions in wartime is off-limits. I’m hard pressed to come up with a circumstance in which all criticism should be withheld because Israel is under fire. That’s an absolutist version of the argument. It’s certainly out there, but I don’t accept it.

Some things have changed. I can understand American Jews not wanting to criticize Israel before 1967, or even in the early 1980s, when its existence was under threat. I don’t think that’s the case anymore. Also, we’re living in a world where communication and news and social media make it easier to follow every little thing that’s taking place in Israel, whether you live there or not. It’s a more target-rich environment for criticism, and it enables people to see Israel as it actually is, as opposed to an idealized version that never existed. That enables a deeper connection, but it also makes it easier to see Israel’s flaws. I personally would much rather have a fuller picture and be able to appreciate the country in its entirety, even if it means seeing some unsavory aspects. To have a mythical country isn’t very satisfying.

Is there a duty to defend Israel when others criticize it?

Nobody thinks to put Chinese-Americans on the spot to answer for the mistreatment of Uighurs in Chinese detention camps. In the same way, I don’t think it’s fair to expect American Jews to answer for or defend everything Israel does. Outsiders shouldn’t impose this obligation, and American Jews shouldn’t accept it. That being said, many American Jews feel a strong affinity and derive a large part of their identity from the existence of Israel as a Jewish state, so they feel an extra obligation to defend Israel, and that’s entirely understandable. Even though people argue that they’re totally different categories, it’s hard to disentangle Israel from Judaism completely.

Should American Jews support bills in Congress that would criminalize support for BDS?

The BDS movement seeks to end Israel as a Jewish state, and that itself is an anti-Semitic goal, so I’m entirely sympathetic to congressional efforts to state that the sense of the U.S. government is to oppose it. I would not support any efforts to make BDS illegal or sanction or punish people who are in favor of it, because we live in the United States and have a First Amendment, and freedom of speech should be inviolable. I was glad to see Rep. Lee Zeldin’s bill pass with a huge majority, because it states opposition to BDS but doesn’t penalize people who support it. The Senate bill goes much further in terms of free speech, and I find it more problematic.

Does the government of Israel represent you?

It doesn’t speak for me. I have no role in electing Israel’s government, and I don’t believe that the prime minister of Israel speaks for Jews all over the world. But if the question is whether I have a stake in Israel and how it’s run, the answer is yes. If Israel wants diaspora Jews to feel like stakeholders in the Zionist project, and I fervently hope Jews all over the world feel that, then Israel’s government has to accept that Jews want to be represented there whether they live there or not. They shouldn’t expect to have a voice in Israeli politics, but it’s fine for Jews around the world to expect Israel to respect their rights as Jews and their connection to the State and the Land of Israel.

Could anything cause you to break all ties with Israel?

It’s hard if not impossible to envision. My feelings toward Israel go well beyond how I feel about any current Israeli government. Israel is a huge part of my Jewish identity, and I have Israeli family and friends, and I spend lots of time there and have cultural and emotional and religious links to the country. It’s hard to see any scenario where I’d cast Israel off and divorce it entirely. But if we’re faced with a situation some years from now where Israel is no longer a democratic state and has become an authoritarian country whose sole purpose is to maintain its Jewishness, I wouldn’t sever all ties, but I would have a hard time supporting it as fervently as I do now.

Michael Koplow is the policy director of the Israel Policy Forum and author of its weekly Koplow Column.