Home / 000 JPVP / Dan Levin / Dan Levin (FL): ‘There Has Been an Erosion of Faith in the Institutions of Government’ 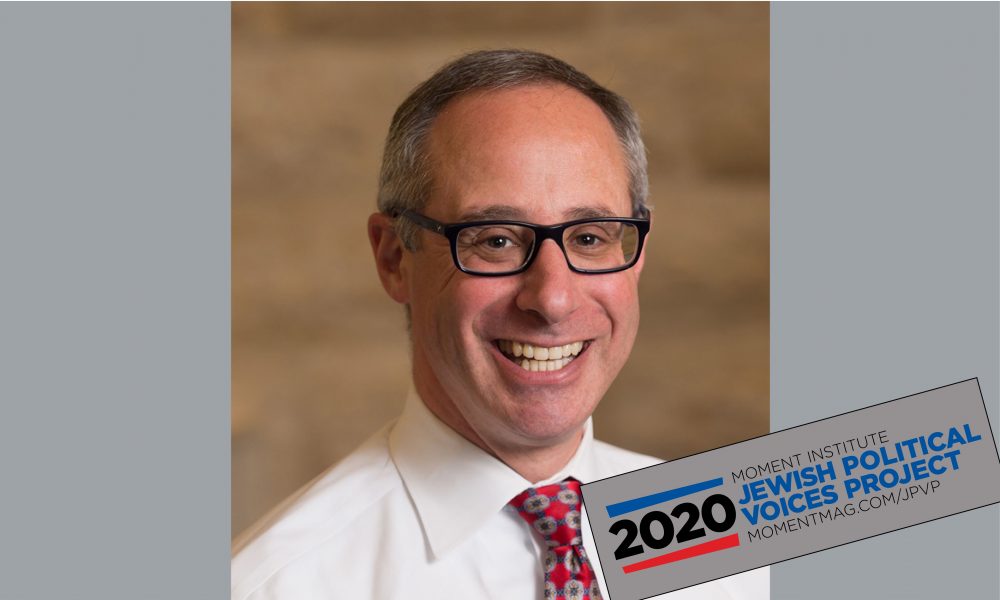 Daniel Levin (50), a Democrat from Boca Raton, FL, is a past president of the southeast region of the Central Conference of American Rabbis and served as a member of the Reform Movement’s Think Tank, a group focused on planning the movement’s future. He has also served on the Board of Directors and the Executive Committee of the Jewish Federation of South Palm Beach County.

In many ways, his presidency is what I feared, and in others, it is even worse. It is overwhelming for me when I think about how the institutions of government whose mission is to serve and protect our people have been eviscerated – the Environmental Protection Agency has obliterated rules to protect the environment and turned away from the necessary and vital work of curbing greenhouse gas emissions; the State Department has lost dozens of experienced diplomats and career, foreign service officers, due to political influence, corruption and overreach; in so many ways the Department of Justice has lost its independence; our intelligence agencies have been manipulated and maligned; and now the CDC, once the most effective and respected public health institution in the world, has been sidelined in the moment we need it most. The list goes on and on—not to mention the extraordinary dishonesty that emerges from the White House on a daily basis.

There have been only two significant legislative accomplishments – a tax cut that overwhelmingly benefited the rich and which resulted in annual budget deficits nearing $1 trillion in a time of prosperity, and a bipartisan criminal justice reform plan.  Everything else he has done has been to the detriment of the country. He has politicized and infused corruption into many departments, installing political appointees with no experience or expertise. He has stocked the Federal bench with 200 judges with lifetime appointments, several who were not even recommended by the American Bar Association. In all likelihood, that will be one of the lasting imprints of his presidency.

Joe Biden has been quieter than I anticipated, but due to the pandemic, he has not been able to be “out there.” I am hopeful that he will find paths to communicate to the electorate his vision and plans for how he hopes to lead. With 90 days until the election, it’s been months since we’ve seen him at the top of the news cycle.

To win in November, he will need to defer attention from his record of failure and spread misinformation and fear about his opponent. He will also need to succeed in repressing turnout and keeping people from the polls.

Joe Biden needs to accomplish several things. First, he needs to speak to moderate democrats who voted for Donald Trump in 2016 and let them know that he plans to restore integrity, honesty and good governance and will not be lured toward hard-left liberal policies.  At the same time, he will need to galvanize those who were excited by the campaigns of people like Bernie Sanders, Elizabeth Warren, and Pete Buttigieg by emphasizing his sensitivity and sincerity in wanting to make a difference in the policies that matter to them: healthcare, education, environmental policy. He needs to express his experience and competency, to give people the faith that all the instruments of government that have broken and failed can be repaired and restored. Lastly, he needs to speak to working-class Americans, to let them see his patriotism, and to see how his policies will help grow our industrial and manufacturing sectors.

Resign as quickly as possible.

Dan Levin In his first 100 days, Biden should focus on creating a national strategy to fight the coronavirus, helping to coordinate with state governments so that there is a seamless approach to public health. He should install new and independent oversight professionals to ensure that good government and corruption are rooted out of government agencies. He should focus on getting America back to work—and work to create a robust infrastructure and manufacturing program to get people back to work and to create the green technologies necessary to reduce the impacts of warming and climate change.

My concern is that the post-office has been deliberately subverted and will have a difficult time handling the volume of ballots to be cast by mail. I am concerned that Donald Trump will cast so much doubt on the fairness of the election that he will refuse to leave office after his defeat, and that his supporters will take up arms against a newly elected administration.

Absolutely not. Many states have created mail-in voting procedures that have succeeded for years. In many states, corrupt partisan efforts to curtail early-voting and closing polling places make in-person voting a much more difficult path to participation than mail-in voting.

I think the disastrous US response to the pandemic will potentially impact the election.  I think if anything, the Black Lives Matter protests will activate people to vote who may not have participated in the past.

The pandemic will likely affect turnout. I think there will be a very significant increase in voting by mail, which hopefully will mitigate the issues of getting out to vote.

To be clear, the closure of voting locations has much more to do with strategic voter suppression and less to do with COVID-19. By reducing early voting options and by closing polling places, especially in urban areas, you create significant obstacles to voting—by requiring longer commutes to polling places, and long lines where voters need to wait hours, sometimes in inclement weather, to cast their ballots.

I prefer to vote in person. I appreciate the ritual of going to the polling place and casting my ballot.

It is fundamentally tragic that our country has handled the outbreak of the pandemic with such an utter failure of leadership and collective citizenship. The State of Florida has slightly less than a quarter of the population of Germany, and on any given day, we record between four and eight times as many new cases.  Germany has 9260 deaths total for a population of nearly 90 million. The State of Florida records nearly the same number of fatalities with a population of fewer than 22 million people. The president and national leaders seem more interested in dividing the country for partisan advantage than bringing the country together to save lives.

The economic devastation is also incredibly difficult. It pains me to think that if only the country had come together and embraced the public health methodologies to stem the spread of the pandemic, we could not only have saved thousands of lives, but we could have created a possibility for the safe reopening of the economy, thus saving businesses and jobs.

I wish we had done what was necessary in the late spring and early summer to stem the spread of the pandemic so that schools could open safely. I fear that sending children back to school will not only endanger our children but also their families. At the same time, I see families struggle with educating their children, especially younger children who need more supervision. I believe we need to do everything within our power to reduce the spread of the virus so that children and educators can safely return to schools.

I am deeply worried about the future of American democracy. I fear there has been an erosion of faith in the institutions of government, and that loss of faith shakes the foundations of our government. I believe the administration has drifted dangerously into authoritarianism, with complicity by members of congress who put party loyalty ahead of the common good. The country’s leaders have sacrificed the long-term safety and prosperity of our country on the altar of short-term partisan gain, political advantage, and greed. The level of animosity and anger, even visceral hatred, between people of different political ideologies is terrifying. People no longer look at others on the opposite side of a political divide as citizens of goodwill who share different philosophies, but as enemies to be hated and vanquished.  I fear that the damage we are inflicting on our country, on our society, and on our world may be irreparable unless we come together as a nation, lay aside our animosities and differences, and decide it is better to preserve the Union than our tribal loyalties.