While Americans are busy deciding which restaurant to eat inside at and planning parties, COVID-19 is raging at its highest levels ever worldwide. Tragedy, in particular, is unfolding day after day in India, which is struggling to vaccinate and care for its people, including its approximately 6,000 Jews. In order to bring much-needed attention to this crisis, Moment is publishing a letter from Nancy Brim about how COVID-19 has affected her Jewish family living in Chennai, in the southern state of Tamil Nadu.

I was so looking forward to finally being able to spend time with our niece Shamira and her husband in their relatively new home in southern California. She had had a baby two months ago, and being the only family on her side in the U.S., I was hoping I could, now that we were all vaccinated, be helpful, at least giving her and her wonderful husband a few date nights while I stayed with the baby.

For ease, we say niece. She grew up in Chennai (formerly Madras) in Tamil Nadu, a state in the southern part of India. Her father, Gershon Joshua, is my husband’s first cousin and they grew up together—like brothers—in Kochi (Cochin) in the state of Kerala, also in southern India. Most of the family had immigrated to Israel and so their families were very close. Gershon married Elizabeth Abraham, who was part of the Zionist Mumbai Jewish community, in 1987. It was a big deal for India’s entire Jewish community at the time. The couple was married in the famous Pardesi synagogue in Kochi and their wedding was the first in the synagogue in 25 years. Everyone in the family has newspaper clippings of the event.

I planned to arrive at our niece’s home on May 4 and stay through Mother’s Day. But on April 30, Shamira texted me that both her parents were sick with COVID-19. This was scary news: India’s COVID cases have been raging out of control—there have been to date 25 million reported cases—and the country, now in lockdown, is struggling to care for those who have become ill. Both Gershon, 64, and Elizabeth, 62, had received their second dose of the Covaxin vaccine (which was developed in India) 10 days prior, and they appeared to have mild cases. Still we were worried. They hadn’t yet made it through the full two-week period required for peak immunity. Elizabeth had underlying conditions. Shamira’s sister, Tanya, who lived with her parents, hadn’t been vaccinated.

I arrived and the next day, May 5, Elizabeth had gone into the hospital as a precaution to be monitored. It hadn’t been easy to get her there because of the lockdown, and they couldn’t go with her. The family felt extremely fortunate, however, that she was in a private hospital. But her oxygen levels were fluctuating, and the doctors there decided to treat her with the broad-spectrum antiviral medication Remdesivir, the drug that made news when former U.S. President Donald Trump took it last year. Remdesivir was very hard to obtain, but Tanya was resourceful; calling friends and contacts, she eventually located some. The lines to get it were up to ten hours long, and since by now Tanya too had tested positive, she couldn’t wait in them herself. She found friends who did despite the lockdown. They were, however, only able to procure five vials and Elizabeth needed six.

Wednesday, Elizabeth was admitted into the ICU because her oxygen levels were plummeting and she needed high-flow oxygen. The next day the news wasn’t good: Her levels weren’t improving. The hospital continued the high-flow oxygen through the night hoping that they would. The family was frustrated because information was hard to get; they didn’t know what was happening. The doctor they were finally able to reach by phone, according to Tanya, sounded concerned.

The next thing they heard was that the hospital wanted to move Elizabeth to another hospital. There was no communication to help them understand why. (The family later learned it was because the private hospital didn’t have enough oxygen.) The problem was finding another bed, as there were none to be had throughout the state and so many were looking for one. Both Tanya and Shamira went on a phone calling campaign to find any connections. My niece called people late at night from California.

Ultimately a bed was found at the government-run Rajiv Gandhi hospital. This appeared to be a wonderful miracle. Then the family had to find an ambulance, which again was tough because of the lockdown. Then the hospital couldn’t release Elizabeth without the signature of a family member. But Gershon and Tanya couldn’t go out, and they were the only local family. Somehow, after a lot of phone calls, the hospital agreed to discharge her. But then the ambulance driver initially wouldn’t take her, since he had been told there were no beds available at that government hospital. Finally, he was convinced and took her there.

Everyone was relieved because, at least from looking online and talking to local contacts, Rajiv Gandhi seemed to have the best protocol in Tamil Nadu for treating COVID and an oxygen plant in-house. Elizabeth was placed in a ward with around 12 patients right across from the nursing station. She was also allowed to have someone with her, so a longtime friend and companion went to the hospital. At least the family had someone to communicate with right there. Unfortunately, this friend was fearful of doctors and the family wasn’t sure that the information was being communicated fully. When Tanya spoke to Elizabeth, she was crying. She wanted to be moved to a private room or hospital. Tanya tried to explain to her that she had been moved to the new hospital to get the best care. 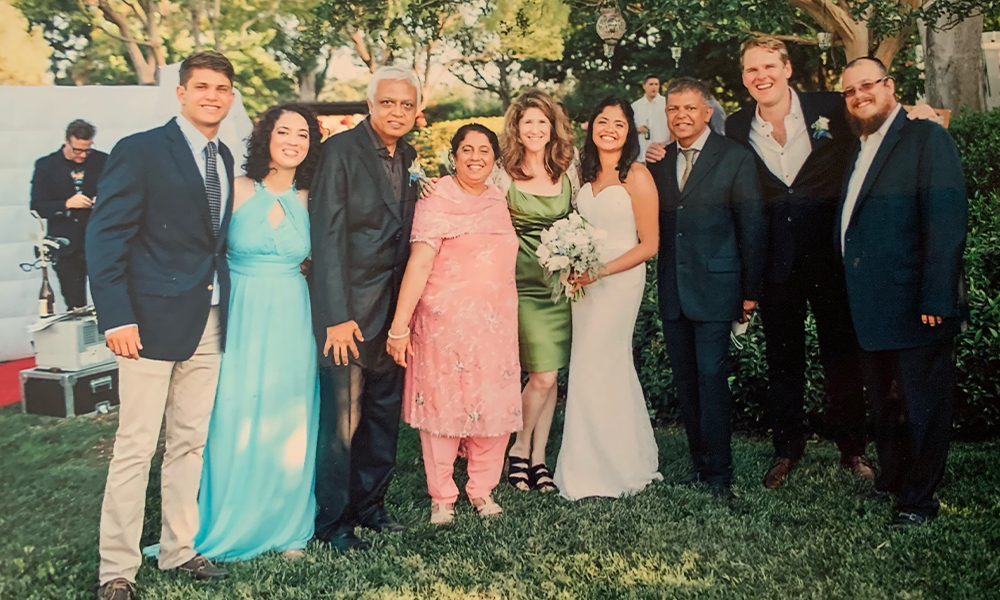 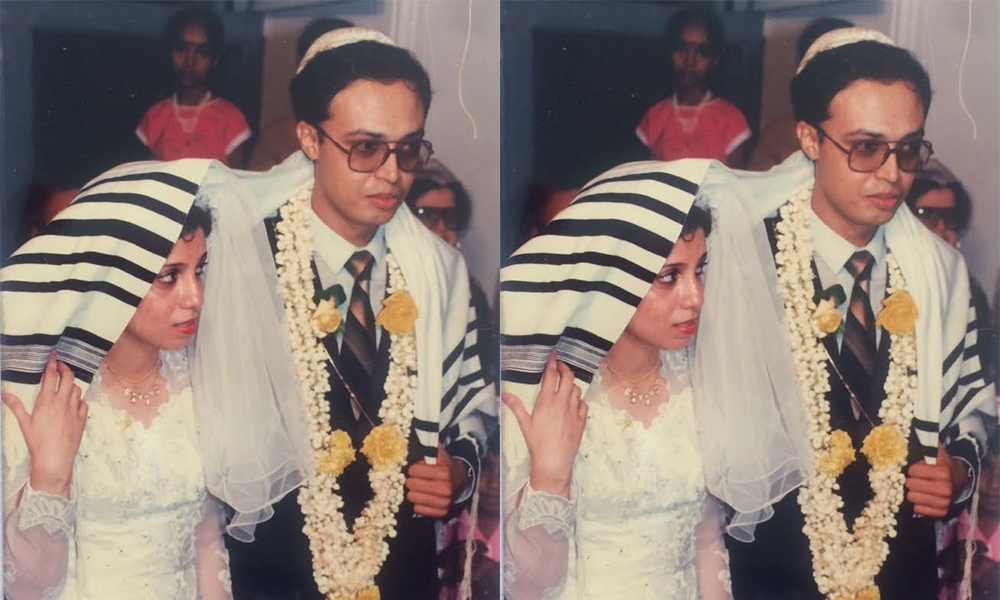 Gershon Joshua and Elizabeth Abraham’s wedding on November 17, 1987. The pair were married at the synagogue in Kochi. Courtesy of Shamira Joshua. 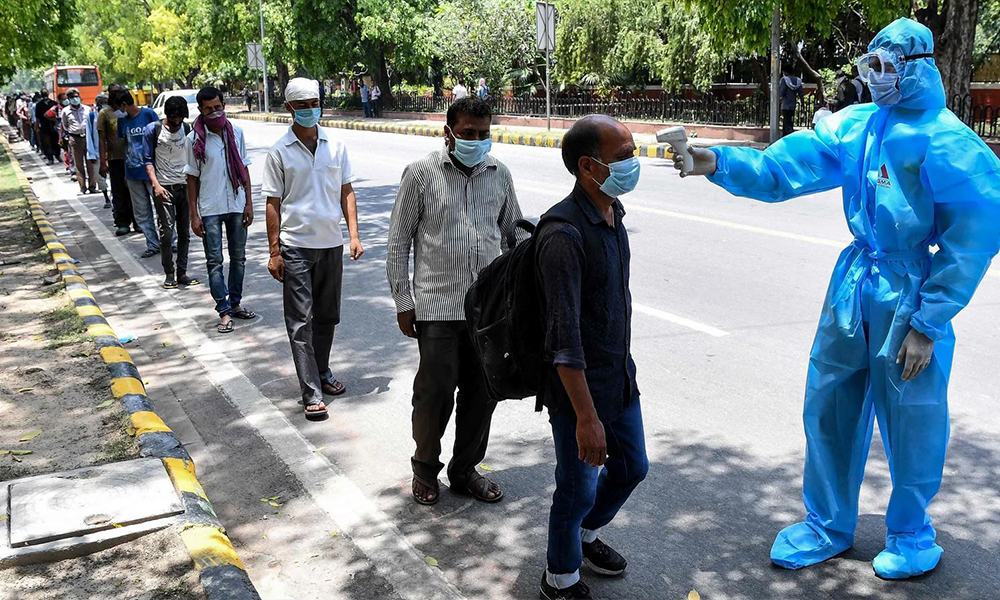 India has experienced a surge of COVID-19 cases and deaths in 2021. Above: Protocol health checks in India during the COVID-19 pandemic, June 2020. Credit: Gwydion M Williams, Flickr.

We heard on Shabbat that her condition was declining. Tanya and Gershon found a driver willing to take them to the hospital, which due to the lockdown was very difficult. They arrived a few minutes after Elizabeth had died.

It was difficult then to get the body released.

Elizabeth’s Judaism was very important to her. And that meant a Jewish burial in a country overwhelmed by death right now and where Hindus, the majority population, are traditionally cremated on funeral pyres.

Elizabeth and Gershon only knew of one other Jewish couple in Chennai, and this couple, who did not have COVID, managed to arrange the burial at the very small Jewish cemetery in Chennai. It was almost impossible to find gravediggers during lockdown, but they persevered. At first Gershon and Tanya were told they couldn’t attend the burial, but they ultimately were allowed to go to the cemetery. But no one else besides the other Jewish couple could attend because of the lockdown.

The friend read the prayers and his wife held a phone for us to watch the burial, although it became dark while the burial was taking place. There was no minyan and no Mourner’s Kaddish. Later, we said the Kaddish for Elizabeth in person at the Chabad Center of Oceanside.

It was impossible to hold shiva so Gershon and Tanya sat in their home alone. —Nancy Brim

END_OF_DOCUMENT_TOKEN_TO_BE_REPLACED

Since the pandemic began, DeSantis has aped Trump’s responses–and non-responses–to the crisis. He has refused to take significant state action to stem the now-record rising tide of COVID-19. This has included intransigent resistance to mandating the use of masks, closing the beaches and ordering a stay-at-home lockdown. Echoing Trump, he deferred to local authorities to take such action.

END_OF_DOCUMENT_TOKEN_TO_BE_REPLACED

By harnessing the energies that produced the so-called “Start-Up Nation”—cross-team multidisciplinary approaches, willing to work intensely and collaboratively, ingenuity, and a good dose of unhumble chutzpah—Israel has been able to achieve important breakthroughs.

END_OF_DOCUMENT_TOKEN_TO_BE_REPLACED

One thought on “Tragedy in Chennai”