Nearly a quarter million Jews once called Morocco home, making it the largest Jewish community in the Arab world. On a recent bright afternoon in Marrakesh, I was contemplating this stunning fact as I walked the warrens of the city’s ancient mellah (ghetto), where 50,000 Jews once lived and davened. My destination, 36 Talmud Torah Street, was the Lazama synagogue, one of two active temples out of the 42 that for centuries were the heartbeat of Marrakesh’s Jewish community. Lazama’s bright central courtyard, walled with Moroccan blue and white Star of David tiles and open to the sky, seemed to welcome HaShem along with swallows chattering in the orange trees. 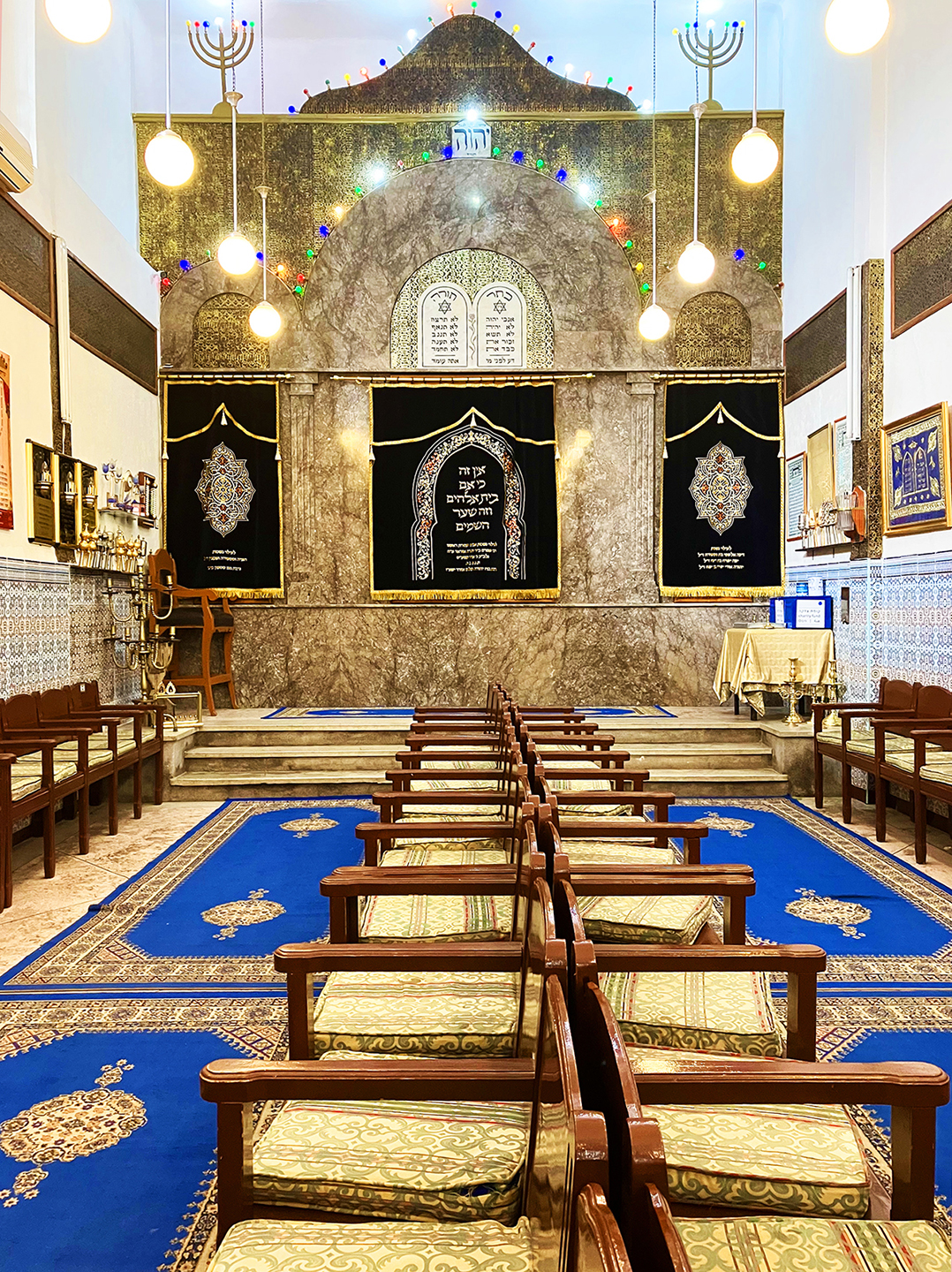 The interior of the Lazama synagogue in Marrakesh.

I crossed the courtyard to the sanctuary. Unlike in Ashkenazi shuls, long rows of seats face each other in traditional Moroccan style, allowing sons to face their fathers in prayer and separating the pulpit from the bimah. This was one of hundreds of synagogues, Jewish schools, cemeteries and mellahs that have been restored under King Mohammed VI’s $20 million budget initiative. The refurbished sanctuary appears contemporary, though it was first founded in 1492 by Iberian Jews fleeing the Inquisition. This is where the city’s 150 remaining Jews come to pray.

As in my  prior visits to Lazama, I was mesmerized by the back rooms, a treasure trove of Moroccan Jewish history. They are bursting with faded photos in ill-fitting frames, their plaster walls barely visible beyond the patchwork of images. Taken in the 1930s as an archival project, the pictures document the lives of Berber Jews from the Atlas Mountains, whose history developed over two millennia. Many of the young Berber Jewish men pictured on these walls trekked from distant villages to this synagogue to study the Torah.

I wondered, who were these people? They’re not dressed like any Jews I’ve seen: women in turbans and embroidered tunics, laden with masses of silver jewelry—heavy earrings, necklaces and bracelets—and some with tattooed faces. The men—heavily robed, bearded, many with payos—stare intently at the camera.

One of a band of intrepid Jewish journalists venturing south from Marrakesh across the High Atlas Mountains and the endless switchbacks of the Tizi N’Tichka Pass, on this trip I encountered a culture that had traveled via camel caravans from the heart of Timbuktu in Mali. These caravans, some a thousand camels strong, crossed the Sahara laden with goods (salt, silver, gold, gemstones, spices, cotton). They traded at busy desert marketplaces in the south and traveled north to Marrakesh. You can still sense Moroccan Jewish life along these caravan routes and remote mountain villages. You can find crumbling mellahs tucked away in corners of desert kasbahs, old synagogues turned antique shops, and shrines of legendary rabbis that have become pilgrimage sites. 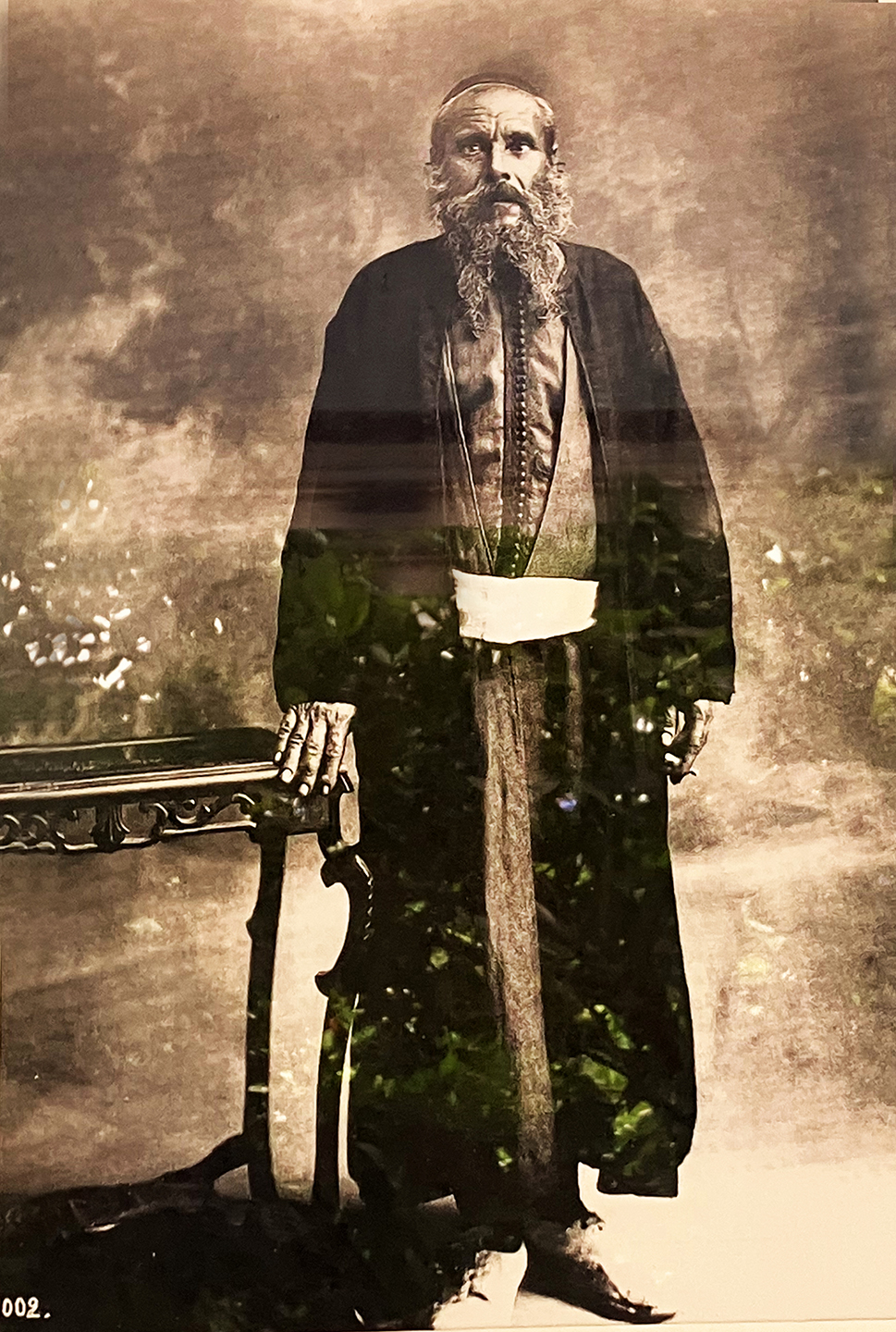 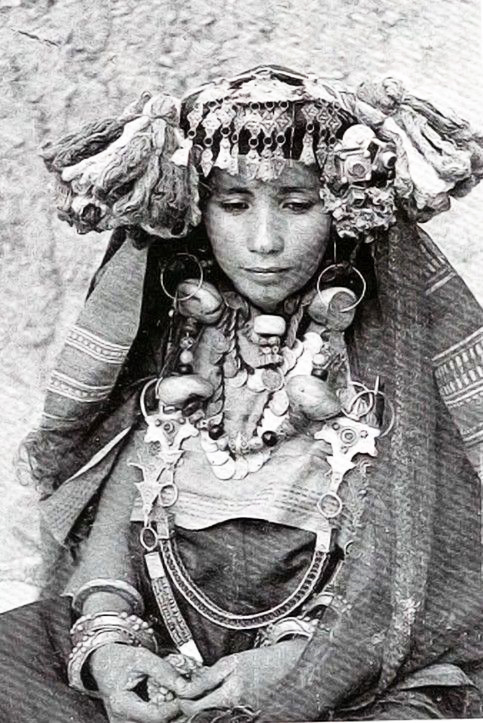 No one knows more about Morocco’s Jewish past than the author of Jews under Moroccan Skies, Raphael (Raphy) David Elmaleh. He told me that following the destruction of the Second Temple by the Romans in 70 AD, some 30,000 Jews fled to North Africa’s Maghreb (Morocco, Algeria and Tunisia), at the time inhabited by Berber tribes. It is believed that the migrant Jews, the toshavim, founded Jewish settlements in the Atlas Mountains, living alongside Berber neighbors.

The Berbers, also known as Amazigh, were animists. Many were drawn to the Jewish way of life and many believed that living around Jews was a baraka, or divine blessing. “The Berbers saw how Jews prayed, and how they slaughtered cattle, and they connected with Judaism,” explains Elmaleh. Many Berbers converted to Judaism and became known as “Atlas Jews.” Still others intermarried with the toshavim. A hundred years ago, there were 175,000 Berber Jews living in the region ranging from the Atlas Mountains south to the Sahara.

The legacy of Berber Jews is still detectable in the markets. The style of silver jewelry I saw in the black-and-white photos is still sold in the markets today, and every aging merchant knows a Jewish family who left. One of our guides, Hamid Bou-Layoun, lit up when I asked him. “Of course I knew Jews!” he quickly responded, shielding his eyes and adjusting his indigo dara’a to cover his head from Ouarzazate’s scorching desert sun. “They were my friends and neighbors. I played with Jewish boys and ate at their homes. And then one day, we woke up and the families were gone.”

But, I discover, though the Berber Jews are gone, remnants of their lives live on. 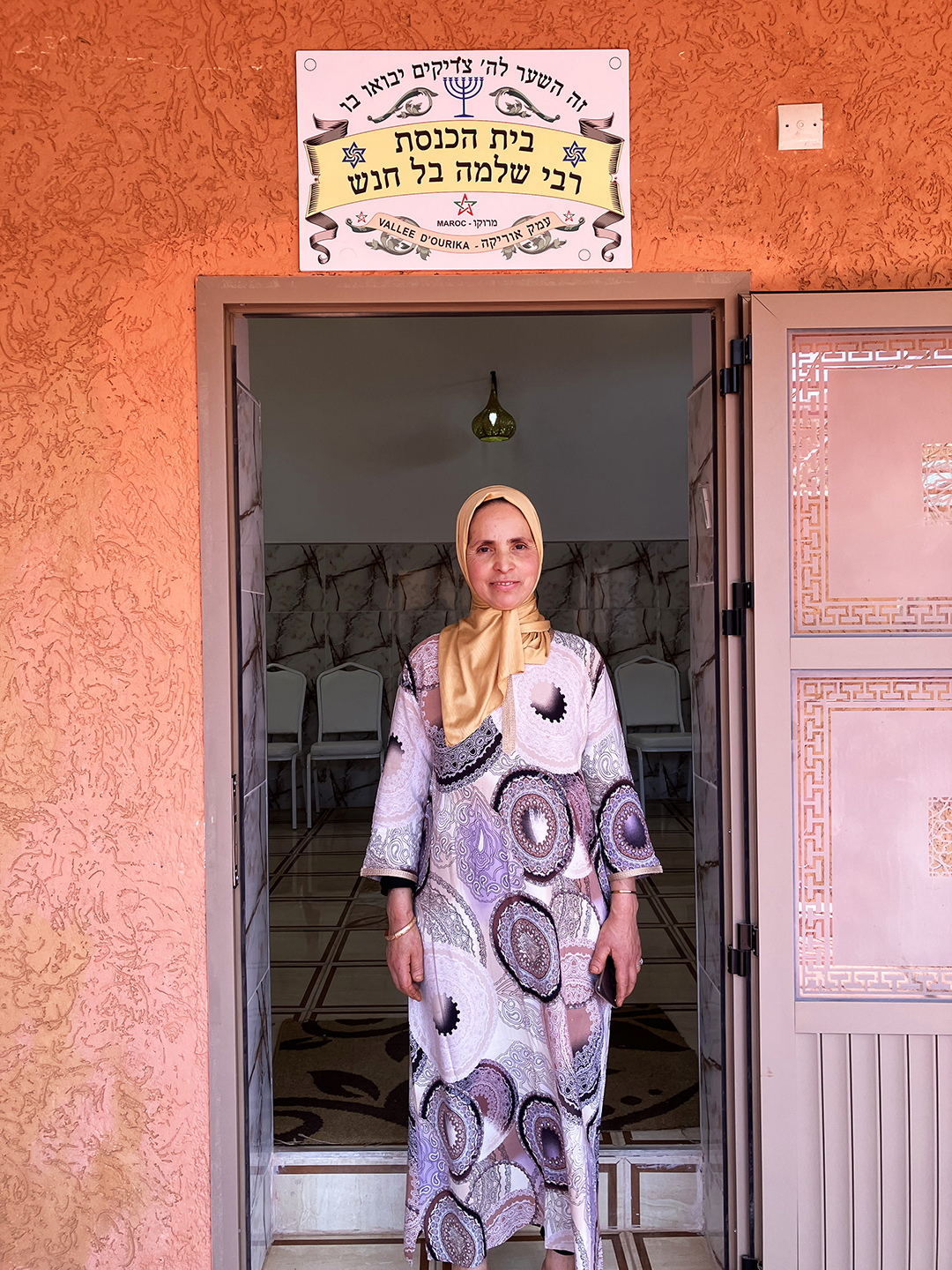 Fatima, a local Muslim woman, takes care of the tomb.

Picture a narrow mountain road in the fertile Ourika Valley, some 40 miles south of Marrakesh. Famed for its fruit trees and for the mint that fills Moroccan tea glasses, this village was once a thriving Jewish community with 300 families, and multiple synagogues and yeshivas.

It is also home to the tomb of Rabbi Solomon Bel-Hench. A 15th-century tzaddik and doctor from Israel, he traversed North Africa on a mule, fundraising for his yeshiva. He died in this valley and is now called the “Saint of Ourika,” revered by both Jews and Muslims for his legendary healing miracles. Today his tomb is the site of annual pilgrimages, or hiloulas, drawing followers from around the world.

One of the last remaining Berber Jews of the valley, Hananiyah Alfassi, guarded the Ben-Hench tomb for more than 30 years until his death in 2016. Now Fatima, a local Muslim woman who welcomes tourists with a friendly “Shalom!” cares for this Jewish holy site and helps prepare kosher meals.

By the 11th century, Berber Jews had established a 3,500-strong settlement and trading post in Ouarzazate, the “Gateway to the Sahara.” Jews were savvy merchants at this busy stop on the old caravan route, buying salt, silver and spices from the caravan traders—some of whom were Jews from Timbuktu—and selling dates, camel and mule hides for saddles.

My journalist group was ushered through the main gate of Ouarzazate’s medina, into what resembled a giant sandcastle, the Taourirt Kasbah. Nearby, down alleys of dried red earthen walls, is the heart of the mellah, where about 170 Jews lived until the 1960s exodus. We were headed for the reputed site of a former synagogue. But author Raphy Elmaleh insists it is no such thing. “It was made for tourists!” he shouted indignantly on our Whatsapp call. “The real synagogue was around the corner, now a shop that makes blankets and carpets.” Whether it was an actual synagogue or a recreated tourist attraction, its warren of cluttered rooms was a bounty of objects found in a Jewish Berber home. Back rooms showcased ancient housewares, clothes, handwoven Berber carpets, with a small retail section of Judaica. Up a very narrow staircase, sun shone through Magen Davids in the circular windows on our way to a classroom said to be a yeshiva.

As we approached the nearby village of Bizou, a huge white-walled compound appeared in the distance, rising from the flat green landscape. This is the destination of thousands of global visitors who convene on the eighth day of Hanukkah to celebrate the life—and yartzheit—of Rabbi David Ben Baroukh Cohen Azogh. The tzaddik, descended from a long line of Jewish saints, is said to have performed miracles not only in life but even after his death.

I entered the compound through heavy wooden doors, startled by an enormous menorah that dominates a huge paved plaza. I could almost see thousands of pilgrims singing, dancing and praying in this vast open space, waiting for the shekinah, the presence of God, to return to the rabbi’s grave. Beyond the plaza is a sea of whitewashed graves surrounding the tzaddik’s tomb in a white marble pavilion. According to Raphy Elmaleh, 322 tzaddikim are buried in Morocco, but only 75 have marked graves. This is one of the most remarkable.

Ksar Ait Ben Haddou is Morocco’s most famous kasbah and a UNESCO World Heritage Site (UNESCO itself is led by Audrey Azoulay, who is of Berber Jewish descent). It is believed that this fascinating old ksar (Berber palace) dates from the 11th century and held an important position along the trans-Saharan trade route. According to Raphy Elmaleh, Jews took full advantage of this busy trading center and settled here. This impressive fortification was the location for the filming of Lawrence of Arabia and Gladiator. 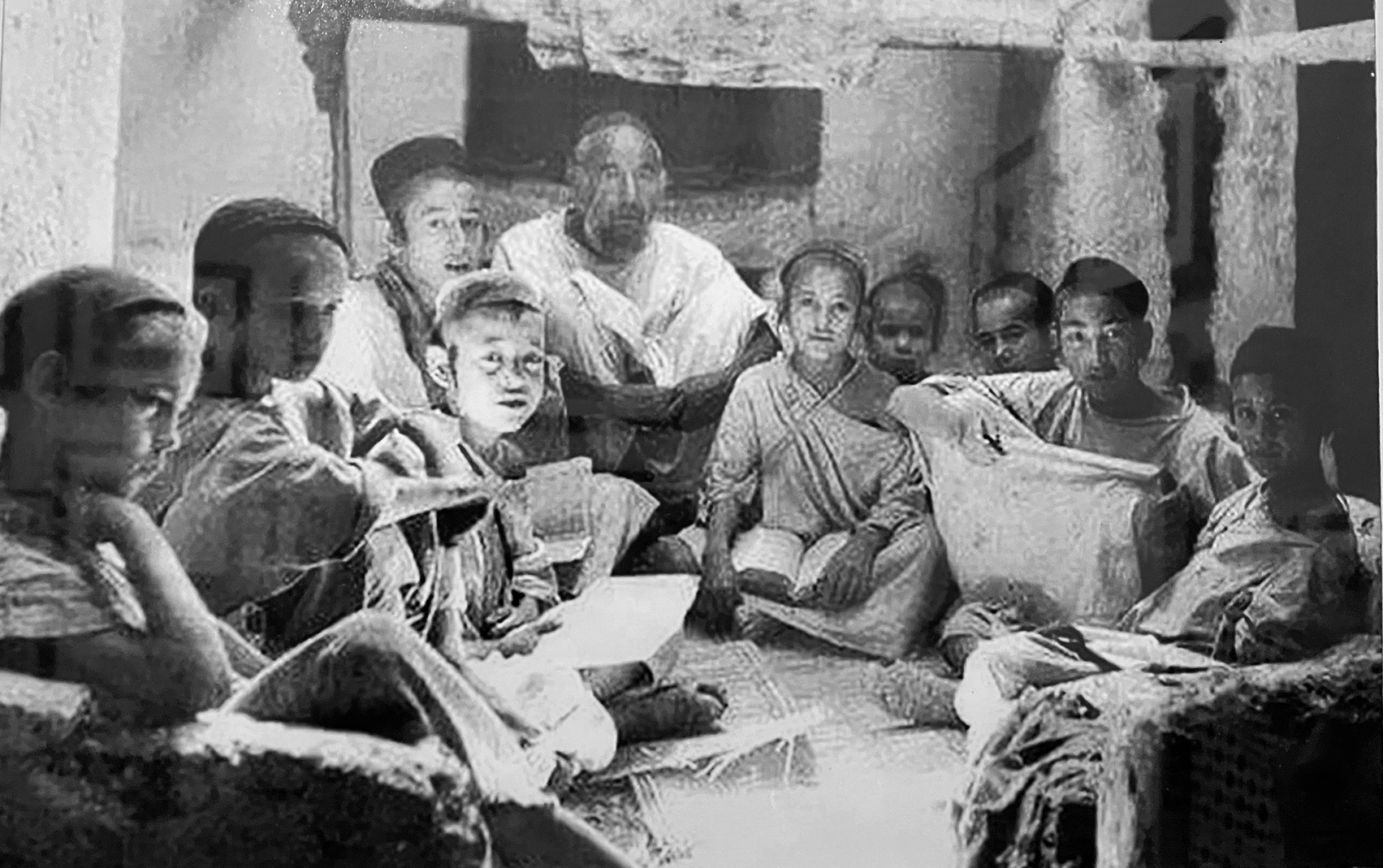 The photographs that caught my eye in the Lazama synagogue immortalize a world that has now disappeared. For centuries Berber Jews were silver and goldsmiths, saddle makers, rug merchants, farmers. They were builders of kasbahs, architects and engineers. But it was in trade that Berber Jews built a lasting reputation. An old Moroccan proverb, from the time when markets were the culture’s lifeline, goes, “A market without Jews is like bread without salt.” This is the legacy of Berber Jews, respected for their resilience and enterprising skills, who played such a vital role in the social and economic structure in the mountain villages and desert mellahs they called home.

Top image: The village of Bizou has a Jewish cemetary where tzaddikim are buried, and an enormous eight armed menorah that pilgrims dance around during the eighth day of Hanukkah to mark the yartzheit of Rabbi David Ben Baroukh Cohen Azogh.