Book Review | When the Ivory Tower Closed Its Gates 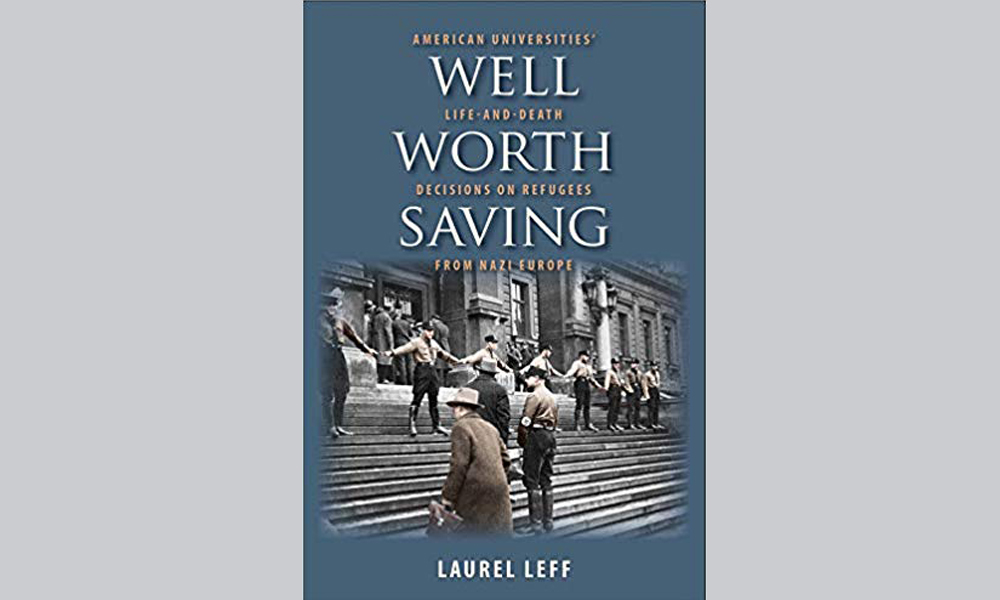 Book Review | When the Ivory Tower Closed Its Gates

Imagine a U.S. law that kept thousands of European Jews and others from obtaining visas to the United States in the 1930s, leaving many of them to deportation and death.

Imagine the U.S. Supreme Court in 2020 throwing its weight behind that exact same law, with consequences yet to be seen. Actually, you don’t have to imagine. On January 27, the Supreme Court, by a 5-4 vote along predictable lines, upheld that same “public charge” clause, inherited from the 1882 Immigration Act, that targets would-be immigrants unable to prove they won’t claim public benefits. The Court’s order, which lifted a preliminary injunction, allowed the Trump administration’s new and stringent interpretation of the clause to go widely into effect.

The grim history of this clause and its parallel roles then and now is just one of many troubling details in Laurel Leff’s new, probing account of how American academe, with a powerful assist from the State Department, closed the door on thousands of desperate Jews and others seeking escape from the Nazis in the 1930s and 1940s. It’s at times like these that we need scholars such as this hard-digging former reporter for The Miami Herald and The Wall Street Journal.

In 2005, Leff, currently associate professor of journalism at Northeastern University and associate director of its Jewish studies program, published Buried by the Times: The Holocaust and America’s Most Important Newspaper. Pulling no punches, and backed by prodigious research, she exposed and explained how America’s greatest newspaper downplayed the Holocaust, in part because publisher Arthur Hays Sulzberger rejected Jews as a race or people, saw Judaism as a religion rather than a nationality—yet still feared that The Times might appear to be “a Jewish paper.”

The Times published 1,186 stories, by Leff’s count, about the Jews of Europe from 1939 to 1945. Twenty-six made it to the front page. Only six of those named Jews as the main victims of the Nazis. “No American newspaper was better positioned to highlight the Holocaust than the Times,” Leff wrote in that book, “and no American newspaper so influenced public discourse by its failure to do so.”

Now, 15 years later, she brings her powerful investigative tools to bear on the many uncaring deans, provosts and presidents who turned a deaf ear to the pleas of European academics desperate to flee to the U.S. As in Buried by the Times, she provides rich context, giving credit where credit is due but blistering those whom history should hold accountable. She was driven to write the book, she explains, out of irritation that “the overriding myth of a welcoming American academy remains largely intact.”

One core reason for that myth’s persistence is the attention given to such world-famous immigrant-survivors as Hannah Arendt and Albert Einstein. There has also been prominent coverage of bright spots such as the push to find berths for Jewish scholars at historically black colleges and universities.

To undermine the misconception that these efforts were typical, Leff writes that she seeks to depict “American universities that never fully acknowledged the crisis befalling the global community of scholars nor rose to the challenges the Nazi era presented to intellectual life.” And she shines light on those who didn’t make it past American gatekeepers.

At the outset, Leff describes the stark choice facing American universities: “Should they hire scholars trying to escape Nazi-dominated Europe and thus restore their careers and ease their path to immigrating to the United States? Or should universities during a decade of economic depression allow budget and other concerns to lead them to reject the thousands of applicants banging on their doors?” From 1933 to the end of World War II, she writes, “desperate scholars besieged American universities. They had been fired from university posts for being Jewish or politically suspect or had been forced to flee when Germany overran their newfound havens. Some Americans helped in their quest—individual professors acting out of friendship, a sense of morality, or professional pride; and academic organizations seeking to preserve science, scholarship and universal principles. Others stood in the way: faculties who feared competition from foreigners and Jews; administrators who worried about budgets, bureaucracy and negative publicity; and State Department officials who sought to limit immigration, including of people with distinguished academic pedigrees. Ultimately, universities decided which scholars were ‘worth saving,’ in the unfortunate phrase of the time, and the State Department decided whether they were to be saved.”

According to Leff, the key provision for professors was Section 4(d) of the Immigration Act of 1924, which allowed for visas beyond the “quota visas” that governed ordinary immigration. From Germany, for example, 25,957 people were allowed to emigrate annually in the 1930s out of hundreds of thousands seeking to leave.

Remarkably, the law placed no quantitative limit on “non-quota” visas. But strict criteria were applied. The applicant needed to have served continuously as a professor, or worked as a practicing minister, in the immediate two years preceding the application. Moreover, professor applicants needed to prove they had a concrete job offer from an American university.

Leff’s numbers reflect the statistical tragedy behind the many personal stories she recounts. From 1933 to 1941, when emigration from Europe largely ended, only 944 professors (and 451 wives and 348 children) received non-quota visas. The Emergency Committee in Aid of Displaced Foreign Scholars, which Leff describes as “the primary committee in the United States that helped rescue European scholars,” received “more than 6,000 appeals and ended up placing just 335 scholars.” Even Alfred Cohn, who launched the Emergency Committee, observed, “We cannot aid everybody, only the most prominent and gifted—the more’s the pity.” Commenting on the criteria employed to sift out those to be saved, Leff acerbically notes, “They could not be too old or too young, too right or too left, or, most important, too Jewish.”

Leff acknowledges that “[s]ome American professors devoted extraordinary amounts of time and effort to the refugee cause as well as to individual refugees.” But the most powerful parts of her fast-moving narrative are the portraits of those who blocked refugees, with their many evasions, rationalizations and cowardly justifications. A few pages into the book, for instance, we meet Daniel O’Brien of the Rockefeller Foundation, an academic patron at the time, who wrote in 1933, regarding the many Jewish doctors in Germany, that “the Jews probably unwisely monopolized the situations and consequently, there is some justification of the attitude of the Nazi party.”

Fifteen years ago, Buried by the Times broke important new ground—building on the work of Deborah Lipstadt and others—by holding The Times and the journalism profession (including journalism departments) accountable for a degree of callousness previously most associated with the State Department and the Roosevelt Administration. Similarly, this time Leff’s work builds on earlier work that unveiled the disgraceful behavior of many American academics as the Nazis expanded their power.

Perhaps the foremost study in that regard is Stephen H. Norwood’s The Third Reich in the Ivory Tower: Complicity and Conflict on American Campuses. Like Leff, Norwood, coeditor of the Encyclopedia of American Jewish History, detailed endless shabby acts by academic powers-that-were. He described Columbia President Nicholas Murray Butler inviting the Nazi ambassador to campus; Harvard celebrating the Boston visit of the Nazi warship Karlsruhe; Harvard President James Bryant Conant dispatching a representative to celebrate the Nazified University of Heidelberg after it had already hosted a book-burning; University of Delaware President Walter Hullihen lamenting the infamous Nazi “Night of the Long Knives” because it “had thrown the Junior Year in Munich program into temporary disarray.”

Well Worth Saving arrives at a propitious time—an often tragic one for would-be immigrants, including academic ones, as the Trump administration finds ever more ways, such as stiffening the “public charge” clause, to shut our doors. Leff tells the story of Helen Nathan, director of a large Berlin library until she was ousted in 1933. The U.S. Consul in Berlin rejected her application for a “quota visa” because her affidavit of financial support came “from a friend, not a relative.” It therefore needed to be at least $1,000, which she couldn’t obtain. The State Department subsequently denied her a “non-quota” visa because it assessed her wholly as a librarian, despite her affiliation with two college-level institutions. Shortly afterward, Nathan committed suicide. Leff reports that the Berlin city library Nathan once directed now bears her name.

As if to inadvertently bolster the contemporary relevance of Leff’s J’accuse, Wesleyan University President Michael Roth, reviewing Well Worth Saving in The Washington Post, recently wrote that when the group “Scholars at Risk” came to him a few years ago seeking help, he managed to “welcome a refugee Syri

an professor to Wesleyan”—a single desperate Syrian professor. “But as a university, could we have done more?” Roth asked.