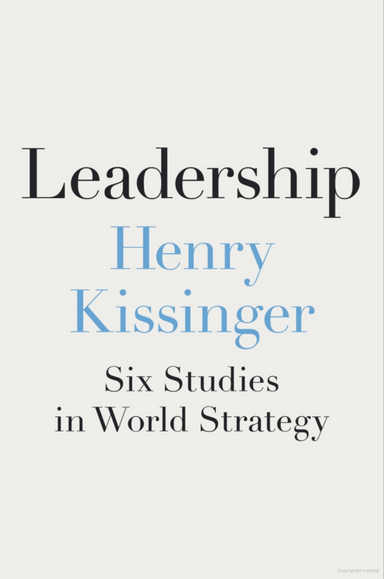 Henry Kissinger, now 99 years old, has added to his prodigious scholarship a valuable and enjoyable book on the qualities of great leadership. The topic allows him to demonstrate his extraordinary depth of knowledge and to communicate his devotion to history, both as a teaching tool and, of course, as something in which he was often personally involved.

Kissinger begins by explaining that, while “leadership” in all areas of life is indispensable, leaders of nations face particular challenges. They must educate, inspire, strategize and then implement “wise decisions” requiring a “composite of political, economic, geographical, technological, and psychological insights, all informed by an instinct for history.” These general traits of leadership understandably rely on intangibles, he says: instinct, inspiration and an “artist’s” sense of the future. Theories of government can’t fully account for these intangibles, which is why Kissinger relies on history as his primary teaching vehicle.

Transformational leaders, he writes, “can be categorized into two ideal types: the statesman and the prophet.” Though both qualities are necessary, each carries risks. As to whether the individual “matters” in history, he concludes that a “contemporary of Caesar or Mohammed, Luther or Gandhi, Churchill or FDR, would hardly think of posing such a question.”

The book consists largely of “studies” (as Kissinger labels them) of six 20th-century figures: Konrad Adenauer, Charles de Gaulle, Richard Nixon, Anwar Sadat, Lee Kuan Yew and Margaret Thatcher. Each study includes Kissinger’s personal contacts with the leader in question, which provide invaluable color. Each leader is said to represent a “strategy” based on the leader’s record.

Adenauer’s strategy, Kissinger says, was “humility.” Adenauer advocated that Germany move cautiously toward restoring its sovereignty and reunification after World War II by actively helping to develop and participate in European institutions. That strategy was “humble,” Kissinger writes, compared to other impulsive, populist options. But Adenauer can hardly be seen as “humble” in what he sought. He wanted nothing less for Germany than a return to nationhood, respectability and responsibility. As Kissinger illustrates, Adenauer was a proud, calculating, principled and fearless person. If humility extends to getting what one wants by going as far as one could reasonably hope to go, Adenauer qualifies.

De Gaulle’s strategy was that of “will,” a quality shared by every consequential leader, but especially applicable in his case. With no semblance of conventional legitimacy, and neither the forces nor the means to gain power, de Gaulle took up the effort to return France to what he called its glory. He was, as Kissinger describes him, an “illusionist” who “conjured up visions that transcended objective reality, in the process persuading his audiences to treat them as fact.” Later, he demonstrated not just “will” but also the craftiness and patience of the statesman. However much he wanted to retain control of Algeria, he abandoned the effort when he concluded it was impracticable. He was instrumental in creating a powerful French presidency; yet he had the self-discipline to step away from power when his leadership was no longer sought.

Nixon, as described in a study rich in personal details, represents the strategy of “equilibrium.” Kissinger credits Nixon with seeking a “multipolar” world in which great powers achieve peace through balance rather than superiority. Kissinger fails adequately to convey, however, the damage inflicted by Nixon on his own initiatives and reputation. He treats Watergate as a “tragedy” rather than the product of Nixon’s deeply flawed character.

Nixon did achieve the opening of relations with China as well as some notable arms control agreements. But several of his initiatives were failures: Vietnam was a costly mistake, despite some temporary negotiating successes; the administration misjudged Sadat’s needs in 1973, and war followed; Nixon’s effort to secure “autonomy” for Bangladesh was dismissed by India’s prime minister Indira Gandhi; and Nixon’s arms control agreements were undermined by the effect of Watergate. Moreover, the “One China” policy and the emphasis on shows of force were Eisenhower policies, and Ike got the United States out of Korea with a favorable and lasting deal. Kissinger could have honored a more deserving leader than Nixon.

Sadat, of Egypt, is said by Kissinger to represent the strategy of “transcendence,” in that he transcended the pattern of Arab and Muslim ideology by making peace with Israel. This section details Sadat’s rise to power from humble beginnings, his nationalist ideology, his steely will and his daring initiatives. He planned and implemented a diplomatic and military agenda that led to Israel’s withdrawal from the Sinai Peninsula, a valuable alliance between Egypt and the United States and a new reality in the Middle East through the Camp David Accords.

Kissinger contends that Sadat, in launching the 1973 attack on Israel before the peace initiative, intended “to transform the situation psychologically in order to make a sustainable peace.” That may have been among Sadat’s anticipated outcomes, but the evidence lends little support to the notion that Sadat did not intend to win militarily in 1973. Kissinger recounts that Sadat greeted him in Cairo, after Israel had stopped Egypt’s attack, with what Sadat described as “the Kissinger Plan”—and yet it was Sadat who initiated the intense mediation that led to a transformative peace. Sadat transcended not only the Muslim world, but Kissinger’s vision as well.

Lee Kuan Yew, Singapore’s prime minister from 1959 to 1990, represents the strategy of “excellence.” Lee relied on the “best” solution to every problem, Kissinger writes, transforming Singapore from an ethnically segregated, corrupt and inconsequential tiny port into an integrated, ordered, rich and important nation.

Lee advertised the city-state as representing the best in the services it sought to provide, insisting that his ethnically diverse citizens work together for the common good.  He supplied his people with a high level of social support and faced down threats posed by Malaya and Indonesia. He ingeniously avoided conflict over which of the four languages in use would be the “national” language by designating all four, thereby enabling English to emerge as dominant based on choice. Kissinger recounts how Lee continued to demonstrate leadership after resigning as premier. He wrote and spoke publicly about his approach to governing and about international affairs, especially the importance of the U.S.-China relationship. He predicted the tension that followed China’s rise.

Thatcher is credited with the strategy of “conviction.” From modest beginnings, she rose through sheer talent, determination and charm to become one of Britain’s greatest leaders. Britain’s educational system gave her the opportunity to demonstrate her brilliance and rhetorical talent. She crashed the ranks of the Conservative Party, became a Member of Parliament, served in cabinet positions and successfully challenged Edward Heath for the party’s leadership in 1974, becoming prime minister in 1979.

Kissinger admits that he told Nixon in 1975 that he did not think Thatcher would last. But he came to admire her and recounts her disdain of “consensus” policies. Britain’s economic disaster helped Thatcher get elected but presented an enormous challenge. She implemented free-market policies, defeating strikes, privatizing industries, cutting taxes, and enhancing trade and competition, while at the same time increasing spending on health. She faced other challenges with strength and creativity, but in Kissinger’s view, her greatest achievements were saving Britain’s economy and restoring Britain’s “special relationship” with the United States. She joined Ronald Reagan in resisting Soviet aggression while supporting his desire to engage Mikhail Gorbachev. She supported George H.W. Bush’s decision to remove Saddam Hussein from Kuwait. And she led the fight against terrorism. Her determination served her well until her resistance to Britain’s European involvements lost her support within her own party.

Kissinger’s conclusions are disappointing compared to his Studies. He writes that the leaders he profiled represented a shift in leadership from “aristocracy to meritocracy.” He goes on, moreover, to contend that “meritocracy” is “faltering,” because the conditions that helped create the six leaders “face their own evolutionary decay”: Factors in that decay include factionalism, a lack of “standards and restraints,” weak and indulgent character and the substitution of “visual culture” for “deep literacy,” due in part to the abandonment of “humanistic education.”

Kissinger is right that most leaders today are deficient compared to those of his Studies. But so were most leaders during the profiled leaders’ own times, or for that matter at any time. Nor does he satisfyingly establish that the middle-class origins of the leaders he profiles had any bearing on their relative success. Leaders over the last hundred years with non-aristocratic origins appear to have produced their share or more of the leaders responsible for the greatest evil (e.g., Hitler, Stalin and Mussolini).

Also dubious is the claim that “humanistic” education is a prerequisite of great leadership. It is doubtful that any among the six profiled leaders was well tutored in the humanities; more likely, lesser leaders with aristocratic backgrounds studied the humanities. Anyway, what proof is there either that humanist studies make for better leaders or that technology undermines students’ capacity for great leadership?

These concluding issues in no way of course diminish the value of Kissinger’s histories. He has described some of the greatest personalities of modern times, often with intimate knowledge and always with penetrating observations. His “studies” make the book essential—and pleasurable—reading for anyone interested in the role of leadership in modern history.

Abraham D. Sofaer is a senior foreign policy fellow at the Hoover Institution. He served as a legal adviser to the State Department from 1985 to 1990.

Henry Kissinger laid the groundwork for American diplomacy in the Middle East almost 50 years ago through his efforts to end the Yom Kippur War and his “shuttle diplomacy” with Israel, Egypt and Syria.

In his new book, Master of the Game, Martin Indyk, former U.S. ambassador to Israel and special envoy for Israeli-Palestinian negotiations under President Obama, takes an in-depth look at how American diplomacy operates behind closed doors and how Kissinger’s design for Middle East peacemaking remains key to brokering peace in the region. Indyk is in conversation with former CBS News correspondent and Moment contributor Dan Raviv, coauthor of Friends in Deed: Inside the U.S.-Israel Alliance.

END_OF_DOCUMENT_TOKEN_TO_BE_REPLACED

Facebook Twitter Pinterest linkedin Telegram
What with non-stop hoopla at the convening of the United Nations General Assembly this week in New York, we offer a quick recap of the ...

END_OF_DOCUMENT_TOKEN_TO_BE_REPLACED

Facebook Twitter Pinterest linkedin Telegram
By InTheMoment contributor Larry Kessner. Maybe in the Czech Republic, poets can become president, but not here. Maybe in France the...