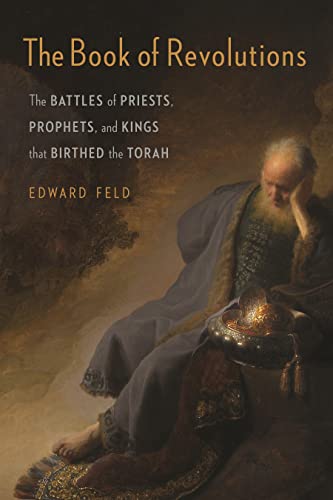 The Book of Revolutions: The Battles of Priests, Prophets and Kings that Birthed the Bible

For many generations, Jews and Christians read the Five Books of Moses as given by God to Moses at Sinai. But now, with the aid of archaeology and of modern academic studies, Edward Feld is able to tell a very different story. Particularly since the 19th century, the modern scholars have argued that the literary parts of the Pentateuch are composed of different stories that come from different sources. They view the text’s contradictions as evidence that different texts from different authors who lived in different times were pasted together—sometimes well, and sometimes not so well.

Feld, a rabbi and biblical scholar, has now expanded this form of analysis to the legal parts of the Pentateuch—the long sections that deal with laws and commandments laid down by God for the Jewish people. It is a difficult project, because we do not have the minutes of the meetings in which the redactors made their decisions as to what to include and what to reject, and we do not have any firsthand accounts of how each of the legal passages in the Bible came into being. And therefore, it takes either great courage or great impudence—depending on your point of view—to undertake this task. But Feld writes with so much clarity and grace that whatever your view on this point, the book is worth reading.

At least two elements of this argument run counter to the ideas on which many of us were raised. First, we were taught to understand the prophets as radicals and as outsiders—as people who fought against the rich and against the priests. Feld suggests the opposite. He claims that the prophets had a profound influence upon some of the priests, which is why they were able to eventually make their ideas acceptable to the people.

A second, perhaps more fundamental assumption with which many were raised is that the Torah is a single book with a single central claim, and that it therefore expresses a faith that we can choose to either obey or disobey. In contrast, Feld argues that the Torah contains many different points of view—and that this is precisely what makes it spiritually meaningful to us. He claims that its plurality and its inclusiveness, its ability to hold many different ideas in balance, is precisely what makes it so valuable. He argues that this is a precedent it sets that should enable people who have different views to live together.

Let us consider just one example of a contradiction that he finds in the Bible and what this contradiction has meant for later generations. Every source agrees that the revelation at Sinai was the central moment in the relationship between God and Israel. No one questions that in any of the three traditions Feld distinguishes. But each of these three traditions understands and describes the moment at Sinai in a very different way. Did Moses and the elders eat a festive meal in the presence of God, as one source seems to say? Or can no one see God and live, as another passage states? Did Moses go up to receive the tablets, as one source says, or did God come down to reveal His will, as another source says? Did all the people hear God speak, or did just Moses hear the words and transmit them to the people? Did God recite the Fourth Commandment in the version that is found in Exodus or in the version that we have in Deuteronomy?

These and the plethora of other such questions that exist in the narratives, but that can be found even more often in the law codes and commandments, turned the people of Israel into an interpreting community. They made Torah study a never-ending exposition into what the Torah meant and what the Torah means. And that is how the Torah has continued to live. Feld’s book is on target in this and much else, so it is worth our study as the arguments continue.

Rabbi Jack Riemer is the author of Finding God in Unexpected Places and The Day I Met Father Isaac in the Parking Lot and the coeditor of So That Your Values May Live: A Treasury of Jewish Ethical Wills.