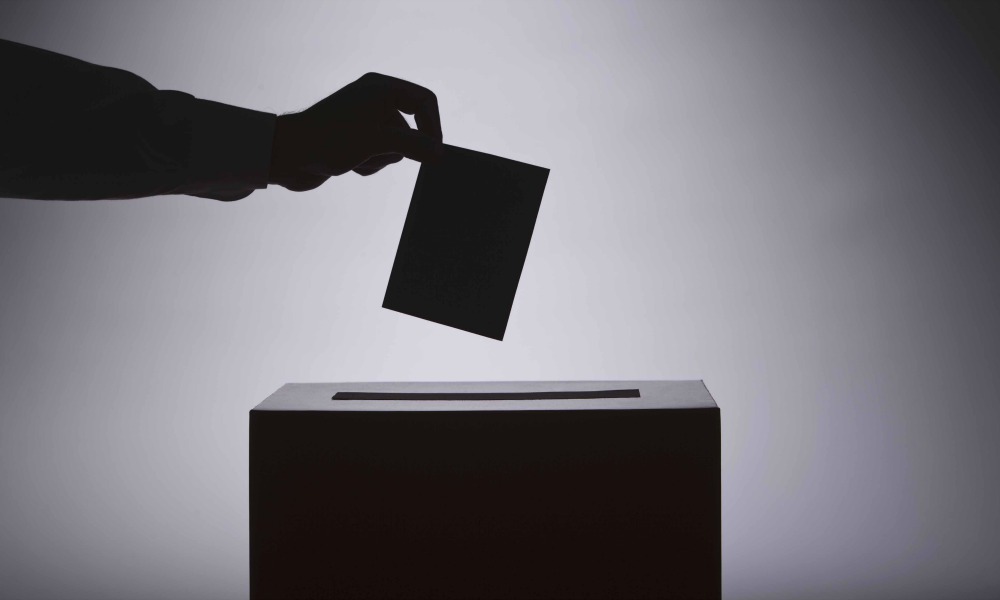 Are we commanded to vote?

Not necessarily commanded, but it was long ago suggested that we do what we can to contribute to the general welfare of the lands in which we sojourn. One could argue that voting may be a part of this contribution. The suggestion came to the prophet Jeremiah in a message from God, which he forwarded to our exiled ancestors following the destruction by the Babylonians of the First Jewish Commonwealth more than 2,400 years ago:

To all [those] I have exiled from Jerusalem to Babylon: “Build houses and settle down; plant gardens and eat of their yield. Start families, have children, and help your children start families, so that they too may have sons and daughters. Increase in number there; do not decrease. Also, seek the peace of the village to which I have exiled you, and pray to God on her behalf, for in her state of peace shall you too find peace” (Jeremiah 29:4-7).

Let’s start by pointing out how remarkable this question is, because it presumes that Jews are enfranchised to vote in the first place. We take this for granted now, but it wasn’t always the case. In the original American colonies under British rule, the right to vote and the right to hold office were restricted to white, Protestant, land-owning men. Over time, these restrictions were overturned—for Jews as well as for women and African Americans. Even now, a number of states, including Maryland and Mississippi, still prohibit any person who “denies the existence of a Supreme Being” from holding state office. This carve-out, if it could be enforced—and it probably can’t—would effectively eliminate secular, non-believing Jews from running for election, perhaps even Bernie Sanders, who has said he believes in God, but not in a traditional manner: “I am what I am, and what I believe in, and what my spirituality is about, is that we’re all in this together.”

In a normal election year, a secularly inclined candidate like Sanders might pay at the polls for not being an ardent synagogue-goer. Since this is hardly a normal election year, another challenge arises: Many Republican voters, and presumably some Jews among them, are considering not voting at all. Are they, or we, commanded to vote? No. Should we take for granted the right to vote? No. Should we work to protect those voting rights and expand them for everyone? Absolutely!

Every Jew has a duty to vote in the democratic elections in one’s nation of citizenship. Jewish law mandates the creation of civil government (Avot 3:2, Avodah Zara 4a) and obliges all who benefit from public services to help provide them (Bava Batra 7b, Bava Metzia 108a). Voting follows from this Jewish communitarian value against free-riding and from a “social compact”—recognized by Jews 700 years before Enlightenment democratic thought arose in Europe—by which Jews opting to live in a society thereby agree to support its government and laws (Rashbam, Bava Batra 54b). Most of all, Judaism views voting to be a holy act of divine partnership. Before selecting Bezalel as the Mishkan’s master builder, God told Moses to consult the people (Berakhot 55a): the modern elective franchise continues this legacy “for the sake of heaven” (Shulchan Aruch, C.M. 163:1). It follows that all government policies—from public order and foreign policy to education and the environment—are issues on which Jews are called to help renew and repair the world in holy partnership at the ballot box.

We may not be commanded, exactly, but we’re fools, hypocrites and worse if we fail to vote. Judaism puts values front and center, and in a democracy, voting is the core expression of values. Think we should “pursue justice” (Deuteronomy 16)? Vote. “Love the stranger/immigrant” (Deuteronomy 10)? Vote. Keep humans and Earth, adam and adamah, connected (Genesis 2)? Vote. Love our own, protect others (Leviticus 19) and honor all who are created in the Divine image (Genesis 1)? Vote.

Jewish history is instructive, too, for we’ve always fared best in open societies. True democracies with robust electorates rarely fight one another, are more stable and generally enfranchise not only the majority but, crucially, the minority as well. Here, our two great centers, Israel (with a Jewish majority) and America (just 2 percent Jewish), inform each other. How exactly should voters treat minorities? What to do when demagogic voices, in either land, seek to exclude and divide?

Exodus 23:2 says, in a hard-to-translate passage, that there is an obligation of aharei rabim l’hatot, which may mean to “incline after the majority”—a principle that has grounded Jewish democracy for more than 2,000 years and allows legal matters to be settled by a majority of judges. Ironically, the passage is also sometimes read as meaning the opposite—that one should not side with the mighty but bolster the minority. Either way, we must honor everyone (Avot 4:1), without fail. Where to start? Vote.

A man once came before the Chazon Ish (a Russian-born Orthodox rabbi, 1878-1953) and explained that he didn’t have enough money to pay his taxes and, therefore, would not be allowed to vote in an upcoming election. The Chazon Ish responded: “You should sell your tefillin and pay the taxes… tefillin, you can borrow from another, but the right to vote you cannot get from someone else.”

As this story illustrates, there have been times when Jews faced barriers to voting, or, though allowed to vote in theory, were unable to do so. (Of course, there were far worse times when legislation affirmatively stripped Jews of their rights, such as the Nuremberg Laws in 1930s Germany.) Thankfully, in the United States, the 24th Amendment protects one’s right to vote regardless of taxpayer status.

The Chazon Ish story tells us that voting is so important that one should sell one’s tefillin—a symbol of one’s commitment to observing the mitzvot, or commandments—in order to do so. I would suggest that for us, today, voting is more than a right or a privilege. It is an obligation incumbent upon us as equal citizens in a democratic society.

The Bible comes up short in conceptualizing the “democratic ideal” as we know it today. In the Torah, there is a clearly defined hierarchy of leadership. The Kohanim and Levi’im are granted religious privileges not open to everyone else. The Prophets describe, and usually castigate, the kings of Israel and Judah. Although there were kings whom the Prophets applauded, the bulk of their writings describe monarchy as an immensely flawed form of government.

It is in rabbinic literature that the value of democracy is put forth (Babylonian Talmud, Berakhot 55a). Rabbi Isaac said: “One does not appoint a leader for a community without consulting the community. How do we know this? It says in the Torah: ‘See, the Eternal One has singled out by name Bezalel’ (Exodus 35:30). God said to Moses, ‘Moses, is Bezalel worthy in your opinion?’ Moses answered God, ‘Ruler of the Universe, if he is worthy before You, how could he possibly not be worthy before me?’ God said to him, ‘Even so, go and ask them [the people]…’”

It is abundantly clear from this text that God demands our participation when appointing a leader for our community. In other words, yes, it is a mitzvah to vote!

It does not say in the Torah, “Thou shalt vote; I am the Lord.” The Torah’s laws generally take off from where the society is; they try to move the standard situation closer to the ideal. The Torah does not advocate voting for political leadership because it was given in a culture that was neither egalitarian nor democratic. The Torah does instruct that the king and the leaders be and act under the rule of law—but it does not deal with the population at large or with the selection process.

The prophet Jeremiah does say that the Israelites should join in the country where they live, should build it, seek its welfare and pray for it. Voting is a key way to assure the well-being of the country. I believe that democracy is the political system most likely to advance the Torah’s goal of tikkun olam—to repair the world—so that every human being is treated as an equal, valuable and unique image of God. But the mitzvah to vote will have to be written in by the Oral Law—the unfolding tradition.

The use of the word “commanded” makes this question easier. There are a lot of warm, fuzzy reasons to vote, but as a halachist, I am limited to citing two compelling reasons why one is actually obligated to do so. The first is an overarching principle of Jewish life that  translates again and again into normative behavior: Hakarat ha-tov, recognizing the good that someone or something has provided you. This is a great country for Jews. It is a minimal expectation of citizenship that we participate in the electoral process, and I see it as nothing less than obligatory to show our appreciation of this great country by acting on that expectation.

The second reason may be more controversial. In 1984, Rabbi Moshe Feinstein, the preeminent halachist of the late 20th century, wrote in a letter that all observant Jewish citizens of this country are obligated to vote. He wrote this during an election season in which many people felt the outcome was a foregone conclusion and any individual vote would have no value. Nonetheless, Rabbi Feinstein wrote—at the urging of some people in the know—that there are always people scrutinizing the voting habits of different communities, and that Jews have an obligation to vote in such a way that they will do the most good for their community. And he called it an exercise in “nosei b’ol ha-tzibbur”—the rabbis command one not only not to shirk community responsibility, but to seek out ways in which one may help ease the community’s burdens. So, he argued, where there are consequences for the community—consequences that he did not spell out—all Jews should vote.

Of course, one could theoretically imagine an election where all the choices were so terrible that it would be better not to vote. But that’s just a hypothetical.

There are many sources in Torah that talk about the imperative for civic engagement: the obligation for a system of justice in the Noahide Code, the very Noahide Code itself, the imperative to “pray for the welfare of the government” and many more. But saying that we are commanded to vote would be focusing on the symptom rather than the cause.

We are commanded to do what we can to “correct the world under the sovereignty of G-d”—to make our world better and more in tune with its innate goodness and sanctity. To the extent that this can be achieved at the ballot box, voting can be seen as an expression of our core Jewish values. But remembering to focus on the underlying imperative and aim can help to ensure that we maintain the right attitude toward it—an attitude within which political engagement is all about upholding our highest aspirations of ethics and love of a fellow, even those with whom we might happen to disagree.

Another reminder provided by voting: We each count. Every one. And each person counts for no more—and no less—than one. Although that may be arguable at times in the vagaries of our political structures, it never varies where it truly matters—in our absolute and essential value in the eyes of G-d.