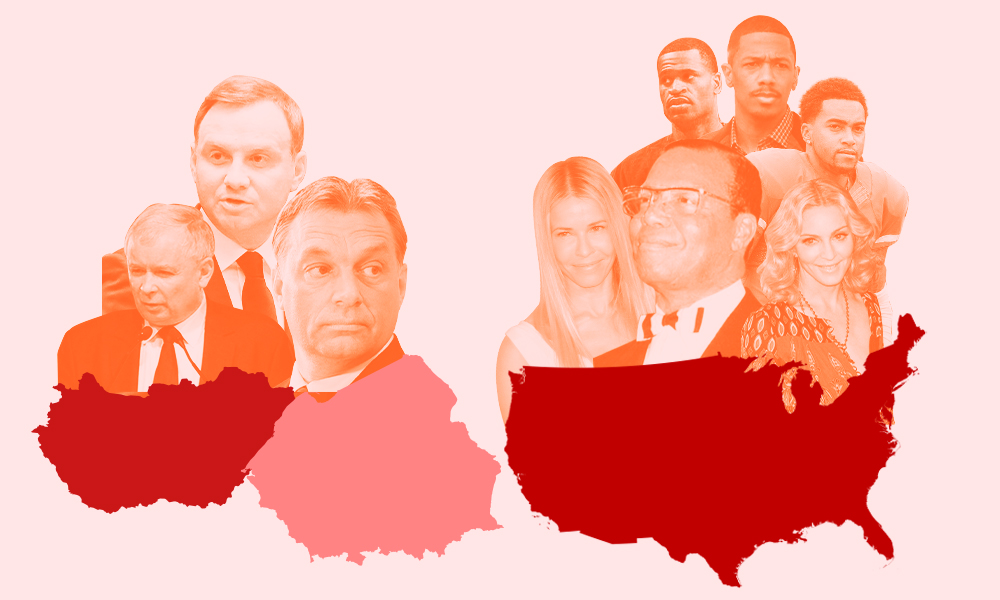 In July, we documented incidents in 16 different countries to add to the Anti-Semitism Monitor database. However, for the July roundup column, we are focusing on two particular regions of the world and two very different types of anti-Semitism. In Eastern Europe, authoritarian, right-wing leaders spin anti-Semitic conspiracy plots to appeal to the most xenophobic portions of their voting populations. In the United States, misguided luminaries supporting racial justice use their social media megaphones to employ similar anti-Semitic concepts.

In Eastern Europe, the two governments most brazenly trying to undermine the rule of law are Poland and Hungary. In July, ultra-nationalist, ruling parties in both countries employed prejudice against minorities for political gain.

Poland held a two-round presidential election in June and July, and President Andrzej Duda’s Law and Justice party (PiS) played the anti-LGBT and anti-Semitism cards in the crudest and most disturbing manner. The powerful leader and co-founder of PiS, Jarosław Kaczyński, Duda himself and state-controlled media were the primary mouthpieces in the campaign to appeal to anti-Semitic voters.

Most of PiS’ anti-Semitic appeals were of the dog-whistle variety—the word “Jew” was never employed, but voters with anti-Semitic attitudes understood who was being targeted. Knowing how certain conservative elements in Polish society resent any talk of restitution by Poland of stolen World War II-era, Jewish property, Kaczyński appeared on the right-wing Catholic and traditionally anti-Semitic radio station, Radio Maryjae, to criticize the opposition candidate, Rafał Trzaskowski, for considering restitution of Jewish property. Kaczyński stated that “[o]nly someone without a Polish soul, a Polish heart and a Polish mind could say something like that.”

Duda also demagogued the restitution issue by declaring that he would never reward one ethnic group over another. The government-controlled state television made the appeal explicit. The evening news asked, “[w]ill Trzaskowski fulfil Jewish demands?”  The channel had previously suggested that the opposition would “rob” Polish taxpayers of $200 billion zloty ($54 billion) to give to the Jews. TV also tied Trzaskowski to 17th-century “Jewish philosopher” Baruch Spinoza and the Jewish philanthropist and prime 21st-century target of anti-Semites, George Soros.

After the election, when JTA and The Jerusalem Post published a column I wrote about this anti-Semitic campaign, some Polish government supporters became apoplectic. Rather than try to justify the explicit anti-Semitic demagoguery, they resorted to what-about-ism— pointing out how anti-Semitism was worse in other nations.

In this terrible and authoritarian Poland, there are even streets like Jerusalem Avenue https://t.co/FtdatPUnb2, thousands of Jews get Polish passport, there are Jewish culture festivals and the synagogues are not attacked by crazy racists like in Halle, Germany. Go to Germany! pic.twitter.com/gRU06vk7UK

They claimed that the column describing what PiS leaders and PiS controlled TV said was just a matter of Jewish irrational hate of Poland—#antiPolonism.

Jewish media like @JTAnews, @Jerusalem_Post, and an ex-special envoy on anti-Semitism @IraForman have #polonophobia and #antipolonism problem. They wake up from the coronavirus apathy and spread again their #HateSpeech and anti-Polish slurs. https://t.co/H4m9COiu4S

Then there were the Polish nationalists who blamed Jews for anti-Semitism.

In my opinion there is no antisemitism problem in Poland. But you are working hard to make it happen.

Finally, there was just hard-core anti-Semitism.

Meanwhile, in Hungary, Prime Minister Viktor Orbán returned from four days in Brussels where he desperately labored to stop efforts within the European Union to punish his government for undermining the rule of law. In a monologue on Hungarian television, Orbán used an obscure slang term—libernyákok—to describe European prime ministers who have been critical of the Orbán government. While the term might have been puzzling to many Hungarians, those on the extreme right knew precisely what the prime minister was implying. The particular word has been used in post-communist Hungary as a slur by right-wing anti-Semites that translates to“Jewish faggots.”

During this past month on the other side of the Atlantic, a number of professional athletes and other celebrities, most but not all of whom are African Americans, praised Minister Louis Farrakhan in the wake of his July 4 worldwide address. In some cases they channeled some of his most odious anti-Semitic themes from that lecture and earlier speeches.

Jewish-American comedian, actress and talk-show host Chelsea Handler praised Farrakhan’s message as powerful and posted a video of the Minister. Singer, songwriter and actress Madonna posted a trailer for the July 4 Farrakhan speech.  NFL player, DeSean Jackson and former NBA player Stephen Jackson proclaimed their admiration of Farrakhan, and posted tropes about Jews who “blackmail America” and Rothschilds controlling all the banks.  A YouTube interview with rap figure “Professor Griff” hosted by comedian, rapper and television host Nick Cannon resurfaced, during which anti-Jewish rhetoric and conspiracy theories were discussed. Rapper and ardent supporter of Farrakhan Ice Cube posted anti-Semitic graphics online, and rapper Electronica cited the Christian Bible and Farrakhan to claim that Jews are not the true children of Israel.

The pushback arising from these incidents caused a number of the above celebrities to apologize for their anti-Semitic language. Moreover, a number of prominent African Americans, such as NBA legends Charles Barkley and Kareem Abdul-Jabbar, forthrightly engaged by harshly criticizing these celebrities for propagating anti-Jewish conspiracy theories.