Sixth & I, the historic Washington, DC synagogue and culture center, was vandalized on Friday less than two months after a similar incident at the Washington Hebrew Congregation. Sixth & I staff reported finding the word “JEW” etched into a wooden door and several swastikas drawn on a staircase, according to communications manager Michelle Eider. 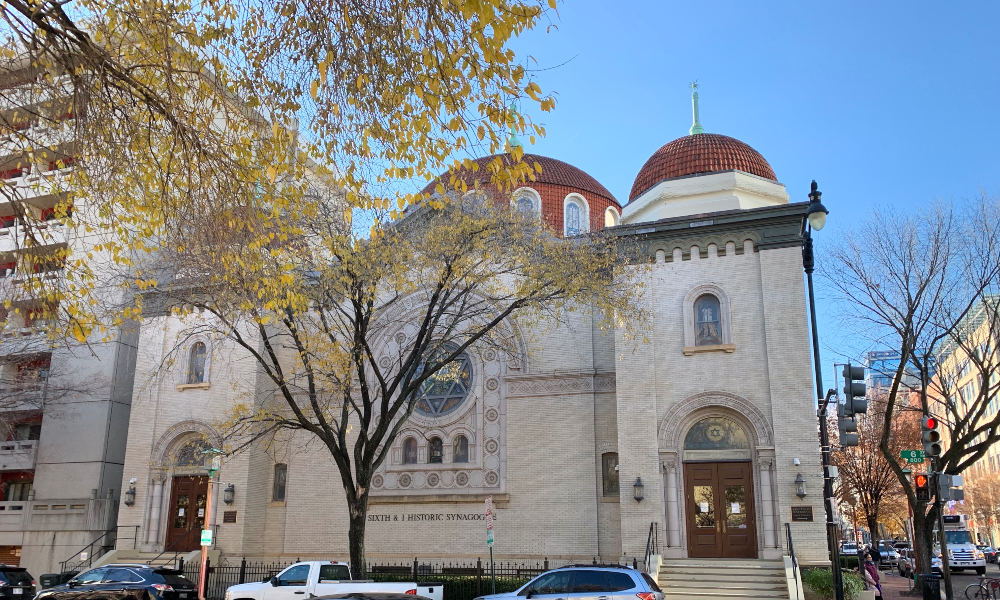 Side view of Sixth & I

On Monday, DC police arrested 28-year-old Luis Montsinos and charged him with defacement and destruction of property and resisting arrest. According to the police report. Officers designated the vandalism as a potential anti-Jewish hate crime.“Nothing is more important than the security and safety of our community,” says Heather Moran, Sixth & I’s CEO and executive director, “and we are working closely with the Metropolitan Police Department and other local law enforcement.”

Built in 1908, the Sixth & I synagogue hosts both religious services as well as arts and culture programming. Following the incident, three rabbis from Sixth & I sent an email to synagogue members. “While the damage to the building is minimal and will be fixed quickly, events like this can throw even the toughest person into a tailspin. Given the current climate, we unfortunately are not surprised by this happening,” they wrote. “In these moments, it is important to remember that it is not a shame but an honor to be a Jew…We can and will respond to this hateful act with open doors, in resilience and spirit.”

Outrage against the vandalism and support for Sixth & I erupted on Twitter, with many expressing sadness at the targeting of religious centers and solidarity with the Jewish community.

.@SixthandI is a religous and cultural haven in the heart of DC. This is deeply saddening. Synagogues, churches & mosques are houses of worship and peace, a sanctuary for communities. Now they are vulnerable targets due to fear and bigotry. Muslims stand with our Jewish cousins. https://t.co/ML8Fz0Ik7w

I am devastated to learn that my beloved @SixthandI was victimized and defaced with antisemitic Graffiti this past Shabbat. I have no words for what this place means to me. My husband converted there. Rabbi Shira married us. My daughter was named there. I am distraught. pic.twitter.com/NwvAVF4T4j

According to Moment’s Anti-Semitism Monitor, this is the third incident of anti-Semitic vandalism in DC this year. In January, police found “# I WANT JEXIT” scrawled on the sidewalk outside an autobody shop, and in October, the Washington Hebrew Congregation found anti-Semitic statements and other obscene language and images drawn on the rear of the building.

Prior to the October vandalism, Lustig and other congregational leaders began hosting conversations addressing the issue of combating this increasing anti-Semitism. A panel discussing the rise of anti-Semitism and the role of religious leaders in combating bigotry had over 500 people in attendance, he says, “which shows that this issue is of great concern to our congregation and people in the metropolitan area.”

END_OF_DOCUMENT_TOKEN_TO_BE_REPLACED

One thought on “Anti-Semitic Graffiti Reported at DC Synagogue”