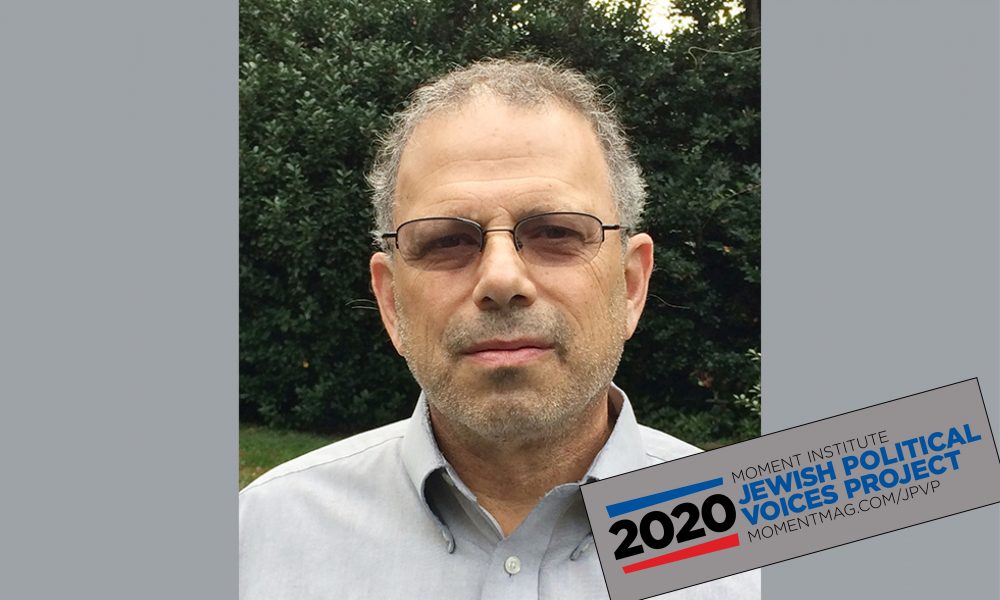 Alan Zimmerman (61), an Independent from Charlottesville, VA, was president of Congregation Beth Israel in Charlottesville during the Unite the Right march in August 2017. Zimmerman remembers standing on the steps, watching armed neo-Nazis shouting “Heil Hitler.” He was “not surprised that there is anti-Semitism in America—I’m not naïve—but that it could be displayed so brazenly and even proudly in the streets of an American city was frankly shocking.”

Anyone who was at all familiar with Trump’s record up to that point knew he was not a particularly skilled executive and that his presidency would probably not turn out well for the country, apart from whether one agrees with his policy positions or not. I have been surprised at two things, however. One is his utter lack of self-control when it comes to tweeting or saying highly inappropriate things, most notably his advocacy of a world view ground in white supremacy. I’m not surprised he holds these views, but I am a bit shocked at his willingness to express them so openly. The second is the tolerance among some of his supporters for this inappropriate behavior.

He has kept some promises, but they have been mainly symbolic, such as building a wall or moving the U.S. Israeli embassy to Jerusalem. These promises are neither good nor bad, but for the most part substantively insignificant. That said, however, the symbolism of these promises, combined with actual policies he has implemented, has been mostly bad for the country. In some cases, his actions have been immoral, such as his immigration policies. In others, they’ve simply been bad policy, such as with respect to Israel, NATO, and an ill-advised tax cut, to name three areas. His criminal justice reform, on the other hand, was a positive. Finally, I am still waiting for his great health care plan.

Has Joe Biden turned out to be the type of candidate you expected?

What does Donald Trump need to do to win?

I don’t think he has a chance to win a fair election. His only hope is a strategy of massive voter suppression, including interfering with mail-in voting and the use of street violence to frighten people away from polls, combined with a refusal to accept the results.

Do you think Joe Biden has a chance at winning the election?

He needs to put forth a reasonably progressive policy agenda, especially on issues of race relations and police reform.

I don’t think this is a meaningful question. He has no desire to do so, and even if he did, it would require him to do the impossible, namely, admit that he has screwed the nation up and change completely. You might as well ask what my dog would need to do to drive my car.

I think the most important issue we have is restoring integrity to and public faith in government and our institutions. In terms of issues, we obviously need to get a handle on COVID-19 first. Until that happens, nothing else can get done. After that, I think the following are the most significant issues that need to be addressed, in order: Enacting a plan for affordable and universal health care insurance coverage; reforming immigration, granting citizenship to DACA recipients and restoring America’s role as a haven for people seeking security and freedom; bringing sanity to the tax code so that corporations and the mega-rich pay a larger and fairer share; providing a national template for police reform. I think all of this can happen if Biden is elected and if Democrats also control the Senate and do away with the filibuster.

I have many. My main concerns are right-wing violence, the use of federal law enforcement to suppress the vote and frighten voters, and Trump’s refusal to accept the election results if he loses.

No. Because of the pandemic, we should make allowances for people who do not want to go out to the polls, and provide as many way for people to vote as possible.

His incompetent handling of the pandemic was a revelation to many people who previously may have thought he was a successful businessman (even though he was not). In that sense, I think it has clearly affected voter choices. As for the BLM issue, I don’t know that his actions changed many voters’ minds as much as it confirmed what many people opposing him already believe, namely, that he is a racist.

It will probably depress turnout. I think the desire and need to rid the country of Trump is so great and so critical that many people will brave the virus to cast a ballot if they need to, so turnout will be the highest in history. But without COVID, it would have been greater.

I live in Virginia. We do a pretty good job of running elections here, so this won’t be an issue.

I will be going to the polls because I don’t trust Trump not to interfere with mail-in voting (which is a choice for me) and I want to be sure my vote counts on election day.

Where I live in Central Virginia, the pandemic doesn’t seem to have hit too hard, yet. But I have known several people who got it, one person who, while elderly, needlessly passed away, but more tragically with her loved ones unable to be with her. The current state of the pandemic nationally (4.5 million cases, 150,000+ deaths) is at the feet of Trump. It didn’t have to be this way.

I think it should be a local decision. If it were me, I would seek input from school administrators, teachers, parents, and students, along with the medical experts, to figure out how best to proceed for each community. At our synagogue, for example, we have a plan to open our pre-school as an outdoor school. Our director worked with epidemiologists in our Jewish community, as well as with parents and teachers, to design a program that we think is safe, but is flexible enough to respond quickly if there are any problems. But simply trying to force kids back into classrooms without thought or preparation, simply because Trump wants to create an image of normalcy will lead to further disaster, much as the push to reopen the states before conditions were right to do so, has led to disaster in Florida, Texas, and Arizona.