When the shots rang out at Kent State on May 4, 1970, a friend pushed 18-year-old freshman Nina Jacobs Stanley to the ground as bullets whizzed overhead.

A participant in the anti-Vietnam demonstrations that swept campus, Stanley had been assured by her World War II veteran father that the Ohio National Guard troops couldn’t possibly be armed with live ammunition. She had never heard a gunshot in her life.

When she saw the bodies on the ground, she remembers thinking: “I didn’t know blanks could do that!”

It was only then that the magnitude of what Nina Jacobs Stanley had just witnessed began to sink in.

“It was about the worst day of my life,” she says, 50 years after the epic fusillade that killed four, wounded nine and unleashed a newly urgent wave of protests nationwide.

“I’ll never get over what happened,” she says. “It will never leave me.”

Stanley, who is a participant in Moment’s Jewish Political Voices Project, had planned on attending the 50th-anniversary observances on the Kent State campus. All her friends would be there; she booked a hotel reservation a year in advance. But Covid-19 ended all that. A nation on the edge 50 years ago is facing upheaval of a different order.

So on Monday, Stanley logged onto an abbreviated online version of the observance, but otherwise marked the day mostly alone at her home outside Cincinnati. “My friends are sending me emails and posting on Facebook,” she says. “But I’m very lonely.”

Kent State worked its way into mainstream American history and culture. “Ohio” by Crosby, Stills, Nash & Young was a virtual call to revolution—one that many anti-war activists of the time believed was inevitable.

But the focus on Kent State evoked bitter feelings among African American activists who bridled at the inequitable treatment of black student victims of similar shootings in Orangeburg, South Carolina., and Jackson State in Mississippi.

Unique or not, Kent State crystallized the anguish of the era. It damaged the Nixon presidency enough to put it into a tailspin that ended in Watergate. Four days after Kent State, construction workers in lower Manhattan waded into an anti-war demonstration and beat demonstrators with fists and metal pipes.

Nixon hailed them as heroes, donning a hard hat as a symbol of his “silent majority” support. Some commentators believe it marked the onset of a political dividing line that has lingered into the Trump era.

Stanley enrolled at Kent State as kind of a lark. The daughter of family friends in Long Island was applying there. And although she had never heard of it, she followed suit. It was a tumultuous year to be on most any campus in America.

The daughter of liberal Jewish parents who grew up in Norfolk, Virginia, Stanley graduated naturally to anti-war activism. Three of four Kent State victims were Jewish and Stanley was good friends with three of them. Among them was Jeffrey Miller, whose body was photographed lying flat on the ground as a teenage girl kneels over him in tears—an image that came to encapsulate the horror of Kent State. 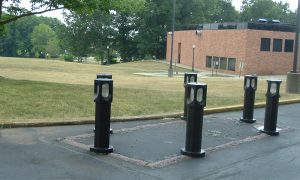 Suffering from a form of PTSD after the shooting, Stanley sought counseling with the campus rabbi and others. The experience was not as much a turning point in her Jewish identity as it was a confirmation of it. At a minimum, “the shooting validated everything I had been brought up to believe,” she says. “It didn’t radicalize me that much because I already was.”

For Stanley, the worst part of the remembrance is the realization that the lifelong liberal-left values that form her personal bedrock have advanced very little. In fact, she sees them as being in full retreat in the Trump era.

“I think we’re in worse shape now,” she says. “As much as I hated Nixon, he understood government: Earth Day, cancer research, China, environmental legislation. We’re in big trouble now.”