Maury Yeston Looks at the Past, Present and Future in an Off-Broadway Show

Looking back at his almost 40-year career as a multi-award winning musical theater composer-lyricist (Nine, Titanic, Grand Hotel, Death Takes a Holiday), Maury Yeston doesn’t want to single out his favorite production, but rather celebrate achieving his elusive goal: “living a life devoted to and occupied with composing music and lyrics,” he says. “I didn’t have to give up my dreams to go to medical school or law school.”

Even in retrospect, Yeston marvels. And to commemorate his impressive contribution, Off-Broadway’s York Theatre Company is presenting a compilation of his songs, Anything Can Happen in the Theater, The Musical World of Maury Yeston (running through December 29th). Starring five versatile performers seamlessly slipping in and out of disparate characters from a range of his shows, the piece was conceived and directed by Tony Award-winning Gerard Alessandrini, best known for his ground-breaking Forbidden Broadway, an evolving series of send-ups—there have been 25 editions—that affectionately parody all things hot on the musical theater scene in any given season.

Sitting in a York Theater rehearsal room, the loquacious, yet thoughtful, knowledgeable and at moments heady 74-year-old Yeston says Anything Can Happen in the Theater is a love letter to melody—“the blood, heartbeat, flow and history of pop songs.”All his heroes, “whether it was Jerome Kern, Frank Loesser, George Gershwin or Richard Rogers, all wrote melodies,” Yeston says. “I was ten years old when I saw My Fair Lady. Julie Andrews was 20. Those Lerner and Lowe melodies thrilled me.”

While his adoration for music came first, as he matured, Yeston grew to love the art of writing lyrics as well, especially those that reflected the essence of the American songbook. To wit: the love song—from tragic to comic, from soulful heartache to irreverent satire. His songs express the infinite variety of love and the impulses that inform it. “These songs may be very complex, but they have to seem simple and effortless,” Yeston says. “It’s not just about writing the song but also writing for gifted actors who find and perform what the creators didn’t even know existed.”

It should be noted that Yeston has also forged classical compositions including a cello concerto premiered by Yo-Yo Ma; and music for a full-length dance piece, Tom Sawyer: A Ballet in Three Acts. He is a musicologist (undergraduate degree from Yale, graduate studies at Cambridge), who moved up the hierarchy to become a professor, ultimately heading Yale’s undergraduate music department and founding its Jazz Studies program. But before any of that happened (by the time he was fourteen years old), he was committed to creating musical theater. It was in his DNA he says. His grandfather was a cantor.

“If even before a child speaks he’s taken into a huge room filled with people staring at a man in a costume singing to large crowds at the top of his lungs and expressing everyone’s emotions, there’s nothing unusual in it,” says Yeston. “ That’s what you do when you write musicals. Not that I put myself in their category, but Kurt Weil, Irving Berlin, George Gershwin and Harold Rome all had grandfathers who were cantors. Cole Porter asked Richard Rogers, ‘What’s your secret about?’ and Rogers said, ‘Yiddish melody.’ I think Porter thought Yiddish when he wrote, ‘You’d be so nice to come home to,’” Yeston sings the tune, underscoring the Yiddish cadence and rhythms.

A recognized authority on the Yiddish influence in musical theater, Yeston served as a consultant for the BBC documentary Broadway Musicals, A Jewish Legacy in addition to being featured in the film. For him, despite the many new players on the scene who hail from a spectrum of ethnic/cultural backgrounds—he thinks Lin-Manuel Miranda is brilliant—the Jewish aesthetic remains and will continue to inform American musical theater. Quoting T.S. Eliot, he says, “We move forward knee-deep in tradition.”

From childhood, he was immersed in Orthodoxy and attended a Yeshiva, an experience he now views with ambivalence. Because his parents were not as religious as the school might have liked, many of the teachers targeted him. They were excessively strict and demanding, Yeston recalls; not least because they themselves immigrated in a post-Holocaust world. The near-annihilation of European Jews and the abandoning of religious traditions by the few who remained (especially in the United States) further threatened the future of Jews, or so they believed. It was imperative, they felt, to pound Orthodoxy into Jewish children.

“That’s where the intensity and cruelty came in,” Yeston says. “It showed me the worst of human behavior early on. I now see the reason for it, though I don’t necessarily forgive them for it. What most bothers me about Orthodoxy and much of all organized religion is that its participants don’t live their values…Sanctimony is no replacement for compassion and kindness. There was a time I thought about resigning from Judaism and realized that was not possible. I now define my Jewishness through my behavior. I try to behave in accordance with universal principles, which includes the best of Jewish tradition.”

In varying ways, each of Yeston’s productions embraces those life-affirming tenets that show humanity at its most moral even in the blackest moments, cultural, historical and/or personal, nowhere more obviously than his Titanic. It brings to vivid life an odious, self-serving class system and at the same time dramatizes people at their bravest and most self-sacrificing.

Titanic was significant as a career lesson, too. In the face of all the naysayers, the show became a mega-hit earning a Tony for Best Score. Initially, everyone felt it had failure written all over it. The very idea of making a musical about the worst maritime disaster ever seemed absurd at best. 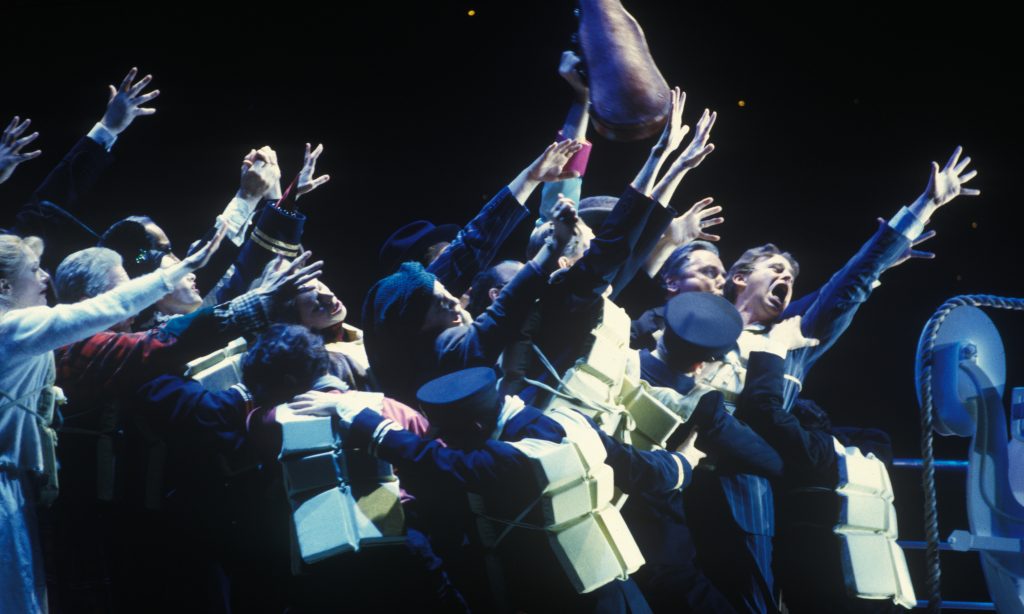 The key to success, Yeston says only half-jokingly, is to “lower expectations.” You can only go up from there. On the other hand, if there’s the belief that a masterpiece is coming to Broadway, you’ve created an audience who says, ‘Show me.’”

Still, it has not been all smooth sailing for Yeston. His well-publicized Phantom production was completed before Andrew Lloyd Webber’s iconic Phantom of the Opera, but for whatever reason, Lloyd Webber’s piece took off first, and by then it was too late for Yeston’s more intimate spin on Gaston Leroux‘s 1910 novel. It took disappointment to a whole new level, or what he prefers to dub, “That’s show-biz.” (It helps that it has enjoyed an ongoing life in theaters, both regional and international.)

His groundbreaking 1982 Nine, based on Federico Fellini’s film 8 1⁄2, also continues to boast global productions, which surprises Yeston. The central character, Guido, a misogynist writ large, might not fly in the post-#MeToo era, he says. But viewed from another perspective, adds Yeston, Guido learns important life lessons thanks to all the women he has hurt. It’s a proto-feminist statement. 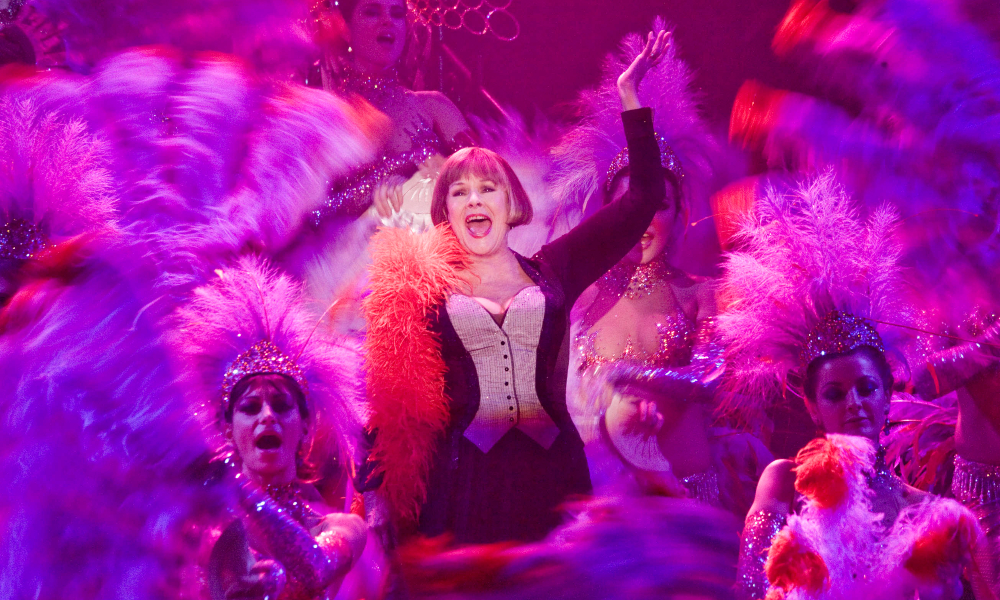 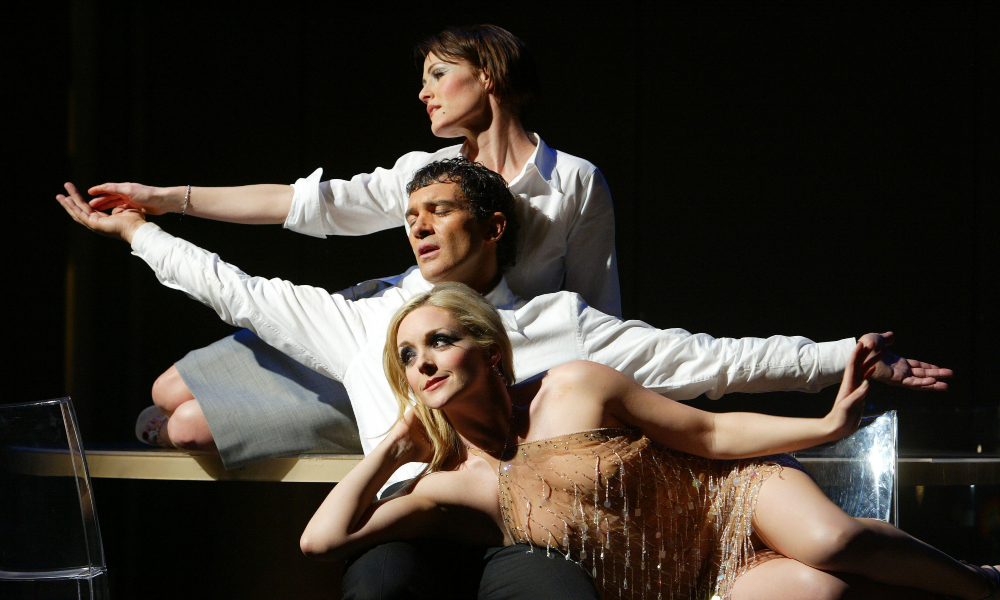 “That show did not revolutionize Broadway, but it put my brick in the wall,” Yeston says. “I don’t know if I’ve reflected the zeitgeist. I’d prefer to think I contributed to it.”

His upcoming projects include a musical adaptation of Preston Sturgis’ 1941 classic, Lady Eve and a musical theater piece based on the building of the Brooklyn Bridge, an extraordinary (indeed unprecedented) engineering feat launched in 1869 and completed in 1883. It had great importance—social, historical, economic—given its post-Civil War time frame and metaphorically resonates today. “There were so many hopeful stories involved in the building of the Brooklyn Bridge,” he says. “We need to build bridges now. I’m as passionate about this project as I was with Titanic. I don’t care if it takes seven years.”

Simi Horwitz is an award-winning arts reporter and film reviewer who recently won a first-place Simon Rockower Award for her piece “Abby Stein: A Gender Transition Through a Jewish Lens,” published by Moment Magazine.

Top photo:  Maury Yeston and poster for Anything Can Happen in the Theater. Credit: The York Theatre Company

Ruth K. Westheimer has led a remarkable life. Long before she became a world-famous sex therapist, she escaped the Holocaust on the Kindertransport to Switzerland and was a teenage sharpshooter in the Haganah. As a young woman she studied and taught at the university in Paris before making her way to the United States—and “becoming Dr Ruth.” She is in conversation about how to live life to the fullest with Tovah Feldshuh, the six-time Tony- and Emmy-nominated actor who plays her in the Off-Broadway show Becoming Dr Ruth. Westheimer and Feldshuh are joined by Moment editor-in-chief Nadine Epstein.

END_OF_DOCUMENT_TOKEN_TO_BE_REPLACED

Broadway actor and singer Bruce Sabath reflects on his relationship with Stephen Sondheim, who died on November 26.

END_OF_DOCUMENT_TOKEN_TO_BE_REPLACED

Twitter Explained | Should the Hype for Hamilton Be Real?

There’s no doubt that Hamilton will become part of larger conversations rethinking depictions of the founding fathers, right alongside the statues and history books that society is beginning to pick apart in an attempt to rectify America’s long history of racial injustices. But today, on what Twitter has ordained Hamilton Day, people seem to be taking a moment to just enjoy the show for it’s groundbreaking, once in a lifetime artfulness, appreciating how lucky we are to be alive right now.

END_OF_DOCUMENT_TOKEN_TO_BE_REPLACED

The (Soul) Doctor is In

Facebook Twitter Pinterest linkedin Telegram
The rabbi is dancing and singing, his congregation swooning, his synagogue…absent. We are watching an actor only pretend to be a ...

END_OF_DOCUMENT_TOKEN_TO_BE_REPLACED

The Jewish Side of "The Book of Mormon."

END_OF_DOCUMENT_TOKEN_TO_BE_REPLACED

The Jewish Side of “The Book of Mormon.”