The very first sand floor synagogue was built in Amsterdam by the Sephardic community in 1675. Fine sand was scattered over a wooden floor for preservation of building materials, but this could also be used to help conceal Judaic practices by muffling sounds of worship and prayer. It’s documented as one the wealthiest and most expansive Jewish synagogues of its time and is a magnificent example of the Dutch Golden Age.

Traditions spread, and as Jews began to migrate aboard ships during the early 17th century, so spread the Sephardic, Dutch custom of the sand-bottom floor as Jewish families settled in island paradise.

Today, there are only five sand synagogues remaining in the world, three of them in the Caribbean, located on the islands of Curacao, Jamaica, St. Thomas, one in South America in Suriname, and the fifth in their birth place, the Netherlands.

Here are the three sand synagogues remaining in the Caribbean: 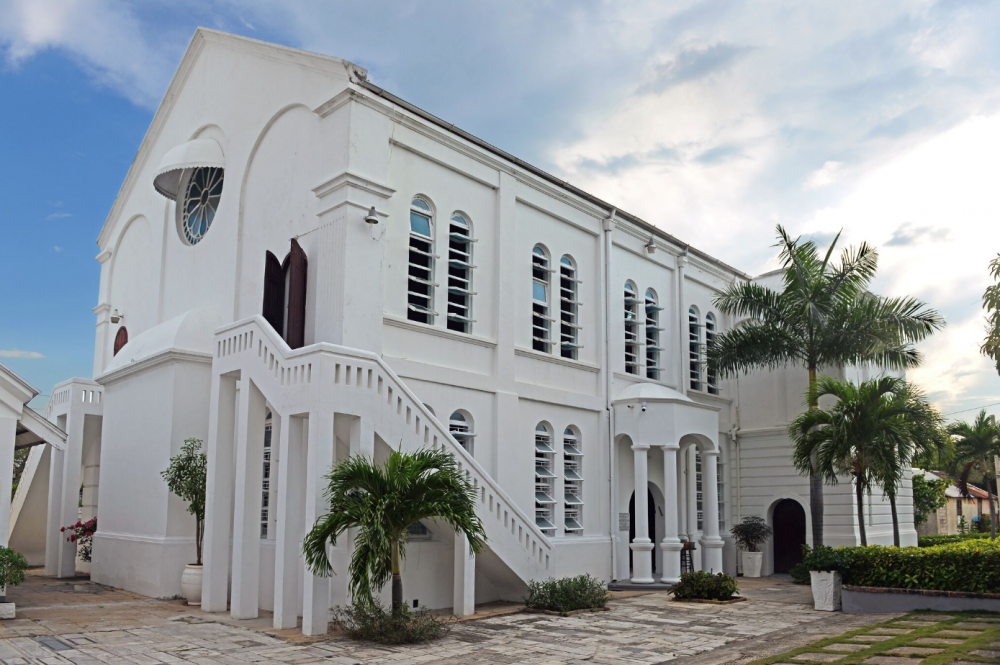 When my family traveled here in the spring, Rabbi Margaret Henriques’ community met us with intrigue and excitement. We stood in awe of the perfectly-groomed, white-sand floors of the temple until the rabbi allowed our family a private first experience of the sand-floor synagogue. Afterwards, we walked through the memorial garden with centuries’-old Jewish tombstones. There are actually over 20 Jewish cemeteries on the island (one beneath the Red Stripe factory), even with a total modern day population of 200 Jews.

We were honored to be called to the bimah to light the Shabbat candles as the service began. It was even more empowering to hear the soft and wise words of Rabbi Henriques, as her sixth-generation Jamaican knowledge, advice and accent filled the minds of our family and the congregation. 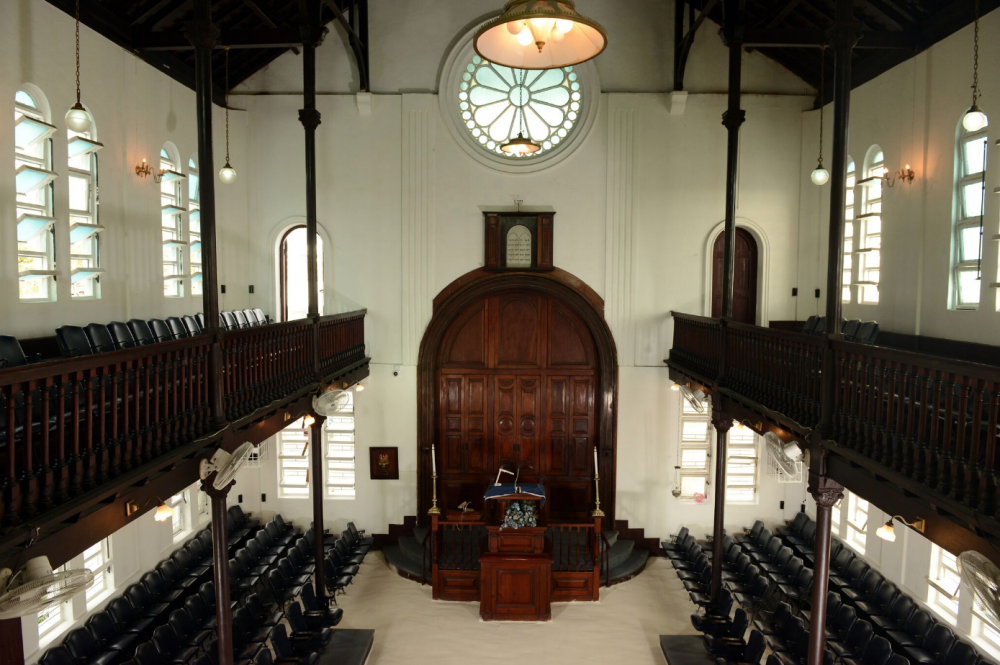 The next hour we celebrated the last Shabbat before Passover. The songs were sung and chanted in different accents, but the spirit and simplicity of the Shabbat in the sand synagogue were astounding.

One of my favorite conversations I heard amongst the congregation was between my daughter and another little boy in the temple that evening that had joined his father. There weren’t actually any words; it was just a child’s game of pushing sand in bare feet together towards a common goal, which was the original purpose of this very building. 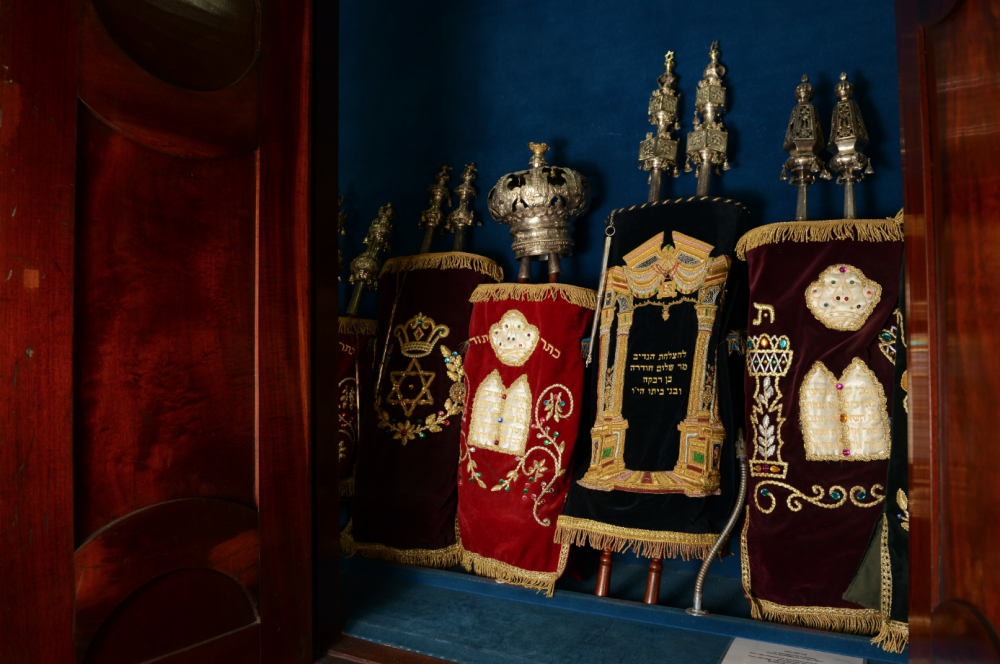 After our synagogue experience that evening, we gathered with the congregation in their Heritage Center for prayer, juice and challah. Our children were doted upon and my many, many, questions answered. I met members of the congregation with direct lineage to the pirates and Port Royal.

On our return trip to Ocho Rios, the children sung their favorite Shabbat songs to the baby as he drifted off to sleep and the driver spoke in amazement of the service he witnessed. I did get one bring on my cell phone and a picture that lit up the night atmosphere as we were weaving through Fern Gulley towards the hotel. It was a photo my friend had sent me, upon my request earlier that evening, of my friend’s beach wedding—with Rabbi Henriques presiding over the ceremony and guests, including my husband and I. We had met the rabbi years before on the sand, and it was he, his family and his congregation that brought us back to Jamaica with our three children to begin this epic journey of faith, secrecy, adventure and tropical paradise, on sand. 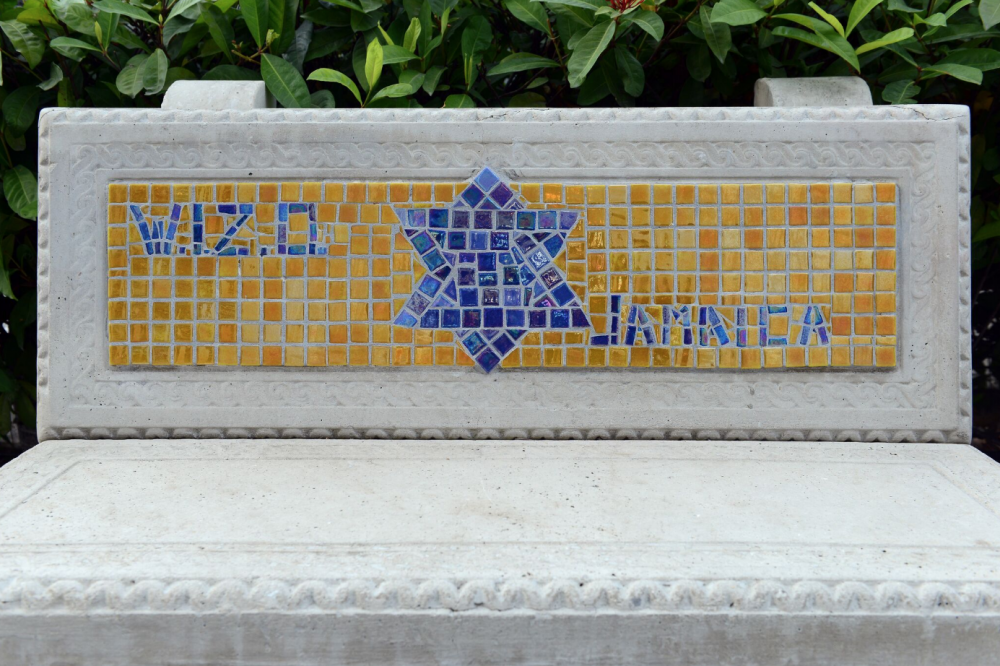 Located in the Queens Quarters, in Charlotte Amalie, the central business district in the capital of the island, this is the most visited of all the island synagogues. Constructed in 1833, the congregation for which it was built dates back to 1792. St. Thomas’ significance is its record as the longest continuous-Jewish temple on United States soil, and was honored with a National Historic Landmark designation in 1997. Today, Congregation Beracha Veshalom Vegmiluth Hasadim operates the synagogue.

This sand synagogue is the most visited of the five in the world because of ease and accessibility. “There are some days with five cruises in port and up to 14,000 additional people on the island. Even though we might start a tour at one time, there are usually guests wandering in—coming and going—and our doors are always open,” explains Rabbi Michael L. Feshbach, of the Hebrew Congregation of St. Thomas.

Rabbi Feshbach was appointed in July 2017, weeks before devastating Hurricane Irma. “This Temple had not missed a Shabbat service in 223 years, and they were not about to miss this one on my account. It took me nearly three and a half hours to get to the temple and I was finally able to get cell service once I arrived. It was 5 p.m. on Friday night, and eight people were able to attend, with an additional three via Skype from Maine!” he says. “We had enough for a minyan.” He adds, “Sometimes we don’t have a minyan, so I count the iguana as the eighth.”

When the synagogue is packed, with up to hundreds of visitors a day, the rabbi and his congregation are thrilled to open their doors to various communities from around the world. “We host 40 to 50 destination bar and bat mitzvahs here each year. It’s one of my favorite ceremonies. Families unite from all over the globe and experience Judaism and prayer in our sanctuary.”

The Dutch, Caribbean island is the most easily understandable sand synagogue—and for good reason, as the island has maintained consistent Dutch rule. The community dates back to the 1650s, when a dozen or so Sephardic families arrived from Amsterdam, and today the temple hosts a Hebrew school for the 450 Cuaraco Jews.

Ryan Schuessler has visited the Cuaraco Temple and written about the sand-bottom floor, and he also covered the Jewish cemetery in Cuaraco for Public Radio International. Schuessler’s excellent with details; he is an exhibition developer at the Field Museum of Chicago. However, it’s in his spare time he gets to explore his hobby of writing about his culture and the Jewish diaspora in unexpected places. “The Cuaraco Temple is fascinating,” he says. “They change out the sand every few years from sand in a river they dredge in Suriname. Apparently, Caribbean sand is too salty and would ruin the wood floors.”

However, the most interesting part of the temple for Schuessler is how it blends seamlessly with the colorful architecture of the island. “Walking through the tropical island you don’t expect to find the Western hemisphere’s oldest synagogue. It’s a massive building, a cathedral-like sanctuary in a bustling old town.”

Schuessler attended Shabbat, without electricity, as is custom. “There is a Jewish museum attached with artifacts in the cases that are still used for services and High Holidays. It’s a living museum because it is a living, vibrant community.”

Larry Bleiberg agrees with Schuessler. “It’s such an incredible community, a beautiful place, you really get a sense of time and history. This construction is from before synagogues were even in America, before there was even an America. It helps you grasp the concept there were Jews in this part of the Caribbean.”

END_OF_DOCUMENT_TOKEN_TO_BE_REPLACED

4 thoughts on “A Guide to Sand Synagogues”