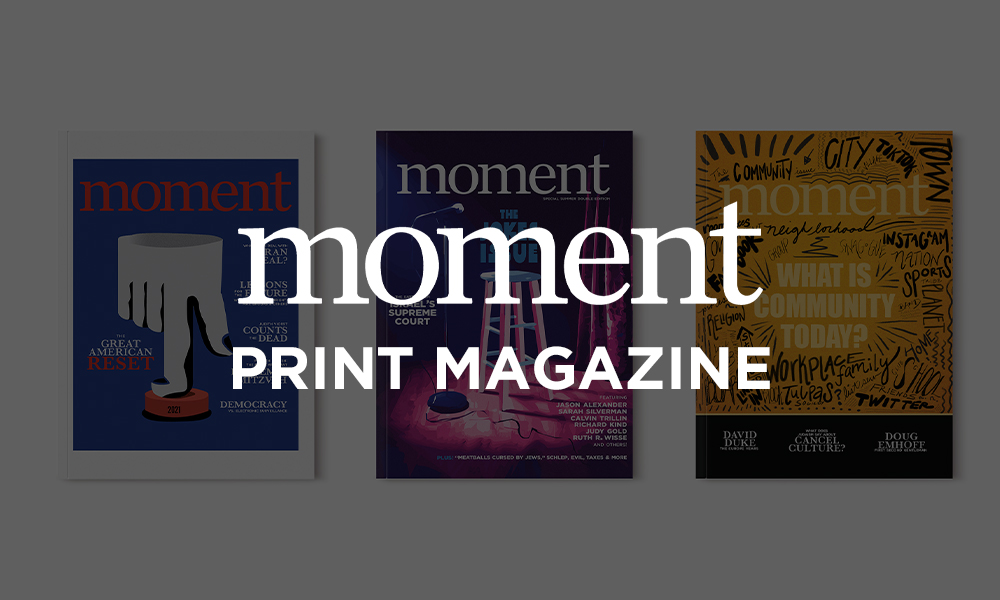 An award-winning independent print and digital publication that provides a Jewish lens on the issues that excite, trouble and inspire Americans today 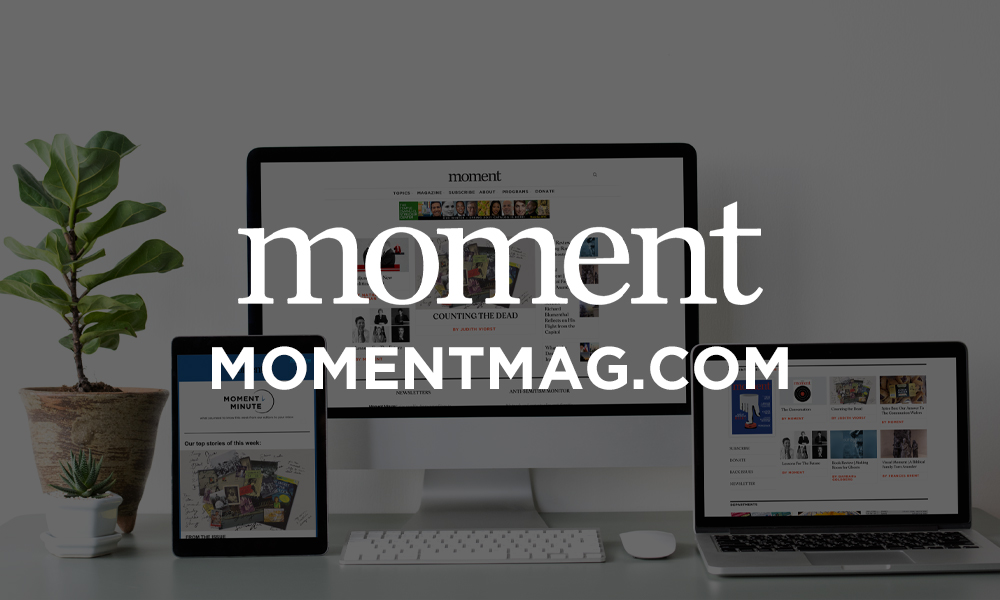 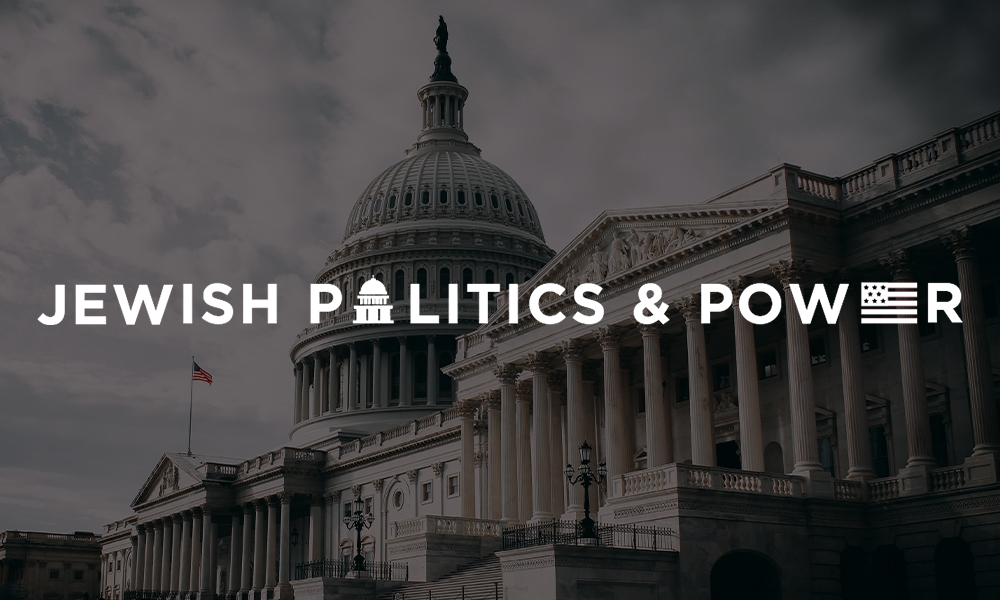 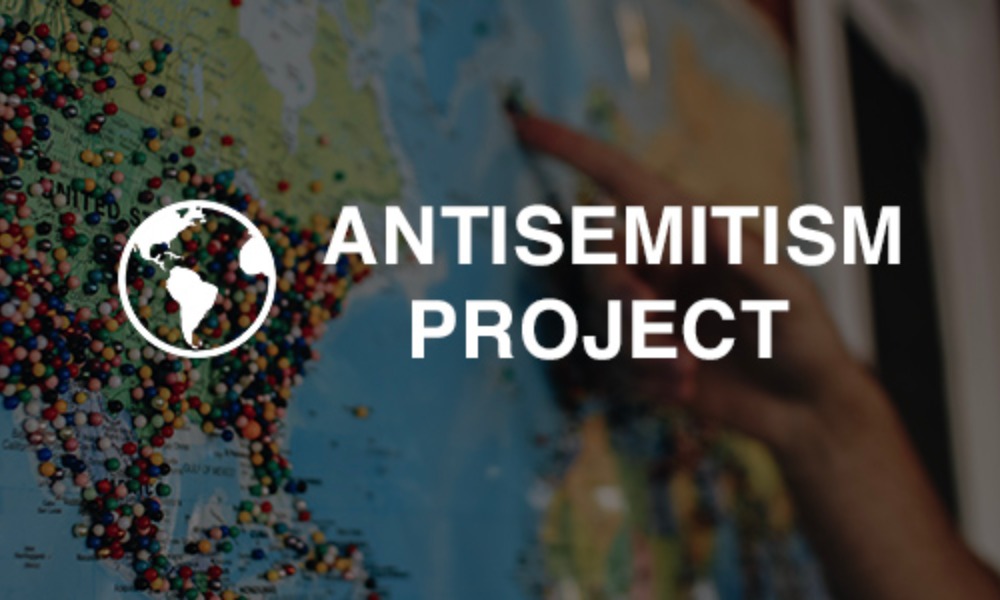 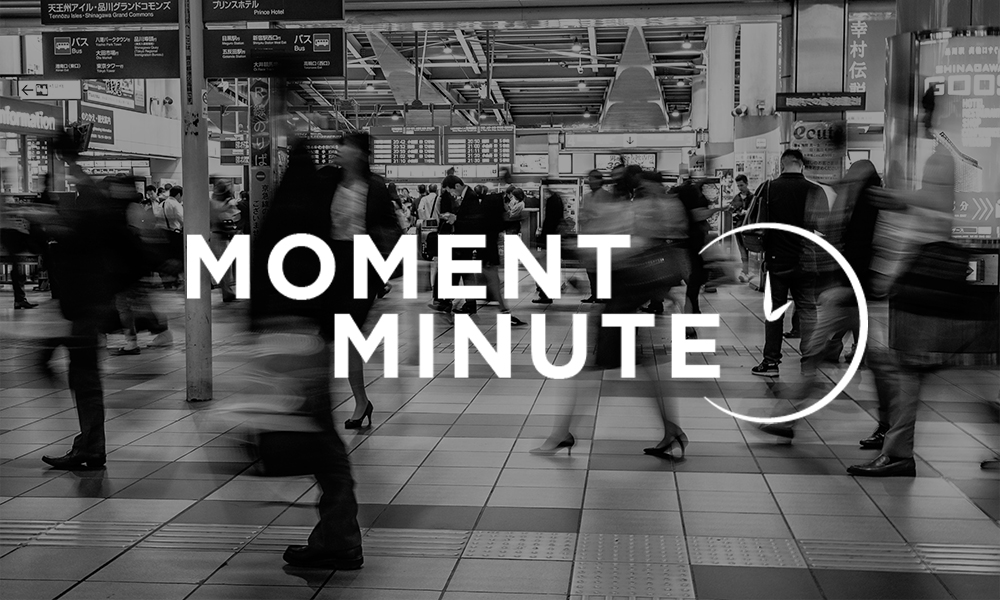 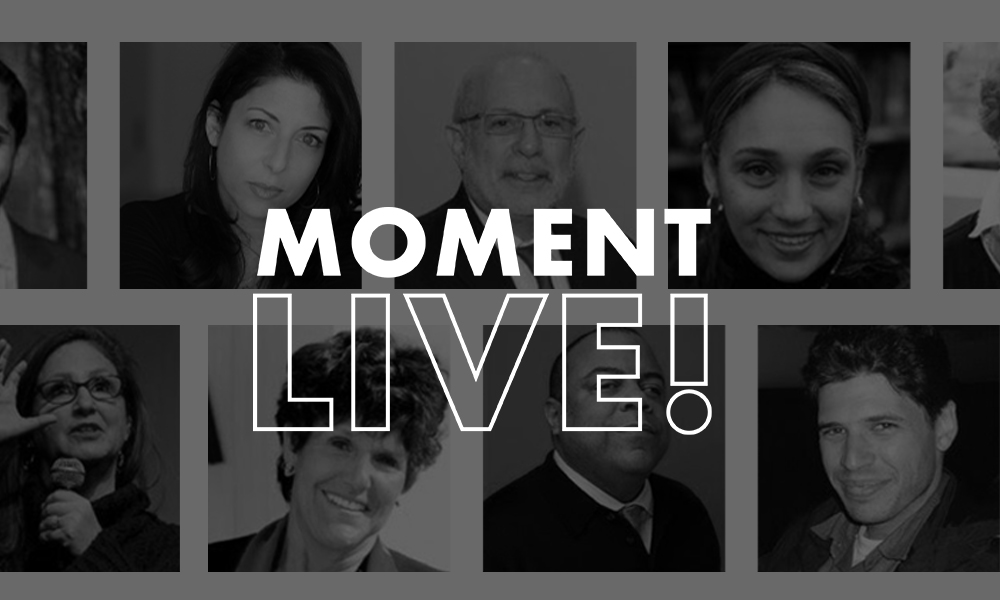 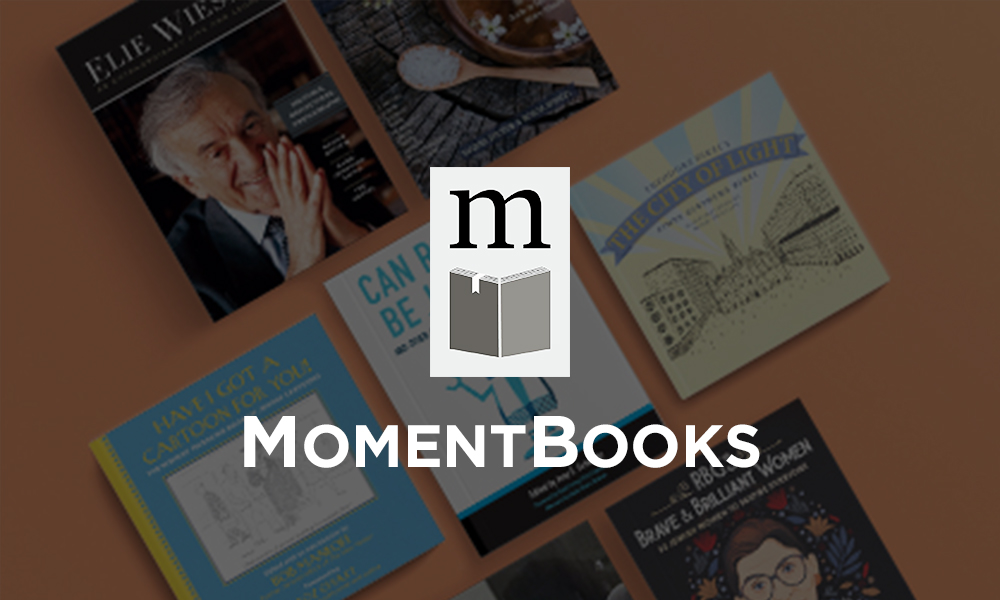 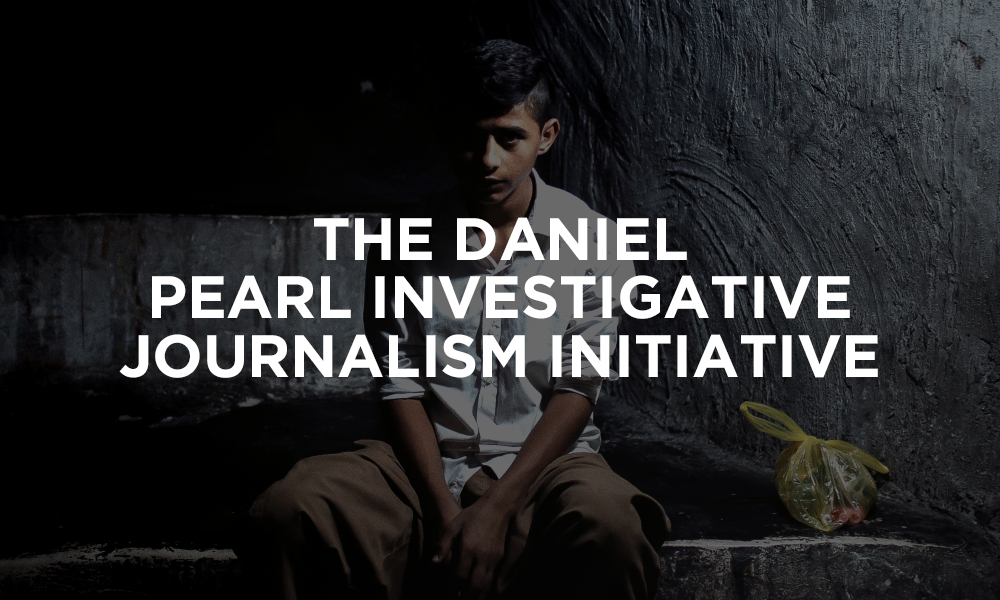 A journalism project exposing deeply ingrained prejudices around the world 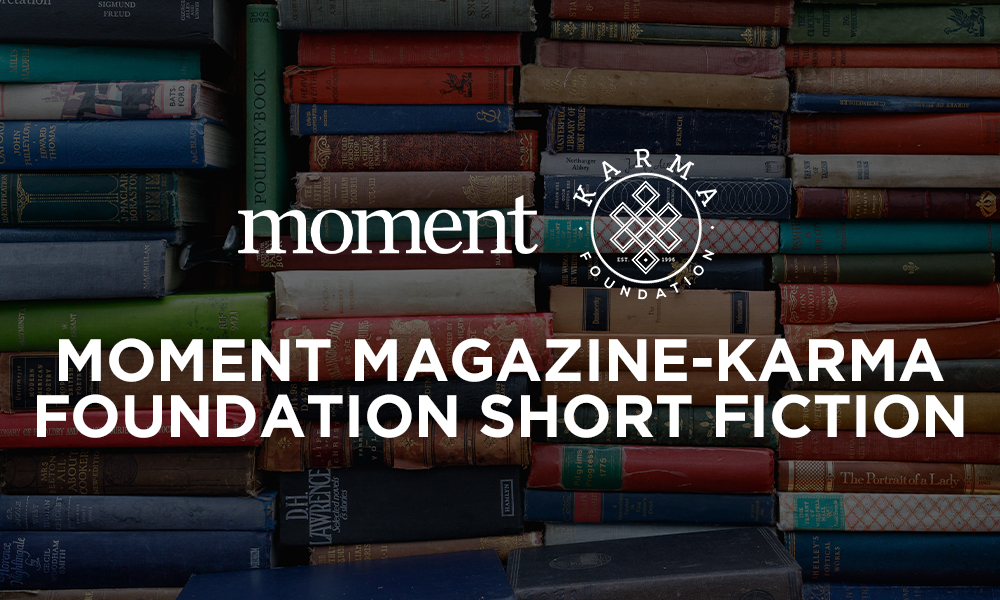 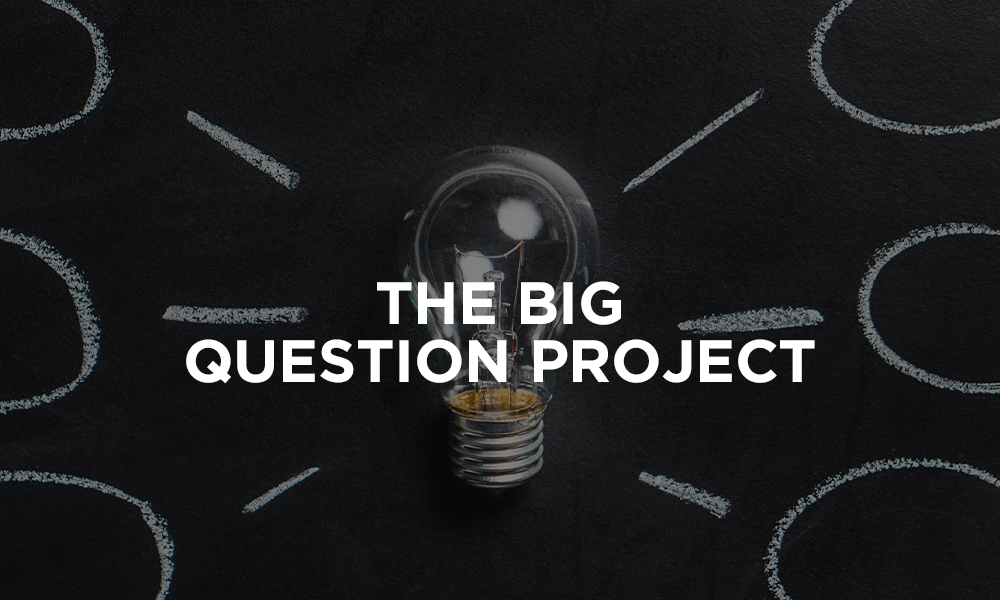 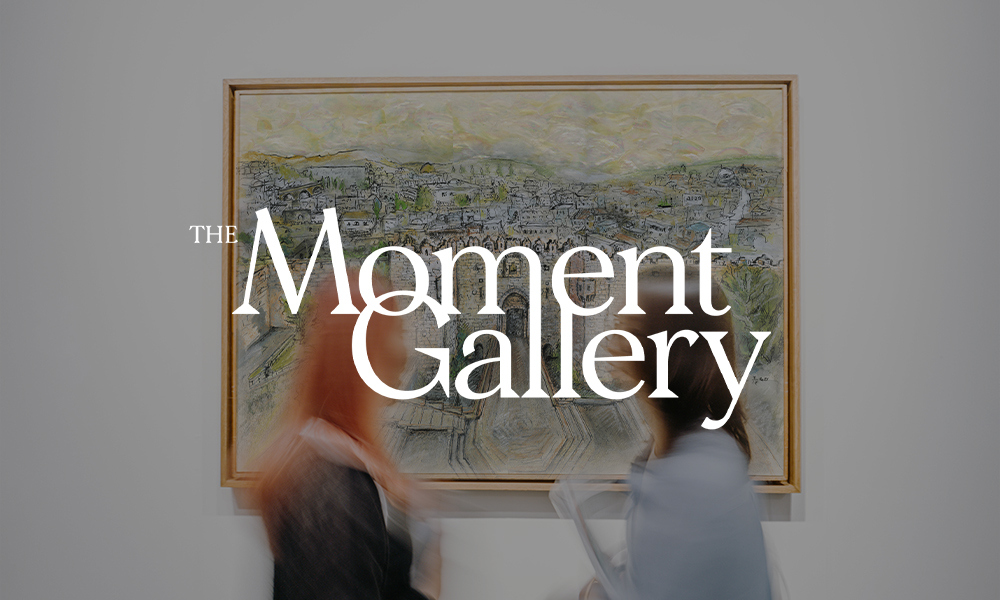 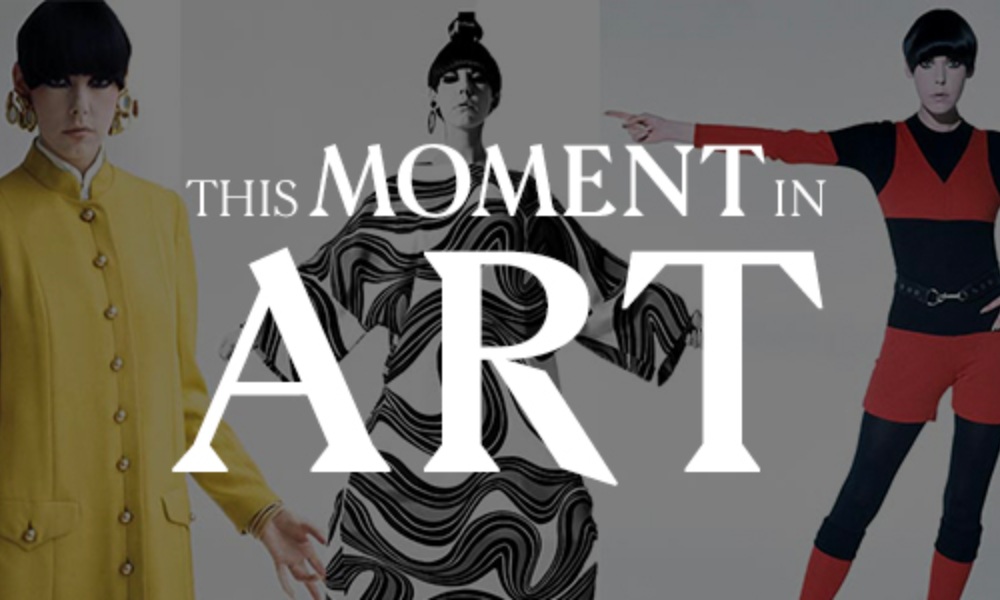 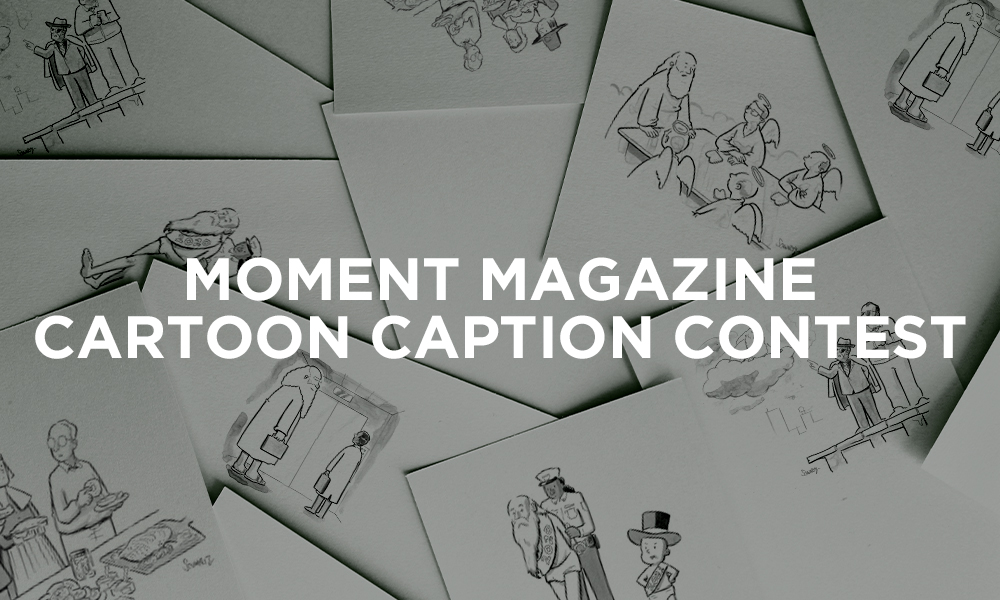 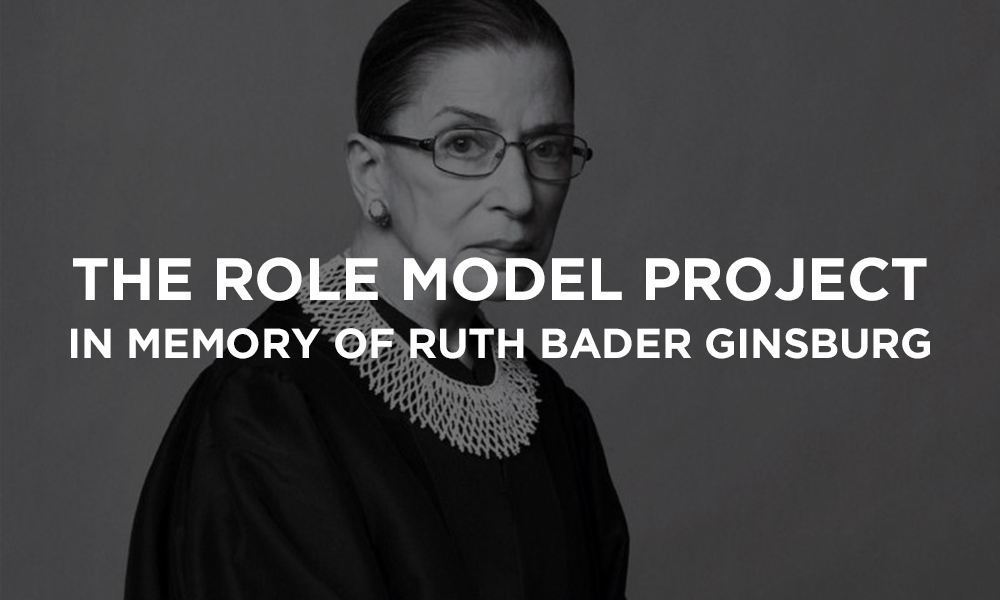 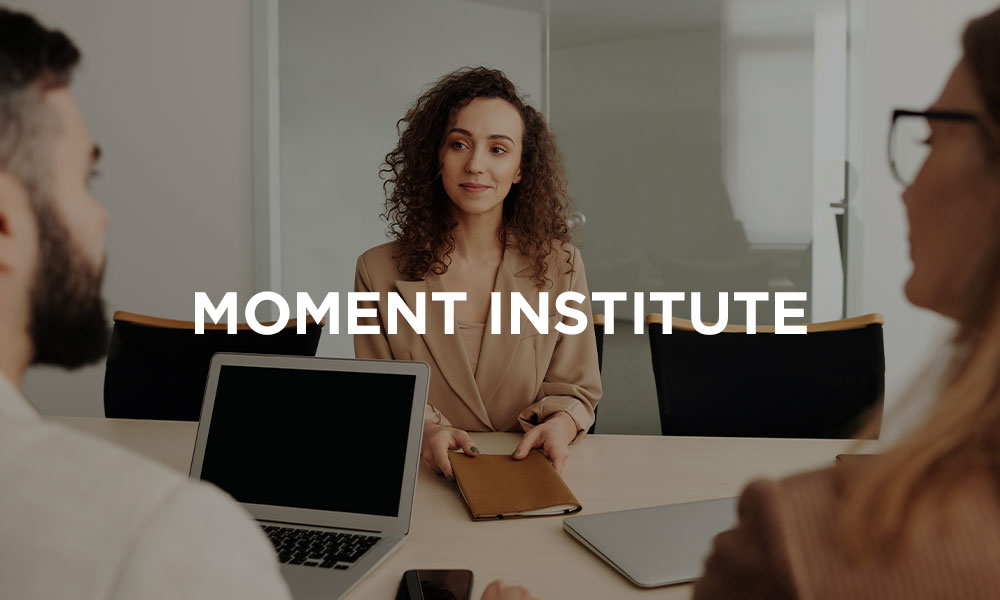 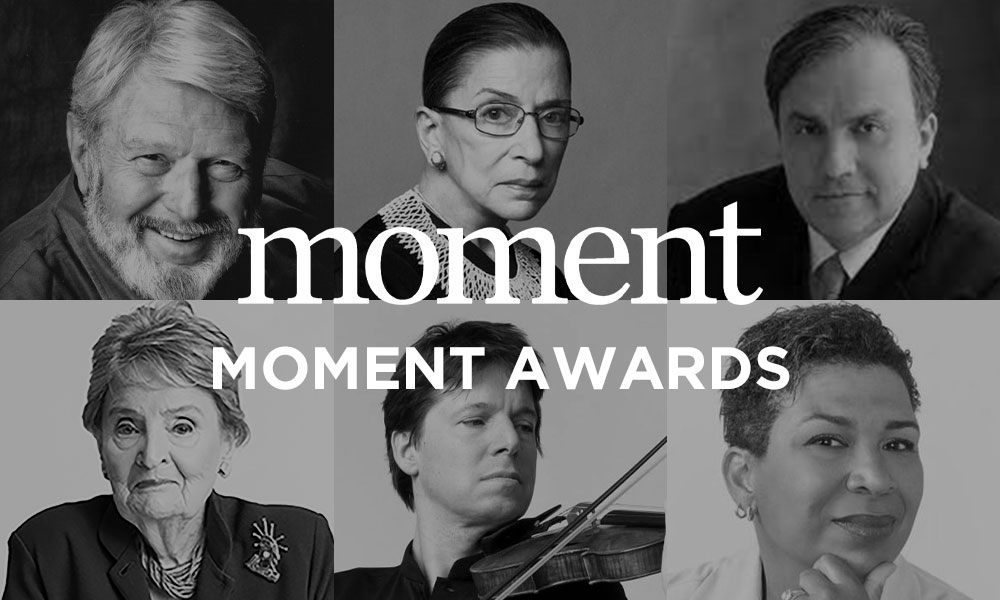 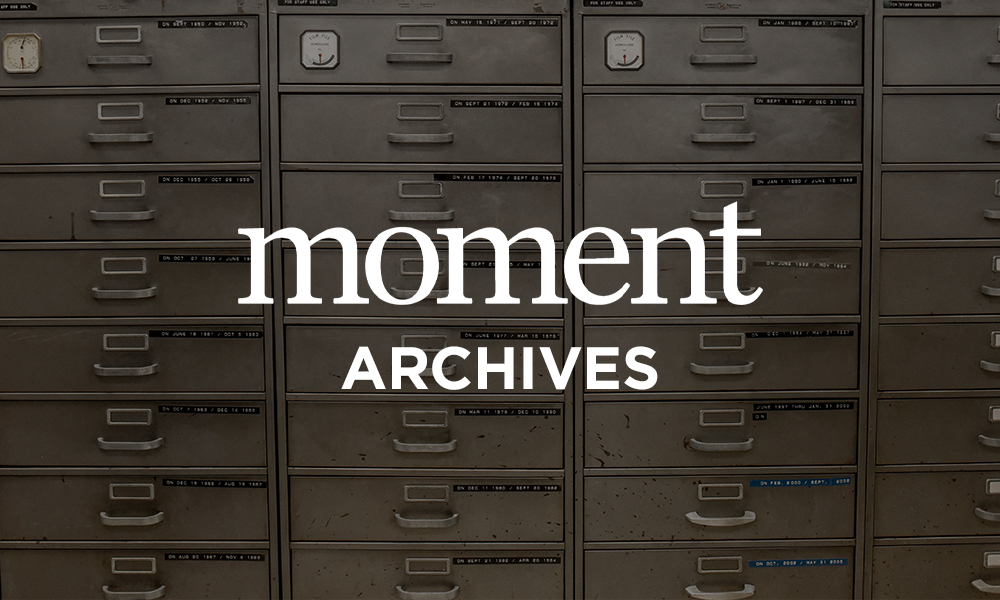 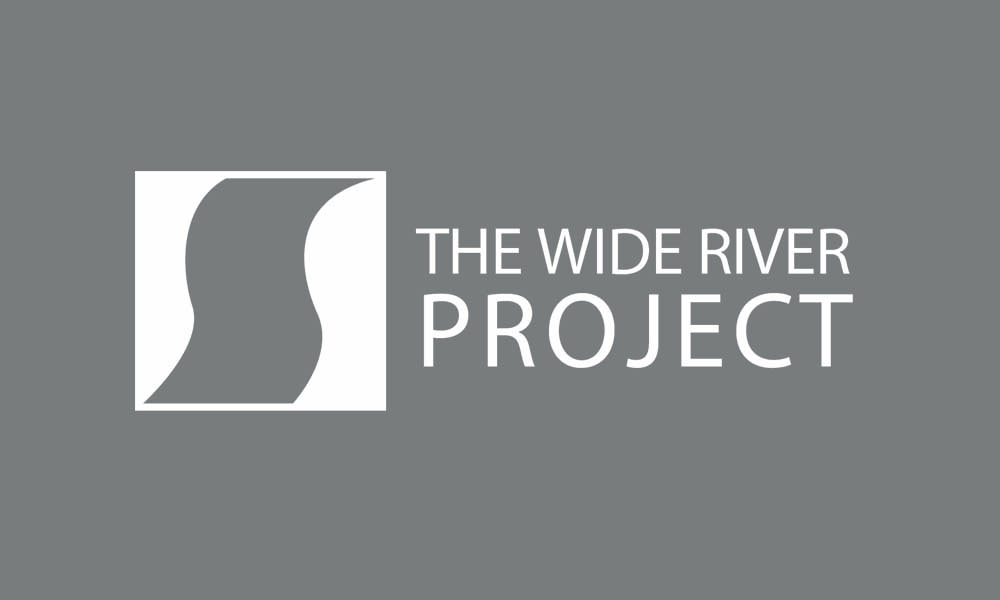 Award-winning journalist Nadine Epstein is editor-in-chief and CEO of Moment Magazine, founder and executive director of the Washington, DC-based Center for Creative Change, founder of the Daniel Pearl Investigative Journalism Initiative for young reporters, and founder and editor of MomentBooks. She reported for the City News Bureau of Chicago and the Chicago Bureau of The New York Times, then later covered the U.S.-Mexico border and rural America. After a Knight-Wallace Fellowship at the University of Michigan, Ann Arbor, she taught in the Masters Program in Journalism there. She holds degrees in International Relations from the University of Pennsylvania, and was a University Fellow in the political science doctoral program at Columbia University. Epstein has written and edited books including RBG’s Brave and Brilliant Women:33 Jewish Women to Inspire Everyone, Elie Wiesel: An Extraordinary Life and Legacy, contributed to anthology collections including Racing in the Streets: The Bruce Springsteen Reader and The Late, Great Mexican Border: Reports from a Disappearing Line, and cowrote the short documentary Sastun: My Apprenticeship with a Maya Healer. Her articles and op-eds have been published in a wide range of publications including The Washington Post, Smithsonian, Newsweek and The New York Times. Epstein speaks internationally about anti-Semitism and other issues pertinent to the global Jewish community, and has been interviewed by The New York Times, The Wall Street Journal, All Things Considered, Al-Jazeera, among other media outlets. She is also an artist, the creator of the iShadow Project and cofounder of TheMomentGallery. Read her writing here. See her upcoming events here.

Sarah Breger came to Moment in 2009 as a Rabbi Harold S. White Fellow and served as Deputy Editor of Moment since 2014. She is also the director of the Daniel Pearl Investigative Initiative. While at Moment she has won numerous awards, including first place for religion reporting of the year from the Religion News Association and first place for Best In-Depth Newswriting on Religion from the American Academy of Religion. She is a graduate of the Columbia Graduate School of Journalism and the University of Pennsylvania. Read her writing here.

Jennifer Bardi worked in science communications at The Scripps Research Institute in La Jolla, California, for over a decade before moving to the DC area in 2006. She was the editor-in-chief of the Humanist magazine for 14 years and for two years served as deputy director of its publisher, the American Humanist Association. Most recently, she was managing editor at Spirituality & Health magazine. She received both a BA in comparative literature and an MFA in creative writing from San Diego State University. She currently lives in Maryland with her husband and their two teenagers.

Noah Phillips has held various roles at Moment for many years, including graphic designer, Rabbi Harold S. White Fellow, freelance contributor, and his current position of digital editor. Noah is also an artist, social worker, and Hebrew school teacher. His digital series on the environment—Groundswell—won the first place Award for Excellence in Writing About Climate Change/Environmentalism from the American Jewish Press Association in 2021.

Amy E. Schwartz received a degree in literature from Harvard University. She worked at Harper’s Magazine and The New Republic before joining The Washington Post, where she was an editorial writer and op-ed columnist on cultural issues from 1985 to 2002. Schwartz has also lived in and reported from France, Germany and Turkey. Read her writing here.

Diane M. Bolz worked for Smithsonian for more than 35 years, where, as a senior editor and arts editor, she commissioned, edited and wrote articles on the fine arts, architecture, performing arts, popular culture and history. Before coming to Smithsonian, she worked in New York City for architects I. M. Pei and Richard Meier. Bolz majored in English and art history at Cornell and Columbia Universities. Read her writing here.

Jody Bolz is the author of the poetry collections A Lesson in Narrative Time, Shadow Play, and The Near and Far. She received her BA and MFA degrees from Cornell University, where she studied with poet A.R. Ammons. She taught creative writing for more than twenty years at George Washington University and edited Poet Lore, America’s oldest poetry journal, from 2002 to 2019. Among her honors are grants from the Rona Jaffe Foundation and the Maryland State Arts Council.

Siegel was the senior host of NPR’s award-winning evening newsmagazine All Things Considered. In 2018, Siegel was awarded the Edward Murrow Lifetime Achievement Award in Journalism. Siegel has been honored with three Silver Batons from Alfred I. DuPont-Columbia University, as well as the American Bar Association’s Silver Gavel Award.

Dina Gold has postgraduate degrees in social anthropology from both London University’s School of Oriental and African Studies and Oxford University. At Oxford, she was the first woman to graduate from Corpus Christi College since its founding in 1517. Her first job in journalism was as a financial reporter on the “Investors Chronicle” in the UK before she joined the BBC to work as an investigative reporter and producer for both radio and television. Gold was also a BBC ombudsman and BBC policy advisor to the British police at Scotland Yard. She is the author of Stolen Legacy.

Diane Heiman is a graduate of Brown University and Georgetown Law School. After practicing law for more than a decade, she wrote five children’s books, winning awards including the prestigious Children’s Choice Award.

George E. Johnson is a Washington-based lawyer and writer. He formerly was Research Director of the Institute for Jewish Policy Planning and Research of the Synagogue Council of America. He is the author of studies on numerous Jewish policy issues, including inter-marriage, Russian-Jewish immigrants, American aliyah, and Israeli negotiations with the Palestinians.

Eileen Lavine has previously worked as a writer and editor for the New Bedford Standard Times, The New York Times Youth Forums, UNESCO and the Marshall Plan Radio Unit, and also served as the president of information services at the Bethesda Editorial Company. She is a graduate of the University of Wisconsin—where she was the first woman editor of the student-run Daily Cardinal—and of the Columbia Graduate School of Journalism.

Francie Weinman Schwartz is a writer and educator specializing in Jewish subjects. She has lectured extensively and serves as a facilitator for a course in Wise Aging at her synagogue, Temple Micah, in Washington, D.C. She received her Master’s Degree in Judaic Studies from Hebrew Union College-Jewish Institute of Religion and is a graduate of the Medill School of Journalism at Northwestern University. Schwartz is the co-author of The Jewish Moral Virtues and A Touch of the Sacred, books she wrote with the late rabbi and eminent liberal Jewish theologian Dr. Eugene Borowitz. She lives in Potomac, Maryland, with her husband Stuart. She’s the proud mother of Dana and David, and three grandchildren, Jonah, Teo and Stella.

Laurence Wolff was previously an education officer at the World Bank and has written and published widely on education policy issues in developing countries. Most recently he has focused on the challenges facing Israeli education, the growth of Reform Judaism in Israel, and the demographic future of Israel’s population. He holds a doctorate in education planning and administration from Harvard.

Nathan Guttman writes Moment’s Jewish Politics & Power. He is the U.S. correspondent for Israel’s public broadcasting corporation and has served as Washington bureau chief for The Forward, Ha’aretz and the Jerusalem Post. His award-winning reporting has included coverage of the highs and lows of the Middle East peace process and the role of Jewish interests in U.S. politics.

Tanya George is a development professional with more than 30 years of experience working with nonprofit organizations. Since 1999, George has worked as a free-lance fundraiser and writer for various groups including Justice at Stake, the ARAVA Institute for Environmental Studies, Wider Opportunities for Women and the Ovarian Cancer National Alliance. From 1988 to June 1999, George served as Vice President for Development for Partners of the Americas, a private voluntary organization that carries out technical assistance and training programs in Latin America and the Caribbean.

Ellen Meltzer has spent more than fifteen years as a marketing and communications strategist. Her international experience includes positions as creative director at Ogilvy & Mather and Leo Burnett in Hong Kong, and writer at J Walter Thompson, Melbourne, Australia. Meltzer joined Moment in 2015.

Special Assistant to the Editor and Event Director: Johnna Raskin

Johnna Raskin is a graduate of the University of Wisconsin-Madison. She previously worked as Senior Press Specialist at the Smithsonian’s National Museum of Natural History and helped launch the National Geographic Channel as Manager of Communications. She joined Moment in 2013.

Debbie Sann’s professional experience includes almost 20 years in marketing, communications and business strategy. Sann is also a seasoned Jewish communal professional and contributed to the Jewish Federation of Greater Washington for almost five years. She earned an M.B.A. from the Columbia Business School and an M.S. from Cornell University.

Pat Lewis is a longtime communications and development professional who has worked with a wide range of nonprofits and government agencies. She served most recently as a consultant for OWL: The Voice of Women 40+, and as communications director for the Council of Large Public Housing Authorities and the American Association of Public Opinion Researchers. A former journalist, she worked in the White House media office under President Bill Clinton. Lewis has a history degree from Duke University and a master’s in political science from Auburn University.

Suzanne Borden worked for many years at Hillel International, overseeing a campus community service initiative and at PANIM: The Institute for Jewish Leadership and Values, coordinating programs for Jewish high school students and writing a service-learning curriculum. Suzanne is an experienced meeting and event planner. She earned her degree in Community and Family Studies from the University of Delaware.

Andrew Michaels was a Moment intern in 2016. Following his graduation from Clark University in 2017, he spent a year in Israel which included a semester at the Conservative Yeshiva in Jerusalem, before spending 3 years working in the not-for-profit sector. He currently lives in central Illinois with his wife, Marisa, and his adopted Israeli dog, Lentil.

Erica Cash is a graduate of Ohio University. She graduated with a bachelor’s degree in Visual Communications with a major in Information Graphics and Publication Design and a minor in Journalism. She previously interned at Necessary Behavior as a graphic designer. She joined Moment in 2022.

Nicole Bowman is an award-winning leader in the field of consumer marketing, fulfillment, and audience development. After having worked as the Consumer Marketing Director for companies including Gruner+Jahr, Dennis Publishing, Cowles Enthusiast, and Spin, Nicole started her own circulation and consumer marketing consultancy. She has launched nearly a dozen titles including OK!, Complex, and The Week. Nicole has also served as Chairman of The DMA Circulation Council and the President of the Media & Content Marketing Association.

“The ghosts of Khan of Ajjur”, Arieh O’Sullivan

“Mine, Mine, All Mine”, Marshall Breger

Religion News Association
First place award in magazine news reporting from the for Prince’s An Uneasy Union, along with awards for Nadine Epstein’s “Evolution of a Moderate” on Mohammed Dajani, and for Michael Orbach’s story “Professor of Disbelief” on James Kugel.